Tuesday was a down day on Wall Street, as investors prepared for the first debate between the two major U.S. presidential candidates. Without too much economic news to drive prices, market participants consolidated some of their big gains from Monday. The Dow Jones Industrial Average (^DJI -1.71%), S&P 500 (^GSPC -1.51%) and Nasdaq Composite (^IXIC -1.51%) were down less than half a percent each.

In the recent past, news about companies deciding to split their stocks has generated a lot of upward momentum. Apple (AAPL -3.00%) and Tesla (TSLA -1.10%) in particular were beneficiaries of the hype surrounding stock splits earlier this summer. Yet today, there was evidence that stock splits don't always work in sending share prices soaring. Below, we'll look at why shareholders weren't as excited about McCormick (MKC -3.05%) as they might otherwise have been.

Shares of McCormick were down nearly 3% on Tuesday. The company announced fiscal third-quarter earnings along with its decision to split its shares, and it seems that investors focused on the risks that the spice maker faces rather than the benefits of making its shares more affordable.

On their face, McCormick's quarterly results looked solid. Sales were higher by 8% from year-ago levels, with strength in the consumer segment offsetting declines in the flavor solutions business, which is geared more toward institutional food company clients. Adjusted earnings per share climbed 5% year over year. Moreover, McCormick expects sales growth of 4% to 5% for the full year. 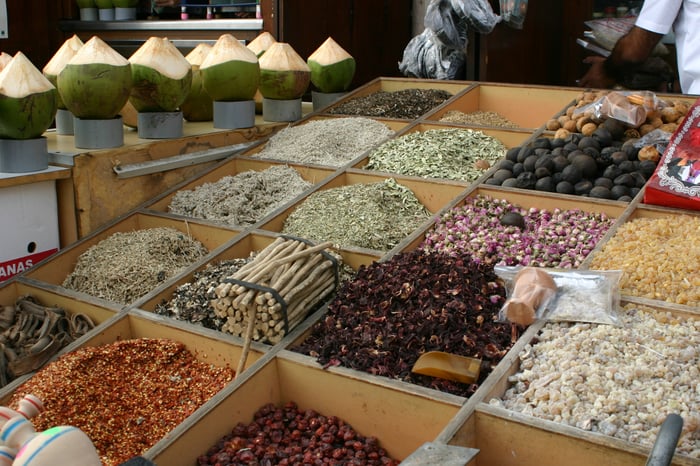 In addition, McCormick approved a 2-for-1 stock split to take effect in November. With the stock price having briefly pushed above the $200 mark a couple of months ago, the board of directors apparently took action to prevent McCormick shares from getting too pricey. It will be the first stock split for the company since 2002.

Yet some consumer-oriented businesses have seen more-explosive sales and earnings gains as a result of the coronavirus pandemic. Certainly for its home-kitchen spice business, stay-at-home orders could have been a big sales driver. In that light, single-digit-percentage sales gains might not have been enough to satisfy growth-hungry shareholders.

Getting tired of splits

Some would've expected McCormick stock to rise solely because of its stock split announcement. But the experience of the past couple of months might well be a reminder of the uncertain impact that splits have.

Apple's experience certain plays out some of the risks involved with split-related hype. After announcing the split in late July, Apple's stock climbed above the split-adjusted price of $100 per share for the first time. It eventually topped out at nearly $138 right after the split. Since then, the tech stock is down 17% and went as low as $105 per share in the recent correction.

Tesla hasn't given up as much of its gains, but it's still been volatile after its split. After having pushed above $500 per share immediately after the split took effect, Tesla quickly lost a third of its value. The stock has recovered about half of those losses but is still more than 15% below its highs.

As we have said time and time again, there's nothing about stock splits that has any impact on fundamental business value. The pullbacks we've seen in Apple and Tesla and the lack of response over McCormick's split announcement suggest that investors are coming to realize that fact now.

Editor's note: A previous version of this article incorrectly stated that this would be McCormick's first stock split. The author and the Fool regret the error.

Markets Bounce Back After Yesterday's Decline

Stock Market Today: Why Walgreen and McCormick are on the Move