After a price surge in 2020, investors may be hesitant to pick up shares today.

As volatility -- and selling pressure -- have reasserted themselves in September, investors are once again finding it difficult to get a sense of the market's current direction. Will October bring more stability to the markets, or are we possibly heading toward a near-term correction?

A small, sustained market downturn might be welcome news to investors who have been eyeing a number of high-quality stocks in recent months. For example, payments transactions giant PayPal Holdings (PYPL -4.93%) has lost 5% of its share value during September, yet its stock is up nearly 80% year to date, moving it squarely into the "watchlist" column for those who meant to purchase it during the year but never quite pulled the trigger. Below, let's review key reasons why investors shouldn't wait too long to at least start building a position in this dynamic transactions platform. 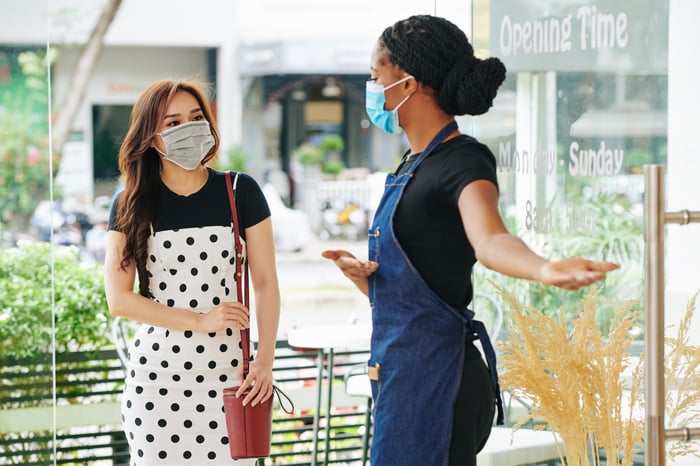 Long-term tailwinds from the pandemic

PayPal's most recent earnings report, issued at the end of July, contained a number of metrics that showed what a tremendous advantage the company has reaped out of the COVID-19 pandemic. Importantly, PayPal expanded its year-over-year total payments volume, or TPV (the total dollar volume of transactions occurring over its platform), during the second quarter of 2020 by 29%, to $222 billion. The company added 21.3 million new users during the period, its biggest-ever haul of net new active accounts (NNAs). According to management, the organization is on track to add an enormous 70 million NNAs this year.

Obviously, the explosion in digital commerce during the pandemic has been a boon to PayPal. But how long will this wave of new accounts and heightened transaction activity last? Inevitably, PayPal's revenue growth and free cash flow generation will normalize. The company posted 22% year-over-year revenue growth, to $5.6 billion, in the second quarter, while free cash flow soared by 112% to $2.2 billion. Before the pandemic, PayPal was generating annual revenue growth in the mid- to high teens.

A widening merchant network, and a payment technology shift

Even as growth reverts to the mean, it's possible PayPal could maintain a revenue expansion rate near 20% for some time to come. The company is widening its competitive moat through a strengthening of its network effect, as the rank of users and merchants swell -- PayPal added 1.7 new merchants to its platform in the second quarter. More importantly, management is allocating significant resources to services that will benefit from pandemic conditions for at least another year, while maintaining sustained demand afterward as customer purchasing habits shift.

The most salient example of this is the potential for contactless payment. Research has shown that consumers have developed an understandable aversion to handling cash and swiping debit and credit cards on merchants' readers during the pandemic. These habits may endure long after a probable global vaccine rollout next year. PayPal is in the process of providing QR code functionality internationally with merchants to allow customers to point their phones at checkout scanners in stores.

Enabling QR code payment has significant implications for PayPal's bottom line over the long term, as it will help the company more quickly monetize its popular social payments app, Venmo. Last quarter, Venmo's TPV soared by 52% to $37 billion. Encouraging Venmo's customer base to use the app for in-store purchases will increase PayPal's overall take rate, that is, the amount it makes on each transaction that flows across its platform.

Of course, there is one daunting hurdle to investing in PayPal today. Its phenomenal appreciation so far this year has pushed key valuation metrics above their usual levels. The company now trades at 51 times forward one-year earnings; typically, its forward price-to-earnings ratio hovers in a range of 30 to 40.

However, PayPal has realized so many unexpected tailwinds during the pandemic (most notably, its explosion in new users and merchants) that its earnings potential has increased commensurately. The company should be able to improve the earnings in its price-to-earnings ratio over the next few years at a faster rate than its pre-pandemic cadence. In other words, this ratio should fall back to historical levels over the next several quarters.

It's hard to overstate the durability of PayPal's new revenue drivers. Undoubtedly, a small group of asset-light software-as-a-service companies have generated extreme investor interest this year. But many of these companies will see momentum slip a bit as remote-work demand trends normalize. PayPal, on the other hand, is likely to remain in a higher gear for the foreseeable future.