The next market crash could be just around the corner. Or it might be years away.

That uncertainty is the best reason to try to own businesses that can thrive through even the worst selling conditions. Income investors are especially keen to this risk since they count on steady dividend growth to support their returns.

Most companies that have earned their place as Dividend Aristocrats (by counting at least 25 consecutive years of annual payout boosts) can be reasonably expected to make it through another recession. They've survived several in the past, after all.

But Lowe's (NYSE:LOW) stands out for a few reasons as a particularly strong dividend stock heading into a potentially rough economic environment. 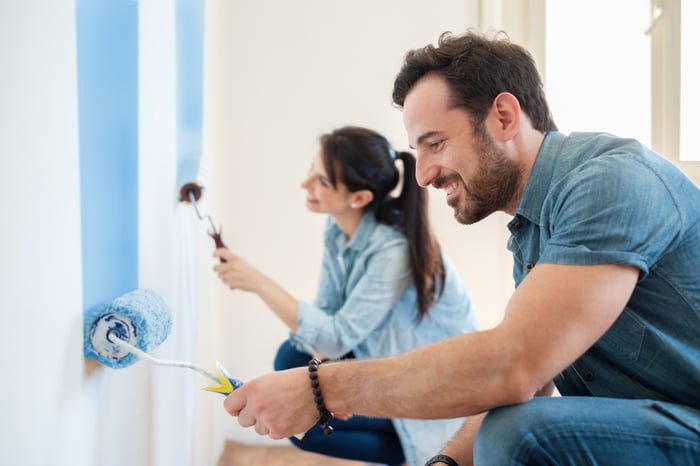 Better than the best

Scan the 66 current members of the Dividend Aristocrat list and you might notice a conspicuous absence. Target is there with its chief rival Walmart. The same goes for Coca-Cola and PepsiCo. But Lowe's is alone as a big-box home improvement retailer. Its larger competitor Home Depot (NYSE:HD) hasn't made the cut.

That's because the retailer was forced to pause dividend increases during the worst years of the housing industry crash in 2007 through 2010. That period saw sales, earnings, and profitability metrics all plunge by more than 40%. And yet Lowe's continued boosting its dividend through this once-in-a-lifetime slump.

One key reason for this gap is Lowe's more conservative approach that targets 35% of earnings as annual dividend payouts. Home Depot's goal is an aggressive 55%. That difference helps support the industry leader's stronger overall returns during expansions but leaves it more exposed during those inevitable downturns.

Good for its own reasons

Yet Lowe's is an attractive dividend stock for more than just its defensive qualities. The industry's No. 2 player is steered by a former Home Depot executive who appears to be closing the performance gap with his past employer.

In fact, Marvin Ellison has led the company through two consecutive quarters of faster sales growth. Most recently, Lowe's landed a 35% comparable-store sales spike compared to 25% at Home Depot thanks to wins in a few categories including e-commerce and the booming professional contractor niche.

Lowe's still trails its chief rival in the key financial metrics of operating margin and return on invested capital. But the trends are moving in the right direction. 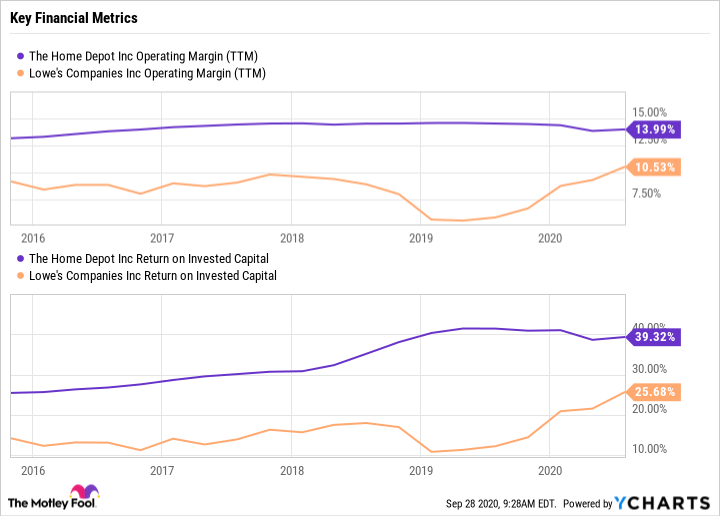 Soaring demand for home improvement products should lift Lowe's results at least into early 2021. The latest industry data points to significant strength in the housing market, too, thanks to historically low mortgage rates.

But Lowe's has demonstrated that it doesn't need such an incredibly supportive selling environment to produce solid returns for the business and for its shareholders. The retailer is closing in on 59 consecutive years of dividend raises, making it a true overachiever both in the wider stock market and in the home improvement niche.

Even if a global recession grips the industry at some point over the next few years, Lowe's investors should be celebrating that streak hitting 60 years before too long.