In general, investors have shied away from GE over the past few years, but some may be ready to reconnect. Robinhood investors like it. Are they making a good call?

One of the original 12 companies making up the Dow Jones Industrial Average, General Electric (GE -2.36%) long held a place among the most venerated companies in the stock market. Nowadays...not so much. It lost its place on the Dow to Walgreens Boots Alliance in 2018, and over the past three years, its stock has plummeted by 75%.

But investor sentiment regarding GE may be shifting. It's now one of the 100 most popular stocks among users of the Robinhood trading platform, and the online brokerage notes that 63% of the analysts who it tracks rate the stock favorably. With new attention growing for this old name, this is an apt time to look at some of the things potential investors should be aware of before they add GE to their portfolios. 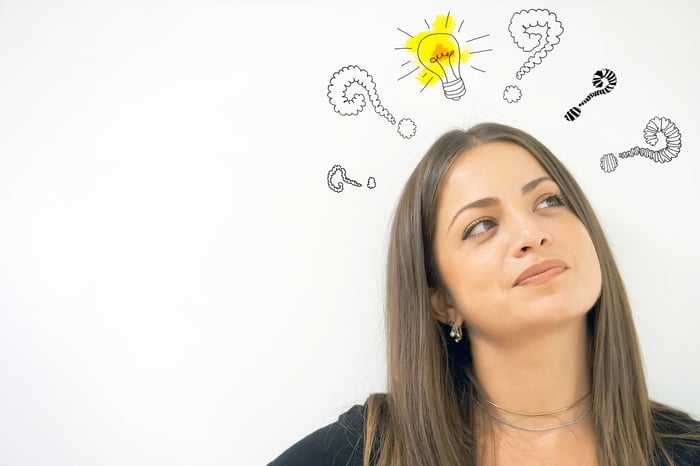 Like so many other companies that fell into financial distress in 2008, GE's balance sheet grew increasingly tenuous. During the height of the Great Recession, the company's total debt, for example, ballooned to nearly $524 billion. Over the last 12 years, however, the company has taken aggressive actions to shore up its finances. For instance, in 2015, the company divested $157 billion in assets from its financial services arm, GE Capital.

To the chagrin of dividend investors, GE cut its quarterly distribution twice in 2018 to preserve cash. However, while the quarterly dividend is now $0.01 per share -- a drastic reduction from the $0.24 per share it was returning to shareholders in 2017 -- the company's balance sheet is on a much firmer footing. At the end of the second quarter of 2020, GE had $82 billion in total debt and $41 billion in cash on hand.

The winds of change

For those who haven't recently had GE on their radars, its improved financial position may come as a surprise. So might the company's greater focus on renewable energy. For years, GE has been a recognizable name in the wind industry as a major global supplier of turbines. But a recent announcement highlights its commitment to clean energy: GE will no longer build new coal plants.

Addressing the decline of the coal industry and the growing opportunities in wind power, Russell Stokes, president and CEO of the GE Power portfolio,  was quoted as saying that the company is "focused on power generation businesses that have attractive economics and a growth trajectory." As countries endeavor to meet the goals of the Paris Climate Agreement, wind power is gaining a greater presence in the global energy landscape. According to market research firm Mordor Intelligence, the combined onshore and offshore wind turbine market is expected to grow at a compound annual rate of more than 10% from 2020 to 2025.

Demonstrating its leading position in the wind industry, GE announced last week that it had finalized contracts to be a key vendor for what will be the world's largest offshore wind facility, Dogger Bank Wind Farm in the United Kingdom. In addition to a five-year service agreement, GE will supply 190 Haliade-X wind turbines for the installation.

Although GE appears to have charted a new course in the right direction by eschewing coal and embracing renewable energy, those who invest in it will undoubtedly have to be prepared to withstand volatility in the near term due to the challenges facing the aviation industry. Over the past six months, GE has reported an 89% decline in segment profit in aviation compared to the same period last year. And it doesn't seem like that business will be bouncing back in the near future. The company also reported a 35% decline in orders from its aviation segment compared to the same six-month period last year.

Despite the challenges, the company remains committed. On the Q2 conference call with analyts, GE CEO Larry Culp acknowledged the headwinds facing aviation. "We're planning for a steep market decline this year and likely a slow multiyear recovery," he said. "Long term though, the aviation market has solid fundamentals, and we're committed to protecting the future of this business and our leadership position within the industry."

Is GE a good idea after all?

With its focus on renewable energy and its decision to stop catering to the shrinking coal industry -- in addition to its stronger financial position -- it's understandable why investors have grown so interested in GE's stock lately. For investors with a higher tolerance for risk and a willingness to weather near-term volatility, GE seems worth considering.