Congress could send Americans another multi-trillion-dollar relief bill. Here are the stocks that will benefit.

Investors have been walking on eggshells waiting for news out of Washington this week.

Stocks have largely soared on anticipation of a second stimulus package out of Congress, likely to be worth between $1.5 and $2 trillion. If it passes, it will include another round of $1,200 checks for individuals -- Treasury Secretary Steven Mnuchin said he and House Speaker Nancy Pelosi had come to an agreement on that measure. While the two parties are still at odds on other components of the relief deal, including the size of the funding, political interests seem to be pushing Congress to get it done before the election.

Over the five sessions ended October 1, the S&P 500 gained 4.1% while the Nasdaq Composite jumped 6.1% on hopes for more stimulus. 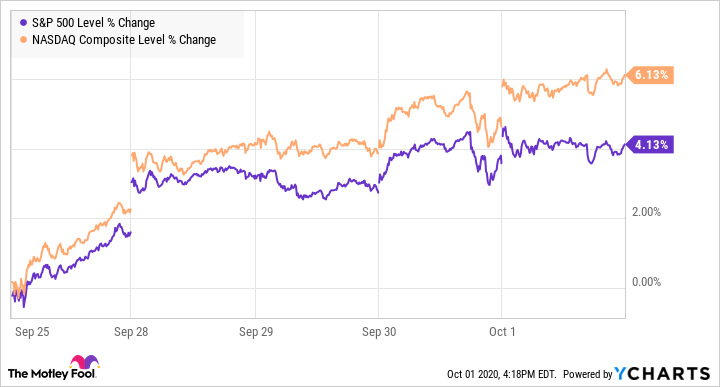 Keep reading to see three stocks that look well-positioned to jump on a second stimulus package. 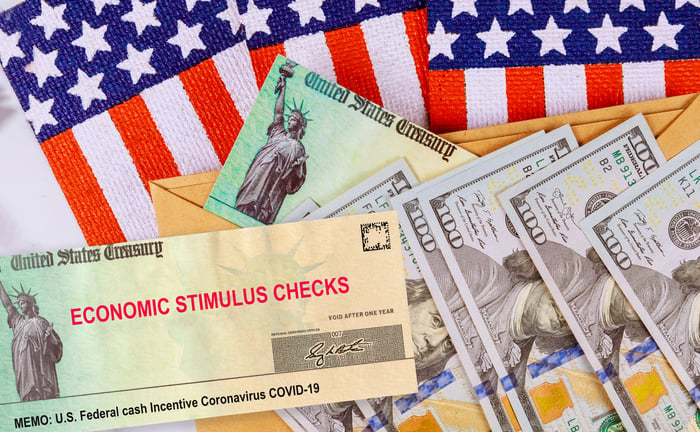 ANGI Homeservices (ANGI 8.25%), the parent of Homeadvisor, Angie's List, and Handy, has been in high demand during the pandemic. Spending on home improvement has spiked during the crisis -- Americans have limited options for discretionary spending and have focused on upgrading their homes, since social distancing rules have meant that people are spending more time at home than usual. CEO Brandon Ridenour acknowledged that the first stimulus bill, the CARES Act, helped drive spending on ANGI's platform, and demand on its marketplace has hovered around 30% growth on average from May to August, showing a surge in interest for its home services.

Revenue has not grown as fast, as the company's demand has historically outstripped its supply of home-services providers, but another direct payment check would likely be used by millions of Americans on home improvements, and some of that money will flow to ANGI Homeservices.

DraftKings (DKNG 0.59%), the online sports gaming company, has been one of the big winners of the year. The company went public through a special purpose acquisition company (SPAC) in April, and the stock has more than tripled since the deal was completed. Online sports betting has taken off this year due largely to relaxed regulations, but the pandemic has also boosted interest in gambling -- the stock market has also seen a wave of new interest among retail investors, who have begun trading on Robinhood and other platforms. Dave Portnoy, the Founder of Barstool Sports, seems to typify this kind of bettor/trader, as he's also the head of Davey Day Trader Global (DDTG).

Some Americans chose to invest the stimulus money rather than spend it, and the jump in stocks over the last six months has only encouraged new investors. A second wave of stimulus, including direct payments, could do the same for both the stock market and sports betting, especially with pro and college football in full swing, and the NBA Finals and MLB playoffs now taking place.

Fast-food restaurants were one of the earliest beneficiaries of the first stimulus package, as restaurants, especially low-priced ones, tend to be some of the most sensitive businesses to fluctuations in discretionary income. When consumers have a few extra dollars in their pocket, they'll likely spend on eating out, giving themselves a simple, convenient reward.

Wendy's (WEN -0.07%) seems well-positioned to benefit from a second round of stimulus, especially from excess unemployment insurance and the $1,200 direct payments. Most of the fast food chain's restaurants are located in the U.S., making it more sensitive to domestic macroeconomics than competitors like McDonald's and Burger King-parent Restaurant Brands International, with which it competes directly in areas like its value menu.

Wendy's stock is roughly flat year-to-date, but domestic comparable sales rebounded quickly after diving 14% in April -- they fell just 1.9% in May, and by July were up 8.2%, a recovery that owes at least partly to the CARES Act, in addition to the reopening of the economy. That's a sign that the company is poised to deliver a strong third-quarter earnings report, and another stimulus package would only help the company carry that momentum into the fourth quarter, propelling the stock higher.