Even a broken clock is right twice a day. The repeatability of this blogger's investing results has yet to be verified.

The value-minded stock-picking approach that Warren Buffett -- the world's most consistently successful investor -- uses to pick stocks is rarely critiqued, publicly or privately. That is, until recently, when it was challenged by a guy who's only been in the market for four months.

That guy is David Portnoy, the founder and chief of the often-controversial sports blog website Barstool Sports. Barstool Sports also dabbles in sports betting, but with most sports shut down right now due to the coronavirus, Portnoy has taken to day trading. He feels he's pretty good at it too, saying several days ago in a video posted on Twitter: "I'm being modest when I say I'm the world's greatest day trader. My unlimited money has upgraded to infinity money." A few days later he argued: "There's nobody who can argue that Warren Buffett is better at the stock market than I am right now. I'm better than he is. That's a fact." Other comments Portnoy made about Buffett aren't quite suitable for print.

And to be fair, David Portnoy probably has logged some of the fantastic returns he's been touting of late. The market has made pretty incredible moves just since March's low, with the S&P 500 rallying 44% from that low to last week's high. A handful of names fared even better. It's certainly been possible. 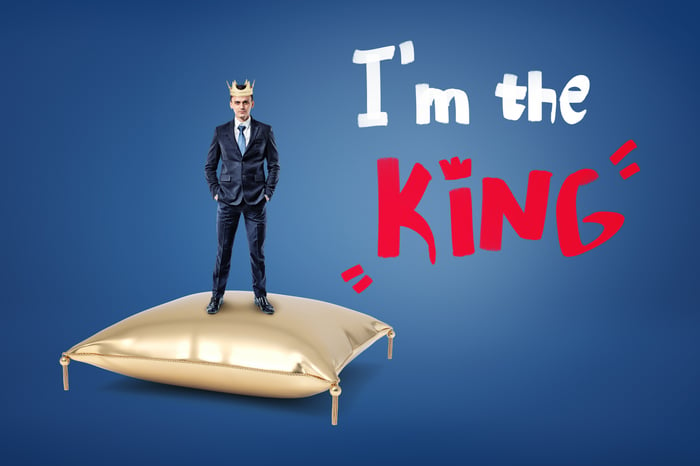 The market environment since late February has been unlike anything we've ever seen before, however, and the situation that's making stock picking easy (and profitable) for Portnoy now may never be seen again in our lifetimes.

All the classic symptoms

The hubris Portnoy has put on display in recent weeks isn't uncommon among new traders. Indeed, Barstool Sports' founder's words are almost textbook-perfect examples of some of the classic psychological stumbling blocks encountered when trying to outguess the crowd rather than simply owning stakes in good companies. Three come to mind:

Are you starting to see the connection between Portnoy's comments and these psychological premises? After a mere four months in the market (he reportedly only ever owned just one stock before February), Portnoy hasn't had enough time to learn the pitfalls most short-term traders don't embrace until they're forced to do so. It's been "easy" simply because he's been lucky enough to step into a red-hot rising tide that's lifted all boats, with some being lifted more than others. The past four months, however, have been an extraordinary exception to the market's norm. Usually, the market doesn't dish out such enormous, unfettered swings.

Not apples to apples anyway

Then there's the 800-pound gorilla in the room David Portnoy isn't talking about: He and Buffett aren't actually trying to do the same thing.

Portnoy's goal is maximizing realized gains without any apparent regard for the unique tax liabilities resulting from short-term trades. He's also doing it for his personal portfolio, which may be sizable, but certainly isn't anywhere close to being on par with the nearly $200 billion worth of stocks currently held by Buffett's Berkshire Hathaway (BRK.A -0.97%) (BRK.B -0.81%). With positions that big, getting into or out of them can cause big price swings that work against Buffett.

In other words, Portnoy can buy and sell without moving the market or creating a tax liability for others. Buffett's Berkshire can't -- not that it would, even if it could. Remember, Berkshire Hathaway's portfolio and privately owned holdings are also used as a backstop of sorts for Berskhire's enormous insurance operation, and are focused as much on driving reliable dividend income as they are on creating capital appreciation. Whereas Portnoy can suffer a little volatility in his principal balance from one quarter to the next, Berkshire aims to keep that to a minimum.

Portnoy's still managed to inspire a crowd of other traders, of course, plugging into followers of his sports-related commentary and sports betting groupies. Stock-trading is an accessible alternative for most of those people, and many have sung his praises. The self-congratulatory euphoria is so thick that even some buy-and-hold die-hards might be thinking of switching gears. There's certainly no denying the market now feels more like a casino than it ever has.

Resist the temptation though, and for that matter, dismiss any notions that you're missing out on anything by being less active and exercising patience. What's working for Portnoy now won't work in perpetuity because the underlying market environment making it possible will eventually change. The stock-picking regimen that works for Buffett and his fans has worked for decades specifically because it's not impacted by those environmental changes.

Or if that doesn't convince you, ask yourself this: Does Portnoy have something to gain by touting his trading success as he bashes Buffett? He seems to, as most proprietary traders prefer to remain secretive about their activities just to avoid competing with the crowd. Buffett, meanwhile, lets his results speak for themselves.

Let's see where David Portnoy's trading portfolio stands in a few months, after the backdrop changes.