The company is being just as assertive expanding its presence abroad as it is in the U.S.

Continuing in its apparent quest to blanket the entire world with its plant-based protein comestibles, Beyond Meat (BYND -4.27%) has signed a new deal in the U.K. with a major supermarket operator and a restaurant chain.

The company announced Thursday that its Beyond Burger has hit the shelves of 372 stores operated by Sainsbury, a popular and well-established British grocery chain. Additionally, it will supply that product to 41 Gourmet Burger Kitchen restaurants.

The company did not provide the financial terms of the deal. 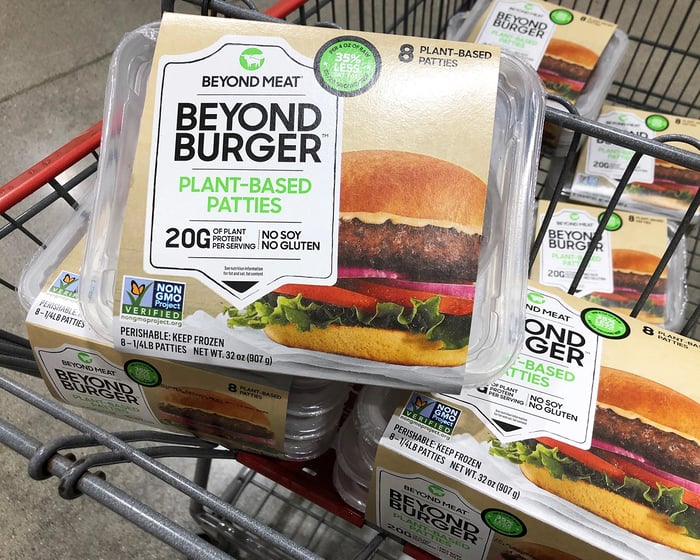 The news comes shortly after Beyond Meat announced the expansion of a big supply deal in the U.S., in which it will provide Beyond Burger products to over 2,400 Walmart outlets. Previously, the arrangement with Walmart covered 800 stores.

The Sainsbury and Gourmet Burger Kitchen deals lengthen an already considerable list of supermarket and restaurant supply arrangements secured by Beyond Meat. That considerable widening of its presence on store shelves and restaurant menus continues to juice the company's top line; in its latest reported quarter, it posted a year-over-year revenue increase of 69%, although it continues to book frequent bottom-line losses.

There is some urgency to Beyond Meat's aggressive efforts at both domestic and international expansion. Competitors with similar plant-based imitation meat products are also making headway with both supermarkets and restaurants. Among others, privately held Impossible Foods has managed to lift its presence in both segments.

Meanwhile, well-capitalized corporations are crowding into the space; to name but two examples, Hormel and Kellogg have, or are rolling out, new alt-meat products.