It could take the food delivery merger longer to realize the promised synergies.

Uber Technologies' (UBER -2.75%) $2.6 billion buyout of Postmates might not generate the kinds of profits investors were expecting. In a filing with the Securities and Exchange Commission, Uber said Postmates has an accumulated deficit of nearly $1 billion, meaning even a pandemic-fueled increase in demand saw the food delivery specialist recording losses of $32 million in the second quarter. 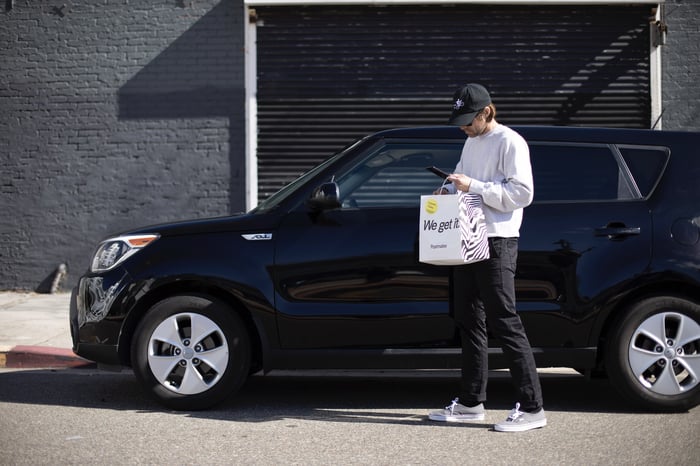 According to Uber, Postmates saw a 125% increase in revenue during the period as sales jumped from $71 million to $160 million. And though that allowed it to slash its losses for the quarter, it indicates that even during a period of unprecedented consumer demand, Postmates is still a money-losing operation.

That's not much different from Grubhub (GRUB), which despite seeing a 41% jump in second-quarter revenue, recorded a $0.17 per share loss for the period. Uber has said further consolidation will be necessary for the industry to reach its full potential.

Postmates management did offer a "base case" scenario that sees it generating $4 million in adjusted earnings before interest, taxes, depreciation, and amortization (EBITDA) next year, which will grow to $85 million in 2023, with an "upside" scenario foreseeing an increase to as much as $109 million within three years.

The SEC filing also disclosed Postmates received two offers from special purpose acquisition companies this summer that assigned an enterprise value of $2.5 billion and $2.3 billion to the food delivery company, and it revealed the Federal Trade Commission issued a second request for information surrounding the merger.

While a second request doesn't mean the agency will oppose the deal, it does mean it could potentially hurt competition in the food delivery marketplace and may require concessions before being approved.

Why Uber Stock Was Slumping Today
370%