The underdog chipmaker's turnaround could continue throughout 2021.

Advanced Micro Devices' (AMD -2.51%) stock surged more than 180% over the past 12 months as the chipmaker continued its multiyear comeback. Shares of its chief rival, Intel (INTC 1.65%), stayed nearly flat. Let's look back at why AMD impressed the bulls and where its stock could be headed over the next year.

When Dr. Lisa Su took over as AMD's CEO in late 2014, the chipmaker was struggling to compete against Intel in the CPU market and NVIDIA (NVDA -2.81%) in the GPU market.

To catch up, Su leveraged the growth of AMD's enterprise, embedded, and semi-custom (EESC) unit -- which generated most of its revenue by selling APUs for Sony's (SONY -0.71%) PS4 and Microsoft's (MSFT -2.36%) Xbox One -- to support the development of new CPUs and GPUs to counter Intel and NVIDIA. 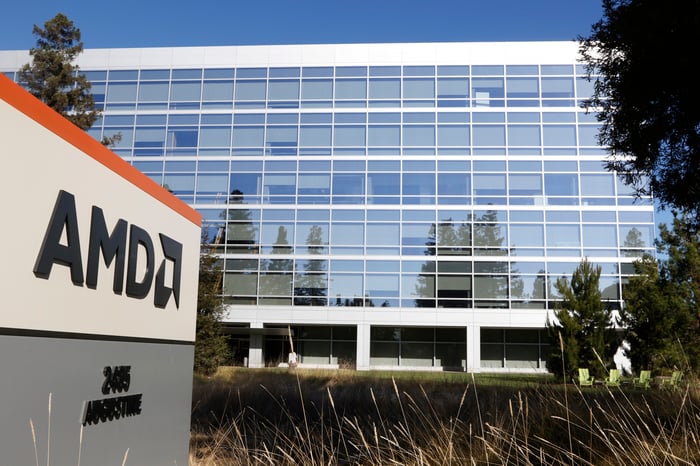 Those efforts led to the launch of AMD's Ryzen CPUs for PCs and Epyc CPUs for servers in 2017, which were both based on its new Zen microarchitecture. These CPUs addressed the poor single-threaded performance of AMD's previous Bulldozer CPUs. The company also introduced its new Vega GPUs that same year.

AMD's new CPUs offered comparable performance as Intel's CPUs for much lower prices. Meanwhile, Intel's internal foundry fumbled its transition from 14nm to 10nm chips in 2018, resulting in a CPU shortage which allowed AMD to gain significant market share in the PC and server markets. AMD, which outsourced the production of its chips to external foundries like Taiwan Semiconductor Manufacturing (TSM -2.06%), didn't face any production bottlenecks.

Intel also recently postponed the launch of its 7nm chips to 2022 and 2023. As a result, AMD, which launched its first 7nm chips last year through Taiwan Semiconductor, remains ahead of Intel in the "process race" to create smaller and more power-efficient chips. AMD also launched its first 7nm Radeon GPUs before NVIDIA, which only recently advanced from Taiwan Semiconductor's 12nm process to Samsung's 8nm process with its new 30 series GeForce GPUs.

My outlook for AMD

In 2018, AMD moved the production of its latest 7nm CPUs and GPUs to Taiwan Semiconductor and cut its longtime partner, GlobalFoundries, out of the loop. Therefore, AMD's ability to stay ahead of Intel and NVIDIA in the process race remains highly dependent on Taiwan Semiconductor, which will likely continue to produce smaller and denser chips than other foundries for the foreseeable future. 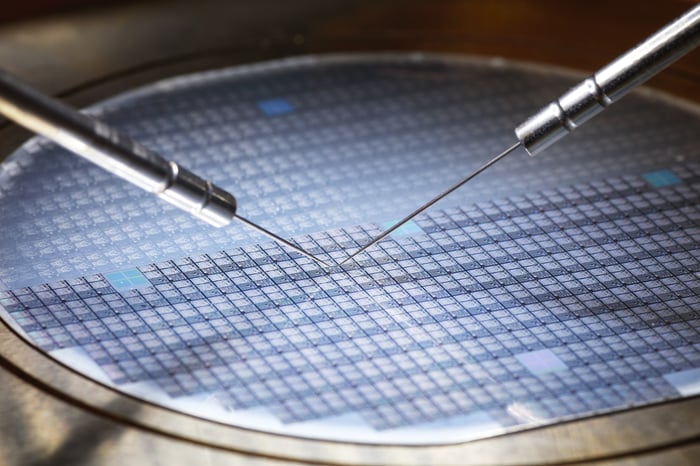 AMD plans to launch its new Zen 3 architecture, which will power its Ryzen 4000 series chips, on Oct. 8. Those new chips will be produced on Taiwan Semiconductor's improved 7nm+ process, which provides a 20% increase in transistor density from the 7nm process used by the Zen 2. But that upgrade won't definitively beat Intel, which is also launching denser 10nm+ and 10nm++ chips to chase Taiwan Semiconductor's upgraded 7nm node.

On the GPU front, AMD will launch its new RDNA 2 GPUs on Oct. 28. These new 7nm chips, which will power the new PS5 and Xbox Series X and S consoles, will compete against NVIDIA's incoming 30 series GPUs in the PC market. Robust sales of those new gaming consoles should strengthen AMD's EESC business throughout 2021, and complement the growth of its PC-based CPUs and GPUs in its core computing and graphics business.

AMD's revenue grew 33% year over year to $3.72 billion in the first half of fiscal 2020, which ended on June 27, while its adjusted earnings before interest, taxes, depreciation, and amortization (EBITDA) more than doubled to $609 million. For the full year, it expects its revenue to rise 32%, buoyed by the strength of the PC, gaming, and data-center markets. Analysts expect its earnings to surge 72%.

In fiscal 2021, analysts expect AMD's revenue and earnings to rise 21% and 51%, respectively, as its new CPUs and GPUs hold Intel and NVIDIA at bay. Those are impressive growth rates for a stock that trades at just 45 times forward earnings.

A lot can happen over the next few quarters, but three things keep me bullish on AMD: Lisa Su's leadership, Taiwan Semiconductor's lead in the process race, and Intel's inability to resolve its pressing foundry and R&D issues. Those tailwinds, along with AMD's reasonable valuation, indicate its stock could still have plenty of room to run in 2021.