A threat against one of its customers pushed shares of the chip stock lower.

Shares of ACM Research (ACMR -4.15%) plunged last month on reports that one of its key customers could be added to the Commerce Department's "Entity List," which would effectively ban it from importing technology from American companies. That news helped push the stock down 22%, according to data from S&P Global Market Intelligence.

As you can see from the chart below, all of those losses came at the beginning of the month as the Nasdaq sank into a correction and then the Entity List news broke. 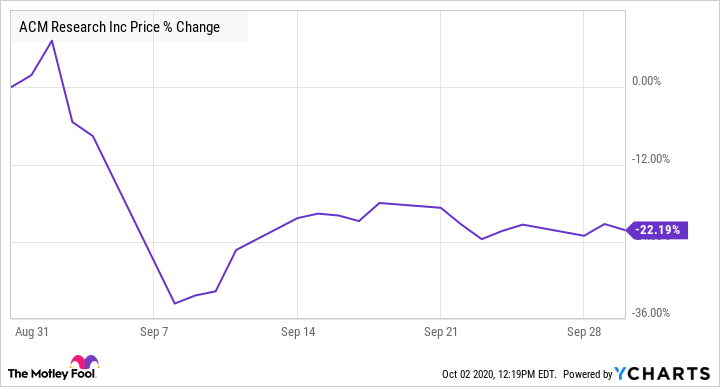 ACM shares fell 12% on Sept. 3, the same day the Nasdaq tumbled 5% as the rally in late August gave way to a sell-off, indicating investors believed the market was overvalued. The next week, ACM stock crashed 28% on news that the federal government was considering putting Semiconductor Manufacturing International Corp. on the Commerce Department's Entity List, which would give it the same restrictions it imposed on Huawei, making it difficult for SMIC to use any U.S. technology.

The news threatened the entire Chinese semiconductor industry as it would likely carry over to other companies. ACM is based in the U.S., but its core business operations are in China. The company provides wafer cleaning equipment to chipmakers like SMIC, though the company was not among top its three customers, which make up a majority of its business.

Accelerating ACM's sell-off was a downgrade from Needham to hold from buy as analyst Quinn Bolton said the company's business outlook could weaken due to "material exposure" to SMIC. He also noted that it would put pressure on its upcoming IPO on Shanghai's STAR Market.

Three days later the stock began to rebound after Stifel upgraded it, saying it had been oversold, which helped the stock recover some of those losses.

On Oct. 1, ACM gained approval for its STAR Market IPO, and management said it was on track to price the IPO by mid-May. It plans to use the proceeds to fund product development and expand and upgrade its process equipment. Despite the setback in September, ACM remains squarely focused on growth and penetrating the market for semiconductor cleaning equipment.