These tech companies will reveal important information about their long-term potential amid the coronavirus pandemic.

With October comes long-awaited third-quarter earnings. And after an eventful summer dominated by the coronavirus pandemic, those results will reveal how companies have fared during these challenging times and how their futures are affected.

In particular, investors should closely watch the tech stocks International Business Machines (IBM -0.16%), Microsoft (MSFT -0.31%), and Arista Networks (ANET -1.77%). Here's why these three stocks are ones to watch in October.

As usual, IBM will give an early indication of the recent tech sector's performance, as it is one of the first tech giants to report its third-quarter results. But more importantly, investors should look at the company's transition from its hardware on-premises businesses to cloud computing. 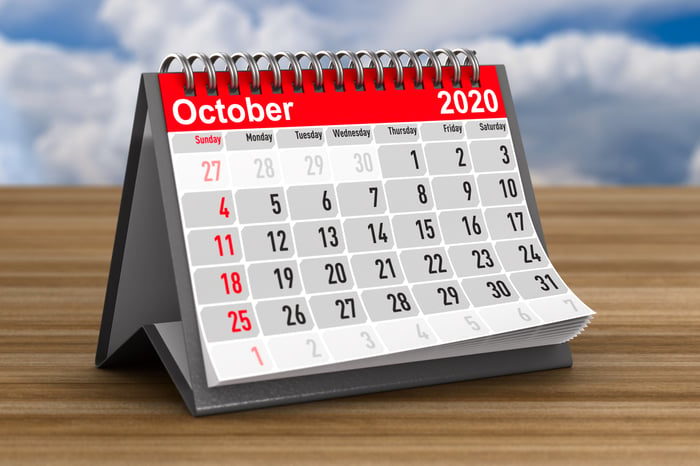 So far, that journey has been painful, as the company's cloud activities weren't significant enough to fully offset the decline of legacy businesses. And with the divestiture of some assets, revenue dropped from $105 billion in 2012 to $76 billion over the last 12 months.

But IBM recently accelerated its transition to the cloud. In 2019, it acquired the cloud specialist Red Hat for $34 billion, and Arvind Krishna was appointed as CEO in April to drive that shift.

Thanks to its scaling cloud offerings, IBM is getting closer to an inflection point that could lead to top-line growth. With $23 billion of trailing 12-month revenue, cloud corresponded to 30% of total revenue, up from 2% in 2012. And during the last quarter, cloud revenue growth accelerated to more than 30% year over year.

As is the case with IBM, investors should pay close attention to Microsoft's next-quarter earnings because of its cloud business.

The company's cloud infrastructure offering Azure has been growing at an impressive pace over the last several years, but it has been decelerating. During the last quarter, Azure revenue grew 47% year over year, down from 64% one year ago. As shelter-in-place orders have boosted the consumption of cloud computing, investors should make sure Azure will remain a strong revenue growth driver for Microsoft.

But with its stock trading at 31 times forward earnings, the company must also still deliver strong results with its other businesses to justify that demanding valuation.

In particular, Microsoft is launching new gaming products that will shape its performance in that segment over the next several years. In addition to its new cloud gaming service xCloud, on Nov. 10 Microsoft will release its next-generation consoles Xbox Series X and Xbox Series S, which have been available for pre-order since September. During the next earnings call, management may give an early indication of the demand for those new gaming products.

Microsoft hasn't communicated when it will release its quarterly results yet, but analysts estimate it should happen between Oct. 20 and Oct. 25.

3. Arista: From cloud networking to cybersecurity

Microsoft's results should be of interest to Arista's shareholders, too. The tech giant was Arista's largest customer in 2018 and 2019, with 27% and 23% of total revenue, respectively, as Microsoft has been building a part of its Azure networking infrastructure with Arista's hardware and software.

More generally, the cloud network vendor has been generating strong revenue growth by offering innovative solutions to cloud providers. Its revenue grew from $1.1 billion in 2016 to $2.3 billion over the last 12 months.

But recently, it had a few challenging quarters because of the volatile spending of some large customers. For instance, revenue dropped 11% to $541 million during Q2.

Despite the coronavirus-induced accelerated consumption of cloud-based services that should favor Arista's core business, management forecast revenue from cloud giants to remain flat this year. Thus, any downward revision of the full-year revenue outlook from those customers should have investors worried. It may indicate that the company's portfolio has become less attractive as competition is intensifying.

Analysts anticipate Arista will communicate its third-quarter results between Oct. 28 and Nov. 1.

Before that, management will hold an important webinar on Oct. 15 to discuss its cybersecurity strategy. Indeed, this week the company announced its first step into that large and growing market with its acquisition of Awake Security, which represents a significant long-term growth opportunity Arista can capture by leveraging synergies with its networking portfolio.

In any case, the stock is trading at a reasonable forward price-to-earnings (P/E) ratio of 21, which provides shareholders with some upside potential as the company remains relevant in its core cloud networking business while expanding its footprint into cybersecurity.