Please ensure Javascript is enabled for purposes of website accessibility
Log In Help Join The Motley Fool
Free Article Join Over 1 Million Premium Members And Get More In-Depth Stock Guidance and Research
By Adam Levy – Oct 3, 2020 at 9:15AM

Users got some new features, but the social media giant got a lot more.

Facebook (META -0.74%) is making it easier for users to message each other across its family of apps. CEO Mark Zuckerberg shared his plans to integrate the back end of all of Facebook's apps in January last year, and the company just took the first steps to merge Instagram direct messages with Messenger. 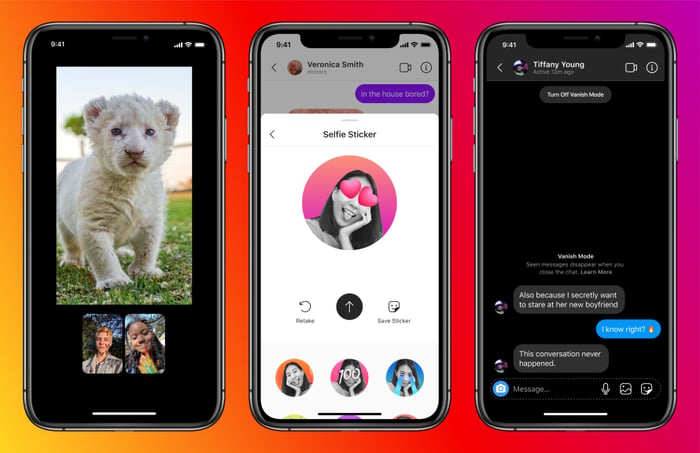 If the government concludes Facebook violated antitrust regulations in connection with its acquisition of Instagram or WhatsApp, it'll seek to force the divestment of those businesses. But if the apps are all integrated together into one back end, it won't be easy to break them apart. Facebook can argue there is no more Instagram or WhatsApp; it's all just Facebook with a different wrapper on it.

On top of the integrated messaging features it's rolling out, Facebook also introduced an Accounts Center feature that allows users to manage logins, content, and payment information across its family of apps. It's also testing ways for users to crosspost content like Stories more easily.

Of course, regulators may call out Facebook on this practice as an effort to impede the ability to break up the company. But proving that motive could be very difficult, especially considering there are some very legitimate business reasons to unify the back ends of its apps.

Good for users and good for business

Instagram users are getting a lot of new messaging features as Facebook rolls out the integrated service. They'll now have access to loads of Messenger features, including vanishing messages, selfie stickers, custom emoji, chat colors, blocking of unwanted messages, and Watch Together, which allows users to watch videos on Messenger simultaneously. Not to mention the ability to share content more easily with friends who aren't on Instagram.

Going forward, there won't be a disparity in features available on Instagram, Messenger, and WhatsApp, which is ultimately good for users. They won't have to choose between a network of users on one platform and the feature set of another platform. Furthermore, there's no need to track conversation threads across multiple apps.

While it will cost Facebook a lot to fully integrate the back ends of all three messaging platforms, it can save the company money in the long run. It only has to manage one codebase and it doesn't have to repeat efforts to build new features across all of its apps.

Taking on another potential monopoly

Facebook's big push to improve and integrate its messaging services coincides with its efforts to get Apple (AAPL -1.96%) to loosen its restrictions on default apps on the iPhone. Apple previously locked default apps to its own software, but the latest version of iOS will open the door for competitors in web browsers and email applications. But if you want to message a friend, Apple wants you to use iMessage. Facebook wants to change that.

iMessage has been attributed with keeping some users in the Apple ecosystem. Apple continues to increase the utility of iMessage, adding features like payments and deeper integrations with iOS apps. These features are a direct threat to Facebook, which is looking to use messaging and payments as a way for businesses to interact on a more personal level over the internet.

Improving the ability to communicate with users across its family of apps could increase engagement in Facebook's messaging services. But it's unlikely to put pressure on Apple to make further concessions on default apps for iOS.

While Instagram users are getting some nice new messaging features, Facebook's making much bigger moves behind the scenes. The potential for investors is big, as it can streamline operations, improve the user experience, increase engagement, and potentially block a breakup.