Select tech hardware stocks are showing strength in spite of effects from the pandemic.

Software and cloud computing services have been all the rage this year as organizations have shifted to remote digital-based operations because of COVID-19. Tech hardware has been much more of a mixed bag. Some companies reliant on smartphone and auto sales haven't fared so well, while others that supply parts for networking and data centers have been off to the races.

Headed into the final quarter of 2020, some of this year's biggest winners are showing signs of continuing their run, while other not-so-fortunate companies are predicting a rebound in 2021. Three Fool.com contributors think Micron Technology (MU 0.66%), Nokia (NOK -1.32%), and Lam Research (LRCX -1.37%) are timely tech hardware buys for October.

Nicholas Rossolillo (Micron Technology): For semiconductor investor veterans, it's well-known that chip manufacturing is a highly cyclical industry. Memory chips in particular are prone to wild swings, with sky-high profits one year susceptible to deteriorating into losses in the next. This is the wild world in which Micron has historically dwelled.

The latest slump started to manifest itself in the second half of 2018. Chip supply started to catch up with customer demand, sending prices (and thus profits) lower. Compounding the normal cycle was the U.S.-China trade war; Micron has at times lost a big customer in Chinese telecom giant Huawei after the U.S. imposed sales restrictions on the company (with the latest ban having just gone into effect on Sept. 14). 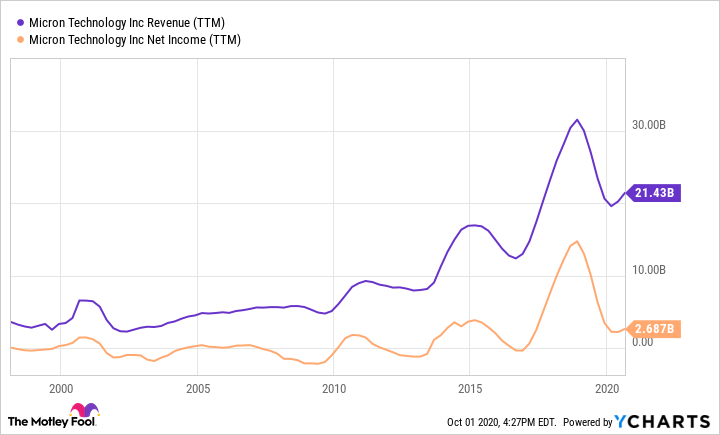 Nevertheless, digital data storage is a secular growth trend, and Micron's highs and lows have both averaged higher over the years. And unlike many times in the past, the company was able to stay in the black during this latest downturn. Consolidation in the memory chip industry is part of the story, but Micron (now under the guidance of CEO Sanjay Mehrotra) has also been more disciplined by walking away from low-profit margin deals. Memory demand has also remained strong as high-end computing needs from the cloud and 5G network industries have created a floor for Micron's sales -- at least for the time being.

And the company's fiscal 2020 fourth quarter went a long way toward underlining this point. Now back in an uptrend, Micron's revenue and adjusted net income increased 24% and 93%, respectively, to $6.06 billion and $1.23 billion. And as of the end of August, the chipmaker had $9.19 billion in cash and investments and $6.64 billion in debt on the books -- arguably the best shape it's ever been in exiting a cyclical slump. Shares trade for 17 times adjusted earnings (or 20 times earnings on an unadjusted basis), a value as Micron returns to growth mode.

Don't count this industry veteran out of the 5G race

Anders Bylund (Nokia): The Finnish maker of telecom-grade networking equipment is a no-brainer buy right now. Nokia is knee-deep in equipment orders and installations for 5G wireless systems, which will provide fuel for the company's growth over the next several years. Recent 5G wins include large-scale installations in Britain and Spain, making Nokia the 5G equipment provider for two of the largest markets in Europe. In the U.S., Dish Network (DISH -2.11%) selected Nokia's cloud-based software to manage its 4G and 5G wireless networks. I'm just scratching the surface of Nokia's active growth drivers here.

The company suffered one significant setback last month when Verizon (VZ -0.86%) elected to run with Samsung (OTC: SSNLF) equipment for its 5G systems. Nokia's stock crashed on the news and is now trading 21% lower over the last four weeks. I think that's an overreaction. Verizon is a big account, but one win doesn't make a dominant 5G player out of Samsung. It's a big world out there with plenty of room for several successful 5G equipment vendors, including a large slice for industry veteran Nokia.

Today, Nokia shares trade at just 12.5 times free cash flow and 12 times forward earnings. The stock is on fire sale because of a knee-jerk market reaction to Samsung's Verizon win. Long story short, this is a great time to pick up Nokia shares on the cheap.

Billy Duberstein (Lam Research): What if I were to tell you about a large technology company that was growing revenue 18.2%, highly profitable, guided to a strong September quarter, trades at just 16 times forward earnings, is buying back stock, and just raised its divided? That's what you currently get with Lam Research, one of the few large semiconductor equipment manufacturers in the world.

Lam's financial strength lies in the fact that it sells the "picks and shovels" required to make advanced memory and semiconductors, the sought after "gold" of the big data age. But while numerous companies are competing to make the fastest and most powerful chip across 5G, AI, IoT, and other 2020s applications, only a handful of companies make the machines that produce these chips. That means high demand for Lam's machines over the long term. What's even better is that Lam gets about one-third of its revenue from recurring services tied to the installed base, which grows every year, evening out the volatility of machine sales.

So why is Lam so cheap compared with the rest of the tech sector, and why did it fall in September? Chalk it up to being a victim of its own success. Since its machines are so critical for producing advanced semiconductors, the U.S. is actually considering prohibiting their sale to Chinese chipmakers like Huawei, Semiconductor Manufacturing International Corp. (SMIC.Y), and potentially others. China as a whole accounted for about one-third of Lam's sales last quarter, so that would definitely affect things in the near term.

However, it's end demand for semiconductors that will drive Lam's long-term results; if they aren't made in China, those chips will eventually be made in the U.S., Taiwan, or South Korea, and those manufacturers are also Lam customers. That's why long-term investors should scoop up shares of this high-quality dividend stock after the recent dip.