One of these multistate operators is in a stronger financial position to gain from a swiftly expanding U.S. cannabis market.

If you're a growth investor, the U.S. cannabis industry is one area you'll want some exposure to. The U.S. pot market is going to grow at a rate of 18% per year (on average) and reach a value of $34.5 billion by 2025, according to cannabis research company BDSA. That's more than five times the Canadian market's projected value, which by 2025 will be worth approximately $6.1 billion. International sales are only set to climb to $6.5 billion five years from now.

Two companies that could stand to benefit from massive U.S. market growth are Trulieve Cannabis (TCNNF -2.56%) and Harvest Health & Recreation (HRVSF). Trulieve recently announced its expansion into a fifth U.S. state with the acquisition of two Pennsylvania-based companies, while Harvest owns and operates over 30 retail locations across seven states. Let's take a closer look at where these two cannabis companies are going (and where they've been) in order to determine which one is the better buy for cannabis investors today.

Can Trulieve's domination continue outside of Florida?

Although its presence technically spans five states, Trulieve has achieved most of its success by focusing on its home market of Florida. On Sept. 22, the company announced the opening of its 61st dispensary and its 59th in Florida. With only two dispensary locations outside of the state, the company faces a big test with further expansion. 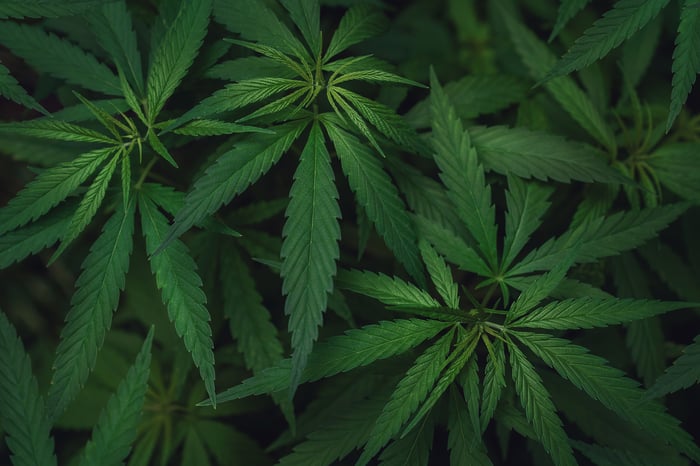 Trulieve's recorded a profit in each of the past five quarters, and a big reason for that stability is its simplified business model. Many cannabis companies struggle to stay out of the red amid rapid growth. They often deploy strategies that include expansion into many different regions out of a desire to grow their presence and overall market share.

Moving into more states will certainly boost Trulieve's top line. On Aug. 12, the company released its second-quarter results up until the end of June. Its sales of $120.8 million grew 26% from the previous period and were more than double revenue from the prior-year period. Trulieve's still poised for more growth in Florida as it opens more locations -- especially now that edibles are permitted in the state. The company is coming out with new products to serve this segment of the market.

However, it's clear that Trulieve has its sights set beyond just Florida, and the question for investors is whether it can succeed where other cannabis producers have failed. Since cannabis is illegal at the federal level, marijuana products can't cross state lines. It creates a logistical challenge that makes expansion not only challenging, but costly, since each state operation is effectively its own bubble. Trulieve has demonstrated that it can do well in one state, but whether it'll still be able to produce profits while active in five or more states is one of the questions investors should be asking.

Harvest Health is a much cheaper buy, but is it too risky?

Arizona-based Harvest Health & Recreation evokes some of the worries that Trulieve investors are starting to experience as it expands. Harvest Health recently opened its 15th location in its home state, but it has a much wider geographic spread, with more than 20 locations outside of Arizona.

Unfortunately, that hasn't made Harvest Health any safer of a buy. Its second-quarter results came out on Aug. 11; the company's sales of $55.7 million showed growth similar to Trulieve's, rising 26% from the previous quarter and 109% year over year. But a key difference was its net loss of $18.3 million, which was one-third of its top line. Although it's an improvement from the $25.5 million loss Harvest Health incurred a year ago, the company has consistently reported a loss in each of the past five quarters.

The good news is that there is plenty of room for sales growth, especially if Arizona voters legalize marijuana later this year. Although that growth potential may be appealing, investors are proving more keenly focused on profitability and overall financial health rather than strong sales numbers alone. That's a big part of the reason why investors are willing to pay a significant premium for Trulieve compared to Harvest Health, which trades at a relatively low price-to-sales ratio of 1.8: 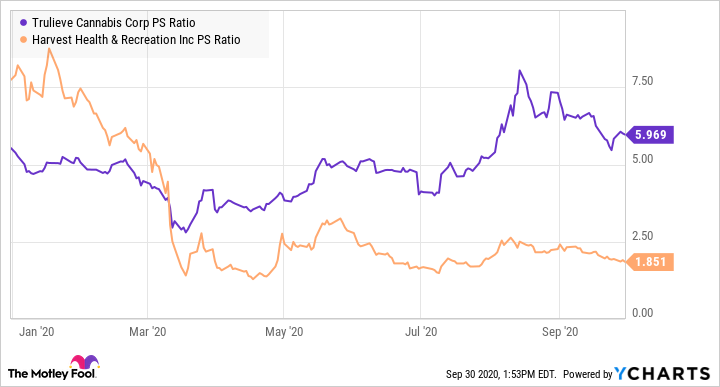 Being a cheap stock means little if Harvest Health can't produce better financial results, including a much stronger bottom line.

Trulieve is the stock to go with today

Although it's trading at a higher premium, Trulieve is a justified buy given its stellar performance. While expansion may erode some of its overall profitability, it's still in good shape to deliver strong results for investors while tapping into more state markets.

Year to date, the stock's been soundly outperforming not just Harvest Health, but the Horizons Marijuana Life Sciences ETF (HMLSF -0.03%) and the S&P 500: 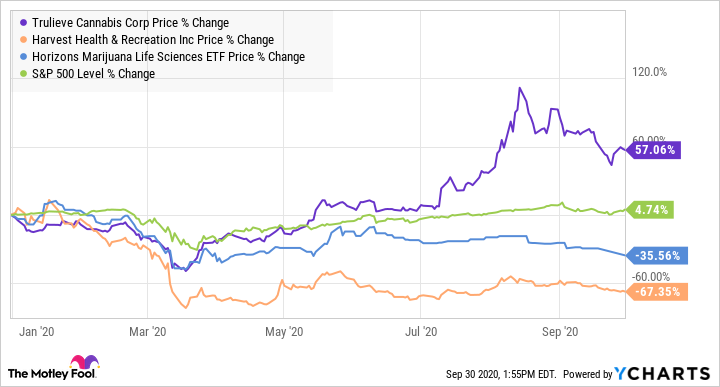 Trulieve is establishing itself as one of the top pot stocks in the U.S. market, and getting in on the action of the Florida-based business is a great way for investors to benefit from the overall industry's long-term growth.

Can Trulieve Recover From the Harvest Deal?
370%