With an increasing share of the coronavirus diagnostic testing market, Abbott is positioned for substantial growth.

With a market cap of more than $189 billion, Abbott Laboratories (ABT 2.46%) is one of the largest healthcare companies in the world. Thanks to its ever-growing cornucopia of consumer health goods, medicines, and diagnostic tests, Abbott has carved out profitable niches in many different markets since its founding in 1888. In the context of our present pandemic, however, Abbott's claim to fame has been its coronavirus products. So far this year, Abbott has released six different COVID-19 tests, four of which are intended for diagnosing active infections and two of which detect antibodies that are indicative of past infection.

In total, high levels of demand for these new tests drove Abbott's sales revenue from diagnostics to grow by 7% in the second quarter alone. Nonetheless, the company's quarterly year-over-year revenue growth remains at negative 8.2%. Is Abbott's brand-new coronavirus testing segment large enough to carry it to new heights, or is it spending a lot of money on research and development without any obvious long-term returns in the works? In my view, Abbott has a bright future of growth from its investment in coronavirus tests, but that's just one element of its return to steady revenue increases.

Abbott's innovations in coronavirus testing led the company's molecular diagnostics segment to grow by a wild 241% in the second quarter, powered by sales of 40 million coronavirus tests worldwide. In total, the company's diagnostics sales were $2 billion in the second quarter, making it Abbott's second-largest segment. While Abbott probably can't sustain this kind of revenue growth in the long term, it's already taking action to capture more of the coronavirus testing market by offering discounts and developing new testing products.

In this vein, the company announced in late August that the U.S. Food and Drug Administration (FDA) had granted its new BinaxNOW rapid coronavirus diagnostic test an emergency use authorization, thereby clearing it for sale. With a price tag of $5, a processing time requirement of merely 15 minutes, and an integrated smartphone application for tracking and validating test results, the BinaxNOW is a significant improvement over Abbott's prior COVID-19 tests, not to mention the offerings of its competitors.

But there's one more thing about Abbott's coronavirus diagnostics work that investors will be pleased to hear: The company is on track to spend less on research and development this year in comparison to 2019. In the second quarter of this year, Abbott spent $564 million, whereas in that period in 2019 it spent $577 million. The divergence is even larger for the first quarter -- it shelled out $672 million in 2019 compared with just $578 million this year. In other words, Abbott didn't need to increase the overall size of its research budget to create half a dozen totally new products while continuing with all of its prior projects at the same pace as before the pandemic. The company has no need to stretch its dollars, but it appears to have done so to a fantastic degree anyway. 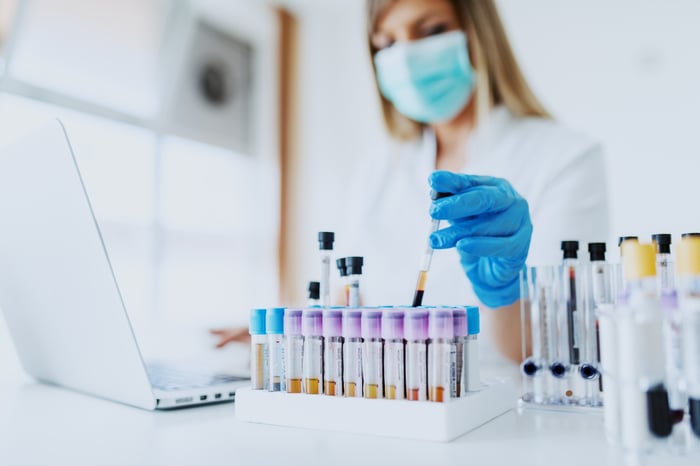 Tests are only a fraction of Abbott's innovation machine

There's a lot more to excite investors about Abbott Laboratories beyond coronavirus testing. In particular, the company's freshly launched FreeStyle Libre 2 integrated glucose monitoring sensor saw sales explode by 40% from April to August alone. This device is only in the early stages of market penetration, so there's reason to believe revenue growth will remain rapid.

As revenue grows, the company will also look to cross-market the device to new demographics, much like it recently did with its glucose monitor for athletes. Investors can also expect Abbott's new implantable defibrillator device to start driving new revenue, as it was just approved for use by the FDA. Medical devices including these two products make up Abbott's largest segment, with inflows of $2.4 billion in Q2.

There are quite a few different drivers for revenue growth at Abbott, and astute investors will recognize that this would still be true even if the pandemic had never happened. Furthermore, while it's true that its sales revenues have been contracting recently, the company is still profitable, flush with cash, and it pays a dividend that has increased each year without fail for decades on end. For me, it's hard to identify a better big pharma stock than Abbott, so it's an easy call to say that it's worth a buy.