There were a few broad trends moving renewable energy stocks higher today, which is why we see such broad strength in the industry. The first is that Joe Biden continues to gain in polls of the presidential election. If he wins, the consensus is that it will be good for renewable energy deployment in the U.S. In a note to investors today about its new overweight rating on SunPower, Piper Sandler analysts said a Biden presidency would likely mean an extension of the 30% investment tax credit. That credit is already stepping down from 30% a year ago to 10% in 2022 for commercial and utility-scale projects and 0% for homeowners. An extension of the credit would be good for Enphase, JinkoSolar, and First Solar, and it could even help FuelCell Energy because it benefits from the same tax credit. 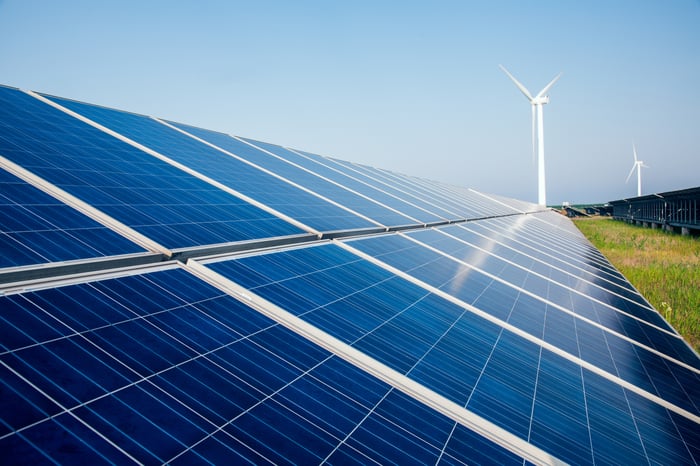 On a more tangible note, the Solar Energy Industries Association released its Solar Means Business Report today. It showed 1,286 megawatts (MW) of solar installed by commercial companies in 2019, the second-best year of all time. On-site solar installations (845 MW) had their best year yet, showing that more and more companies are seeing the economic benefit of installing solar on roofs.

Finally, FuelCell Energy is seeing a bounce in part after yesterday's rebuttal of a short-seller's report. The company said that two project awards that had come under question were not part of the stated backlog or financial goals for 2022. This gave investors some peace of mind after the short-seller's report earlier this week.

What we're seeing this week is really a sentiment change in the renewable energy industry overall, and that's why most of the big companies are moving higher today. While the direct news about FuelCell and the corporate solar report are good, they're not enough to make much of an impact by themselves.

I think we're really seeing investors bet big that a Biden administration will move to extend and potentially even extend tax benefits that are currently declining. That could be a financial boon for manufacturers like Enphase, JinkoSolar, and First Solar, while helping the development arms of FuelCell and First Solar. At least for today, speculation about future subsidies is ruling the day and has renewable energy stocks moving higher across the board.