The weather may have cooled down last month, but enthusiasm for this EV-oriented stock heated back up.

Rebounding most of the way back from their 36% slide in August, shares of Blink Charging (BLNK 1.15%) jumped 47% in September, according to data from S&P Global Market Intelligence. News of an acquisition, operational successes over the summer, and an expanding presence in New York all helped to rid investors of the sour taste that was left in their mouths from a pair of critical reports that were released over the summer.

While the stock languished through the first half of the month, it popped on Sept. 18, when Blink announced that it had acquired BlueLA Carsharing, the contractor for the city of Los Angeles' electric vehicle (EV) carsharing program. With that deal, Blink also picked up 200 EV charging stations and 100 EVs. Speaking to the merits of the transaction, CEO Michael Farkasstated: "Through this acquisition, we believe Los Angeles can serve as a prototype for an EV carsharing and charging infrastructure program that can be replicated in other cities across the country. Our goal is to make EVs accessible by leveraging our network and expertise." 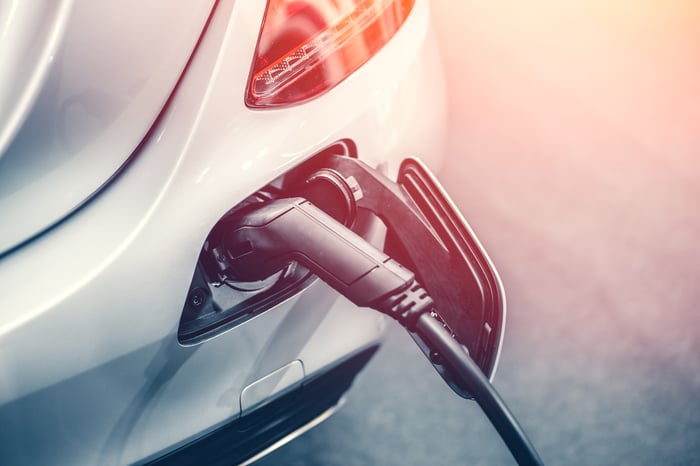 Investors didn't have to wait long to receive more positive news from the company. Four days later, on Sept. 22, Blink announced it had achieved strong sales growth over the summer, despite the challenges wrought by the COVID-19 pandemic. The company "sold or deployed 539 EV charging stations in the United States and internationally during the summer COVID-19 lockdowns of June, July, and August 2020," it said, representing a near-doubling of what it had accomplished during the same period in 2019.

The final week of the month provided one more reason for shareholders to smile. On Sept. 25, Blink announced a partnership it had formed with Sustainable Westchester to expand EV charging infrastructure in Westchester County, just north of New York City. According to the agreement, Blink will provide 50 charging stations at no cost to hosts in the area. While it isn't as if this, in and of itself, will move the needle in terms of the company's financials, bulls clearly interpreted the deal as a sign that Blink is gaining traction in the EV charging market. Moreover, should the partnership prove successful, it may lead to more lucrative opportunities in the state, which aspires to source 70% of its electricity from renewable power sources by 2030.

Though there was a lot for investors to celebrate last month, those who find Blink Charging prospects intriguing would be well-served to examine its upcoming Q3 and Q4 earnings reports closely to see if there are material changes to its financials. From 2016 through 2019, its annual revenues remained fairly flat, and the company continues to burn cash. Investors who find the renewable energy sector compelling, consequently, may want to look elsewhere.