Dollar store shoppers need tax breaks most -- but the biggest windfalls will go to the wealthy.

So, America -- how are you enjoying your payroll tax cut?

In a memorandum dated August 8, 2020, President Donald Trump directed Treasury Secretary Steven Mnuchin to "defer certain payroll tax obligations with respect to the American workers most in need." Specifically, collection of payroll taxes on any employee earning "generally ... less than $4,000" every two weeks are to be suspended during the period from September 1, 2020, through December 31, 2020.

Thus, if your salary is under $104,000 per year, you should not currently be seeing contributions for Social Security and for Medicare -- totaling 7.65% of your wages -- deducted from your paycheck. (I say "should" because, according to news reports, not all private employers are complying with the directive -- and in fact they are not required to do so.) 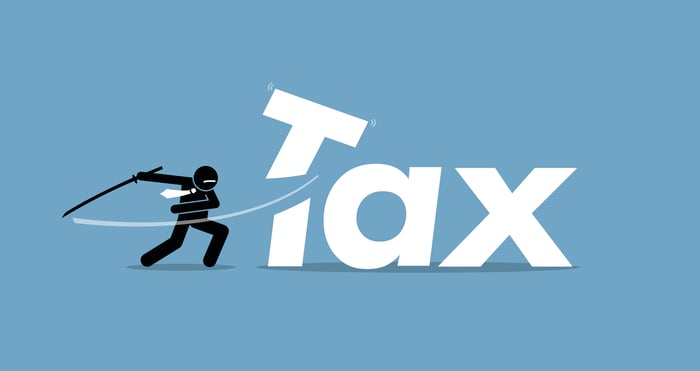 One big tax cut is already here, and more may be on the way. Image source: Getty Images.

Problems with legislating by memo

Now, there are a few problems with this directive. For one thing, it doesn't help everyone. If you make too much money (say, $104,001 a year) or if you don't "generally" collect an actual paycheck -- if you're a freelancer or contractor, unemployed, or retired -- the president's memo doesn't affect you at all.

What's more, even if you do benefit from the deferrals, your respite may only be temporary. You see, despite the name, President Trump's payroll tax cut isn't actually a "cut" at all. Rather, the executive order only defers collection of these payroll taxes. The taxes are still owed to the government, though, and may be collected after the Dec. 31 deadline expires -- increasing your payroll taxes in 2021 as a result.

It would take a literal act of Congress to eliminate this tax debt, and so far, that hasn't happened.

Benefits of the payroll tax cut

Still, in the meantime, passing this payroll tax deferral is seen as a way to temporarily lighten the load on lower-income households and put more cash in more hands, faster, to stimulate the economy.

55 bucks a week. That's not enough to pay for a Caribbean vacation, nor even finance a new car -- especially if the extra money vanishes in a couple months. $55, is, however, about what the average American spends on groceries every week. Seen in that context, it starts to become clear which types of consumers -- and companies -- might benefit immediately from a payroll tax cut.

Simply put, a lot of this "extra" money will go to paying grocery bills, and will be spent by folks who could really use the help. Discount grocers such as Aldi and Lidl for example -- or among grocery stocks, companies like Dollar General (DG -0.20%) -- will probably be among the first companies to benefit from this payroll tax "cut." Furthermore, come next year when the payroll tax is no longer deferred -- indeed, when it might need to start being paid back -- demand for such discount grocers is only going to grow, pushing more and more customers through the doors of Dollar General.

Other taxpayers -- and other companies -- could also win big from the payroll tax deferral, and benefit even more if, after the 2020 elections, Congress decides to expand the deferral or turn it into a true tax cut.

Consider: Currently, the payroll tax cut only defers Social Security and Medicare taxes on $104,000 in annual income. But payroll taxes usually get levied on the first $137,700 of an employee's wages. (Furthermore, for employees earning over $200,000, there's an additional 0.9% Medicare tax on wages over that threshold.) Thus, the higher an employee's wages, the more money workers get to keep if those taxes are suspended or cut.

In a recent report, the Institute on Taxation and Economic Policy concluded that in its present form, 64% of the benefit of President Trump's payroll tax deferral is already going to the top 20% of earners. This top-loading of benefits would skew even more heavily toward high earners if all payroll taxes were deferred, or made permanent, or both. Indeed, according to CNBC, a complete elimination of payroll taxes could save earners in the $118,700-to-$263,000 income bracket an average of $3,750 per year.

In such a scenario, investors might find that ritzier stock picks -- luxury jeweler Tiffany (TIF) comes to mind, or electric carmaker Tesla (TSLA -1.44%) -- might benefit even more from an uptick in spending. Indeed, "thanks" to the coronavirus, would-be Tesla buyers mourning the end of government electric car tax breaks last year may get one last chance to benefit from Uncle Sam's generosity.