Please ensure Javascript is enabled for purposes of website accessibility
Log In Help Join The Motley Fool
Free Article Join Over 1 Million Premium Members And Get More In-Depth Stock Guidance and Research
By Alex Carchidi – Oct 11, 2020 at 1:29AM

These payouts are big -- and getting bigger over time.

If you're an investor who likes high-yield dividend stocks, you probably already know that not all that glitters is gold. Companies sometimes distribute unusually high dividends to make their stock more appealing in the aftermath of a price collapse or a slew of bad news. Some dividend yields get an artificial boost after a company's stock's price craters but management makes the intentional choice not to cut the dividend. On the other hand, many companies offering high dividends do so as an intentional signal of their ongoing financial strength. Discriminating between these cases is thus critical for investors seeking yield.

When you're sorting through stocks with dividend yields above 5%, you'll need to tread carefully and pick companies with consistently high yields that have been growing sustainably over time, rather than those that only recently increased their payout to levels that they can't possibly maintain. It might also be worth considering stocks that have recently taken a beating without reducing their dividends, so as to purchase them at a bargain.

There are some solid companies whose dividend yields are routinely in excess of 5% that are worth looking at today. Here are three you may have heard of. 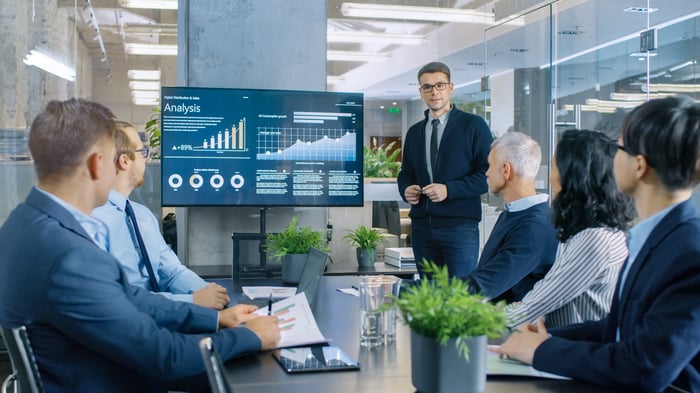 Gaming and Leisure Properties (GLPI 1.18%) is a casino holdings company with an impressively high trailing dividend yield of 7.14%. While that yield may fall over the next year, its dividend today is 10% higher than it was five years ago -- even after a cut to the payment in the second quarter. This suggests that GLP's management has consistently made returning money to shareholders a high priority.

Though the company is mature and no longer growing rapidly, it's remarkably well run, with a trailing profit margin of 37% and year-over-year quarterly earnings growth of 21% as of the second quarter. However, the pandemic has hit the gambling and leisure industry exceptionally hard by preventing patrons from visiting casinos and hotels, so don't be surprised if you see Gaming and Leisure Properties curbing its dividend even further in the next few quarters.

Nonetheless, the company's earnings in the first and second quarters of 2020 were greater than its earnings in the third quarter of 2019, suggesting that the pandemic may not have taken as bad a toll as expected. As lockdowns are lifted and revenue returns to normal, the company's dividend will likely grow once again, provided it can get its $6 billion of debt under control in the long-term.

As one of the world's largest mining and refining companies, Rio Tinto (RIO 4.08%) has a reputation for paying out sizable dividends. And while its yield has fallen from a high of nearly 10% earlier this year to a bit more than 5% now, its stock price has gained more than 78% in the past five years, beating the overall market's growth of nearly 70%. As a result, the company is a great choice for investors who want a combination of equity growth and dividend payouts. In terms of the dividend itself, Rio's payments have grown by 117% in the past five years, though they sharply contracted in early 2019 as demand ebbed.

There are a few concerns that investors should be aware of, however. First, Rio Tinto is a cyclical business whose earnings are reliant on high demand for mineral-based commodities. The current economic contraction may reduce this demand, leaving the company with shrinking earnings until the recovery is proceeding with gusto. Rio Tinto has survived previous downturns by curbing its dividend payments, so it's reasonable to suspect that it will bounce back, income investors should know the payout could shrink.

Another issue is the company's payout ratio, which is at 87% and rising. The payout could shrink sooner than expected if that ratio starts to look unsustainable in light of temporary economic conditions. That said, even with the economic disruption of the pandemic, Rio Tinto isn't going anywhere thanks to its $9 billion in cash and trailing revenue of $42 billion against operating expenses of only $11 billion. 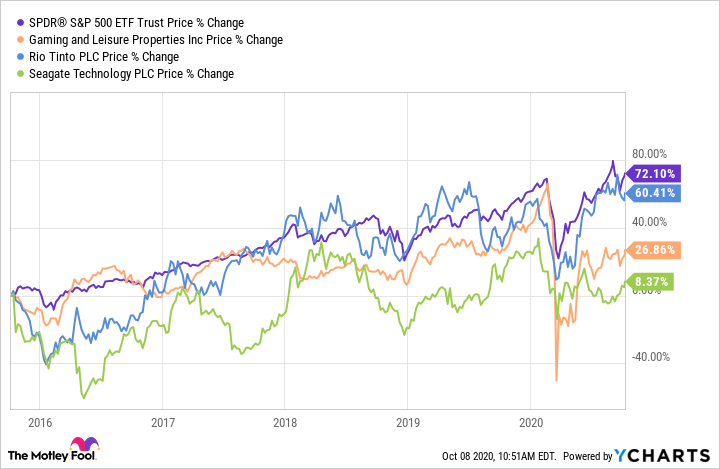 Digital storage manufacturer Seagate Technology (STX) may appear to be an unlikely contender on a list of the top dividend stocks. Its research and development costs are significant, and because its stock price has only grown by 11% since late 2015, cautious investors may not think it's competitively positioned to beat the market. That may be partly true, but it shouldn't totally dissuade investors. Seagate's dividend yield of about 5% is higher than it was five years ago, and its revenue grew last quarter at a year-over-year rate of 6.2%.

There's plenty of life left in this company, but Seagate still has work to do. Its total revenue has fallen from a peak of $15 billion in 2012 to $10.5 billion over the past 12 months. This means that while its dividend yield has grown impressively, the amount of each dividend payment has barely increased since 2015, rising from $0.54 per share to $0.65 per share. On the other hand, its operating expenses have also dropped from a high of $2.3 billion in 2015 to $1.5 billion in 2019 as part of an intentional strategy to shift the company toward lower volume and higher efficiency. As part of this strategy, Seagate has shifted its emphasis to providing high-capacity hard drive products for enterprise clients with cloud computing businesses rather than for the consumer market. This appears to be working so far, as in fiscal year 2020 the company grew its high-capacity storage revenues by 25%.

If Seagate's ongoing evolution toward a stable business model takes longer than expected, the company may need to lower its dividend or reduce its stock buybacks. For the time being, Seagate's dividend appears to be sustainable based on the scale of its dividends paid compared to its free cash flow, which totaled $673 million and $1.13 billion, respectively, over the past 12 months. If the company is successful in reducing its costs and increasing its revenue, shareholders may soon enjoy rising dividends once again.