It might be the most difficult truth to accept, but once you do, it can change everything.

In the fall of 1992, you might think champion diver Mark Lenzi was on top of the world. He returned from the Barcelona Summer Olympics with a gold medal in diving -- his singular life goal. But that wasn't the case. He plunged into a deep depression, quit diving, and was left wondering why his insides felt so terrible after accomplishing his ultimate goal.

Do a little digging and you'll see this is quite common. Something similar happened to Michael Phelps after the 2012 Olympics. But you don't need to be an Olympic athlete to fall victim. In essence, whenever we cede our intrinsic motivations to extrinsic factors, we open ourselves up to such swings -- and especially to burnout.

There's an important lesson in here for beginning stock investors: Keep your intrinsic "why" at the forefront. It's a simple lesson that can be very hard to practice in today's digital world. But the results are paradoxical -- the less you obsess about your nest egg balance, the likelier you are to see it grow. 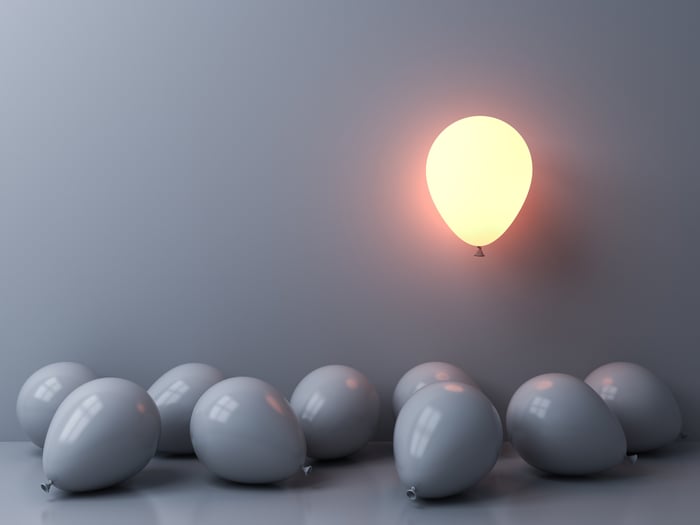 A lesson from the classroom

I was a middle school teacher before joining the Motley Fool. There's one study from my training that has stuck with me to this day. It dealt with intrinsic versus extrinsic motivation.

In the 1970s, researchers at Stanford and the University of Michigan did a simple experiment. They observed three- and four-year-olds for an hour in their pre-school class. They noted how much time was spent coloring with markers (among other things) to establish a baseline. Then, the kids were separated into three groups.

Introducing the plaque made the kids forget why they enjoyed coloring in the first place. The same thing happened to Lenzi, who said to the Washington Post in 1996: "I had kind of forgotten why I loved the sport so much."

Keeping your motivations intrinsic might seem like a stretch when it comes to investing. We all want to see our stocks go up so we have more money -- that's about as extrinsic as it gets.

But that's not the only way to approach it. We need to remember: Money simply isn't baked into our genes as a prerequisite for contentment. Making sure our basic needs are met? Absolutely -- but the correlation pretty much stops there.

Case in point: Martin Seligman of the University of Pennsylvania once asked different groups of people how satisfied they were with their lives. Three groups scored just as high as the Forbes richest Americans:

Of course, you probably don't belong to one of those groups, but you don't have to. You simply need to connect your reasons for investing to your real life. It's not about the number in your account, per se, but how it translates into your everyday experience.

The reasons can be varied, and I hesitate to even list any. I think anything that is intrinsically satisfying will do ... as odd as it may sound to someone else. There are well-worn answers like having a comfortable retirement or paying for a child's college education.

But there's no need to stop there. One of my greatest investing satisfactions comes from seeing how my ideas play out over time and learning lessons when they don't. Most importantly, I can apply these lessons to more important areas of my life.

Come up with a holistic mission statement for your life, and explore if investing can add to that mission.

The dark side of extrinsic motivation -- and its antidote

Perhaps no drawback of being extrinsically motivated is more stark than burnout and the depression that follows. When we are motivated by external rewards, we will go to great lengths to satisfy those desires. Instead of being rejuvenated by whatever we are doing (coloring with markers, diving, or investing), it simply becomes a nuisance we have to deal with.

That process -- of repeatedly participating in something that brings us no joy -- has serious long-term effects. It wears us down and causes us to lose sight of balance within our lives, until -- eventually -- our mind and body call it quits.

Specific to investing, we can also shoot ourselves in the foot. If we are purely extrinsically motivated, we are probably more likely to:

If we need an investing exemplar, look no further than Berkshire Hathaway's Warren Buffett. Here's how Shane Parrish of Farnam Street puts it:

What Buffett and a lot of other people who have been successful in life -- true success, not money -- have in common is that they're able to remember what we all set out to do: live a fulfilling life! Not get rich. Not get famous. Not even get admiration, necessarily. But to live a satisfying existence and help others around them do the same.

Focusing on intrinsic rewards, which is the only thing we can control anyway, represents a win-win that we should work every day to achieve -- in investing and in life.