Please ensure Javascript is enabled for purposes of website accessibility
Log In Help Join The Motley Fool
Free Article Join Over 1 Million Premium Members And Get More In-Depth Stock Guidance and Research
By Alex Carchidi – Oct 11, 2020 at 9:32AM

These two companies are both banking on the success of their coronavirus products.

Gilead Sciences (GILD 0.98%) and Abbott Laboratories (ABT 0.89%) are two of the largest and most formidable pharmaceutical companies in the world, and they're both on the front lines of the industry's response to the pandemic. Whereas Gilead's most recent claim to fame is its antiviral drug remdesivir, which may be effective against the coronavirus, Abbott's approach is to produce assays that can diagnose active infections and confirm past exposure. As with many other coronavirus stocks, both companies are being purchased by speculators based on perceptions of how useful their products will be in the ongoing fight against COVID-19.

In my opinion, the most important feature of a coronavirus stock is its prospect of capturing increasing revenue with its products over the duration of the pandemic. To accomplish this, a company would first need to develop effective therapeutic drugs, vaccines, or diagnostic tests. Then it would need to get its products approved for sale relatively quickly, as the competition is sure to be close behind. Finally, the company would need to manufacture and sell the product worldwide. As it turns out, both Gilead and Abbott plausibly meet the criteria I've outlined, but one of them is positioned to expand its revenue far more effectively than the other. 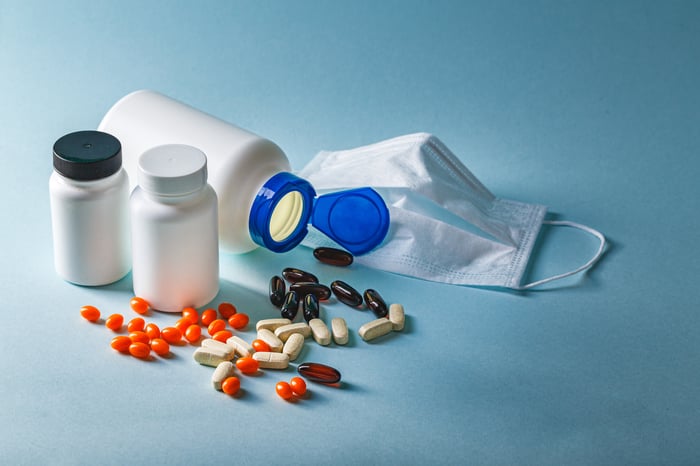 Gilead's remdesivir won't be enough to propel it to victory

As the manufacturer of the first drug to have regulatory authorization to treat all hospitalized patients with COVID-19, Gilead may seem like it's in an enviable spot. Early in the pandemic, remdesivir was a source of hope, with its favorable results from preliminary clinical trials leading to a surge of demand which coincided with the first spikes of infection. Unfortunately, it was all downhill from there for remdesivir's prospects.

To help meet early demand, Gilead agreed to give a handful of international drug manufacturers royalty-free licenses to produce remdesivir for the duration of the pandemic. While benevolent, this guaranteed that Gilead won't be able to capture all of the market for remdesivir, especially if other manufacturers can produce it more cheaply.

Shortly thereafter, a bigger problem revealed itself: Remdesivir isn't a game-changer drug. Some studies have failed to find that the drug is effective for COVID-19, and others have found its impact to be underwhelming. As a result, demand for remdesivir is no longer growing as rapidly as it was earlier in the pandemic.

Even at the peak of demand during the second quarter, Gilead's aggregate product sales dropped by 10%. On Oct. 1, Gilead announced that its manufacturing capabilities would be expanded enough to meet global demand in real time by the end of the month, even accounting for additional waves of infection.

This implies that demand has hit a ceiling. Unless Gilead finds a way to improve remdesivir's effectiveness, it won't be able to keep growing its revenue by selling the drug.

Abbott's testing products are flying off the shelves

Abbott Laboratories has the revenue growth momentum that Gilead doesn't, and that's all thanks to its substantial repertoire of diagnostic tests for the coronavirus. Since the first days of the pandemic, Abbott has released progressively more sophisticated assays to detect infections and pin down whether people have been infected in the past. Many of these tests have been met with fanfare by markets and clinicians alike, which can't be said about remdesivir. 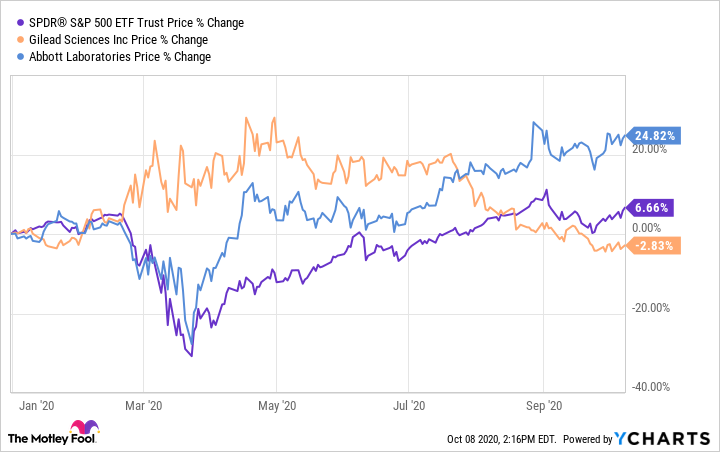 It's clear that testing is going to be consistently in demand at least through the end of the pandemic. While it's true that Abbott faces plenty of competition in the testing market, it's important to note that the market itself is growing rapidly, and shows no sign of stopping. In the U.S., the seven-day average of the number of daily coronavirus tests per 1,000 people has increased by 605% since April. This is starkly in contrast to the market for remdesivir, which appears to be leveling off.

By actively innovating with its test design, Abbott has deeply penetrated the coronavirus diagnostics market, establishing itself in the niches of rapid testing, high-throughput testing, point-of-care testing, and laboratory-free testing. Sales of Abbott's rapid coronavirus tests earned it $180 million in the second quarter, causing its rapid diagnostics segment to grow by 9.6%. Separately, the company's non-rapid coronavirus tests earned the company $283 million in the same period, leading its molecular diagnostics segment to grow by 233.6%.

Gilead has no equivalent product to the generate these financial successes, and its efforts to innovate on remdesivir have yet to bear fruit, despite high expectations for the company's revenue this year. Nor is remdesivir's future remotely assured, compared to the importance of diagnostic tests during the pandemic. Thus, as a result of its superior positioning in its market and the ongoing rapid expansion of that market, Abbott is the better coronavirus stock.