Please ensure Javascript is enabled for purposes of website accessibility
Log In Help Join The Motley Fool
Free Article Join Over 1 Million Premium Members And Get More In-Depth Stock Guidance and Research
By Will Healy – Oct 11, 2020 at 7:37AM

Look for Facebook to engage its user base in new ways in the coming years.

Five years is a long time, and predicting the future path for a social media giant like Facebook (META 0.07%) is fraught with uncertainties as it is with any company.

Facebook has succeeded in getting a significant percentage of the world's population on its platform. However, that level of success naturally leads to questions as to whether investors can continue to friend this communication stock over the long term. Nonetheless, the company has moved into other tech niches that could ensure its growth for another five years, and perhaps beyond.

Indeed, the near-term outlook for Facebook could bring an increasing number of likes. Although the company declined to give earnings guidance in its second-quarter 2020 report issued in late July, it believes year-over-year ad revenue will grow by about 10% in the upcoming quarter. Also, analysts expect profits to rise by 25% this year and by 27% in fiscal 2021. Facebook also maintains a base of 3.1 billion monthly active users, an increase of 12% over the last year.

Still, its current apps could face a significant growth limitation over the next five years that investors normally associate with companies like Coca-Cola and McDonald's. Facebook's current user base is about 40% of the world's population. Given that a large percentage of the unserved population does not have broadband access, Facebook could soon face global market saturation. 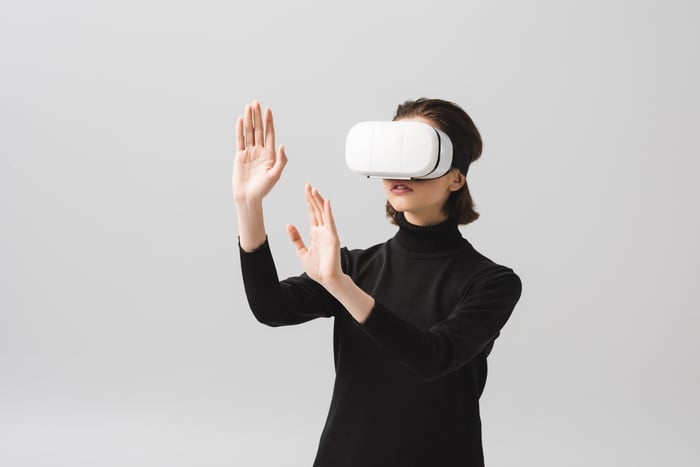 Hence, for the next five years, the company will likely have to lean on additional platforms to maintain its current growth rate. For now, those platforms are Portal and Oculus.

Portal is Facebook's smart video hardware. It allows for video calls using WhatsApp and Facebook Messenger and has Amazon's Alexa built into its product. However, Amazon offers a similar product called Echo Show, so the growth prospects for Portal remain unclear.

Nonetheless, Facebook could bring a more profound change to the tech market through Oculus. Oculus is Facebook's virtual reality (VR) hardware, which will offer a simulated environment for users.

To Facebook's credit, it holds a competitive advantage with Oculus. Facebook technically lags Sony in the sale of VR headsets, according to technology market research provider TrendForce. However, Facebook sells untethered devices, while Sony ties its headsets to its PlayStation gaming console.

Moreover, high consumer demand for VR devices exists, and at $299, the new Oculus Quest 2 will sell for $100 less than its predecessor. Facebook will likely develop applications aimed at its massive user base, further widening its competitive advantage over prospective competitors.

For now, Facebook defines sales of Portal and Oculus as "other revenue." While the $366 million in other revenue made up only a small portion of Facebook's $18.7 billion in revenue in the second quarter, the category grew by 40% from year-ago levels. In percentage terms, this growth rate is far ahead of advertising, which expanded by 10% over the same period.

Furthermore, considering the anticipated growth, Facebook remains a reasonably priced stock. It trades at a forward price-to-earnings (P/E) ratio of about 24, a modest multiple considering the profit growth predicted in the near term.

At its current valuation, Facebook is a clear buy. Looking five years ahead, investors who friend Facebook stock now should benefit from significant growth, especially if the company meets analyst profit-growth estimates.

However, investors should expect the company to have a different focus at that time. Instead of looking at ad revenue through rose-colored glasses, stockholders should put on an Oculus headset and prepare for a ride that is virtually assured to bring a more profitable reality. Even though VR products make up only a small percentage of revenue now, this category should continue to grow much faster than Facebook's ad revenue.

VR's power will not lie so much in hardware, which tends to become commoditized. Since Facebook now has over 3.1 billion users, VR will probably help it monetize its customer base, offering Facebook a competitive advantage over its peers.

Investors have already seen massive returns from Facebook's ability to connect people. Over time, the stock will probably move much higher as it makes VR-driven returns a reality.