These stocks could share big news this month, loosening the grip of the coronavirus on our lives.

As the calendar turns to October, our thoughts are very different than in past years. The excitement of candy, turkey, gifts, and family gatherings on the horizon have been replaced by the uncertainty of how we will keep our loved ones safe -- or whether we should celebrate at all. For the most part, we have continuously adapted to everyday life during the pandemic and found ways to connect with each other, enjoy our favorite affordable luxuries, and focus on the positives in a year that feels like it will never end.

But the pharmaceutical and biotech industries have offered a few glimmers of hope. There are two companies in particular that could go a long way to determining how soon we can put an end to the coronavirus pandemic and can get back to normal without putting others at risk. Investors should keep tabs on the news coming out of these healthcare stocks. 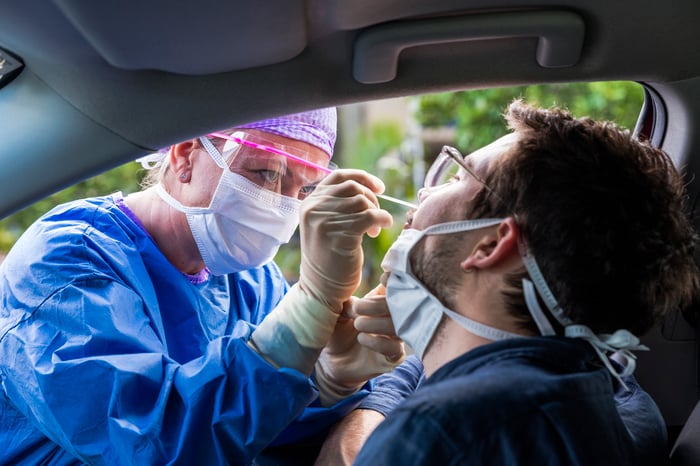 In April, the government announced that 5 million tests would be administered per day across the country. That goal was in line with the expectations of researchers at Harvard and Brown, who estimated the need for nationwide testing at about 4.5 million per day when adding together the number of people with COVID-19 symptoms, teachers, students, and frontline healthcare workers. The number of tests administered per day has risen to about 900,000 from around 700,000 in mid-September, but we remain a long way from that April target.

In India, researchers recently used gene-editing technology to create a cheap, paper-based test that can be used at home, similar to a pregnancy test. It costs $6.75 and is almost as accurate as the gold-standard lab-based tests in use around the world. In the U.S., an at-home coronavirus test would go a long way in closing the gaps in daily testing, but no developer has yet filed for U.S. Food and Drug Administration (FDA) authorization of such a test. However, Abbott Labs (ABT -2.48%) is making progress.

While lab-based polymerase chain reaction (PCR) tests can cost $100 or more, Abbott's new rapid test, which can deliver results in 15 minutes, costs a mere $5. The test still has to be administered by a healthcare professional, but it significantly improves turnaround time for results and reduces patient expenses. In a vote of confidence, the federal government has purchased 150 million of these tests. Abbott's management has not said whether they will seek approval for an at-home version of the test, but if it does, it could be just as impactful as a vaccine in preventing the spread of the virus.

Because investors' eyes are peeled on Moderna (MRNA -3.52%), the biotech company that is attempting to deliver a coronavirus vaccine, it's easy to miss the fact that the company has never had a treatment approved using its messenger RNA (mRNA)-based approach. The government has provided nearly $1 billion to support development of Moderna's coronavirus vaccine candidate, which showed promise, first in monkeys, then in humans.

In September, management shared the clinical trial protocols outlining criteria that would be required to seek FDA approval. The company is studying 30,000 participants, evenly divided between those receiving the vaccine and those given a saltwater placebo. The plan that management shared indicated the first review of data might not occur until late December, since enough people have to become ill with the coronavirus for the two groups to be compared.

Despite the timeline provided, Moderna's target of 60% vaccine efficacy allows stopping the trial after only a relatively few number of cases -- 151 to be exact. A total of 151 cases of COVID-19 among the huge trial cohort would be enough to determine if the candidate is 60% effective. Although this may speed up approval, it could overstate the efficacy of the vaccine. As cases climb again in some areas of the U.S., clinical trial participants are more likely to become exposed to the virus, potentially enabling management to release trial data sooner than anticipated.

But one significant hurdle has already been encountered: The study failed to enroll enough minorities. Despite making up more than 13% of the population, only 7% of the study participants were black. This under-representation is especially significant since COVID-19 affects black Americans at nearly three times the rate as it does white Americans.

As researchers enroll participants to try to more accurately represent the population and those most severely affected by COVID-19, days and weeks continue to pass. Despite enrollment issues and the timeline provided by the company, investors should keep a watchful eye on Moderna during the month. Its data safety monitoring board will perform its first review after only 53 COVID-19 cases are reported among trial participants. This panel could recommend stopping the trial if the vaccine is found to be 74% effective -- a higher bar than the target for the full trial.

Investors should not ignore this possibility. There are never any guarantees with clinical trials, but more COVID cases among trial participants and high efficacy could combine to end the Moderna trial early and spur distribution of its vaccine. Despite having no products currently on the market, this October surprise could launch the company to the head of the pack and make it a winner for investors.