Just because a stock is trading below $20 per share doesn't necessarily mean it's cheap. A company's valuation and share price should be viewed in relation to factors including sales, earnings, and expected growth in order to assess a potential investment.

On the other hand, paying attention to stocks that trade at low pure-dollar prices can sometimes be a good way to find undervalued shares, and catching these opportunities at the right time can lead to huge returns. Within that mold, read on to find out why you might not want to miss out on these three cheap tech stocks. 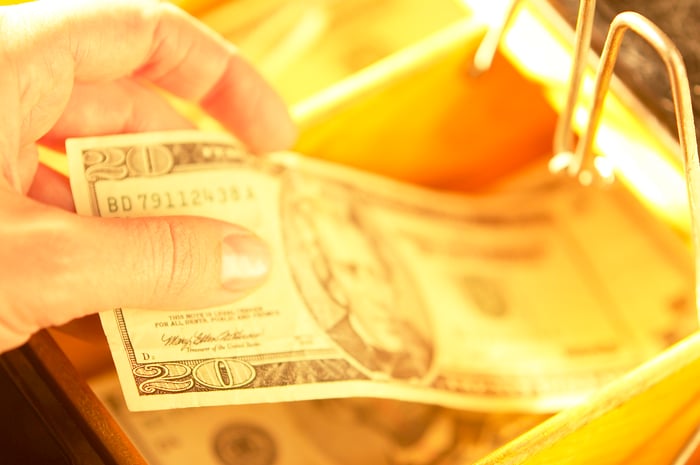 Himax Technologies (NASDAQ:HIMX) is far from being a household name, but there's a good chance you've used devices that incorporate components from the company. The Taiwan-based semiconductor designer is the market leader in display drivers: chips that are used to regulate the colors displayed by mobile screens, televisions, and other visual displays.

The market for display drivers has tended to be pretty cyclical, and it looks like it may be headed for an upswing after a rough patch in recent years. Himax stock has rallied about 40% in 2020, but it still trades down 67% over the last three years. The small-cap semiconductor company is valued around $670 million, and its stock is trading near $3.80 per share.

The semiconductor specialist published preliminary third-quarter results at the beginning of October with gross margins, sales, and earnings that each came in significantly ahead of management's targets. Substantial sales growth has been rare in recent years, but the company's preliminary results suggest that sales will be up near 46% year over year in the quarter.

But while a cyclical uptick for display drivers has the potential to spur substantial gains for Himax stock, the company has other avenues to explosive growth that could prove even more exciting. Himax has growth projects in categories including augmented reality, virtual reality, 3D sensing and imaging, and touch-based automotive displays. With the company's valuation still depressed and its display driver business starting to look stronger again, a significant design win in just one new category could send the stock soaring.

2. Glu Mobile: Interactive entertainment will only get bigger

Glu Mobile (NASDAQ:GLUU) is a small-cap video game publisher valued at $1.3 billion. The company's stock trades in the range of $7.60 and is valued at about 22 times this year's expected earnings. Glu admittedly doesn't have the development and marketing resources to match some of the gaming industry's larger players, but its stock still stands out as an appealing investment.

The company's share price is off roughly 30% from its 52-week high, and there's a good chance that the stock will recover and go on to post even greater gains. Glu franchises including Covet Home, Design Fashion, Tap Sports Baseball, and Kim Kardashian: Hollywood have continued to put up solid performance amid favorable player engagement trends that are benefiting the broader gaming industry.

On the other hand, investors should approach Glu with an understanding of why the stock pulled back following the company's last quarterly release. Management expects that bookings growth will see a substantial deceleration in Q3, and it also opted to delay an upcoming game into 2021 and shift development resources away from another title that had been in the works. The near-term growth outlook is a bit less rosy than it appeared early in the summer, but Glu still has explosive potential and looks attractively valued.

The video game industry is poised for big growth, and an expanding global audience and rising player engagement create favorable backdrops for Glu Mobile. The market is currently underestimating the company's ability to launch a hit new video game franchise, and the stock has the potential to be a huge winner at current prices.

3. Zuora: Tap into the growth of the subscription economy

These days, everything from word-processing and photo-editing software to video and music streaming is sold through subscriptions. With how prevalent subscription-based products have become over the last decade, you could easily get the impression that the subscription revolution is already complete. But it's actually still in its very early innings.

Zuora (NYSE:ZUO) provides software that makes it easy for businesses to implement, automate, and expand subscription-based payment models. The company already counts big names including Zoom, Wix.com, and DocuSign among its list of large enterprise customers, and it could benefit as the subscription economy sees big growth over the long term.

Recurring revenue streams are more predictable and profitable, and customers who have signed up for a subscription service will tend to stick around as long as the product stays relatively consistent. Subscription-focused businesses have also generally held up well amid this year's coronavirus-related pressures.

On the other hand, Zuora itself has seen sales growth slow due to the challenging economic conditions at hand. Companies tend to be less eager to make business pivots and adopt new software platforms when the outlook is uncertain, and the company is finding it more difficult to bring new customers on board in the current environment.

The company's shares are trading down roughly 22.5% year to date, about 70% from the lifetime high they hit in June 2018. Zuora now has a market capitalization of around $1.3 billion, and its stock trades near $11 per share.

The good news is that the economy should bounce back, and Zuora looks poised to enjoy long-term tailwinds. With more businesses looking to build recurring revenue streams and more commerce moving to digital channels, new customer additions will eventually pick back up, and the company's shares look cheap at present.