If you are wondering which presidential candidate will be better for the stock market, you're probably getting mixed signals. Americans are indeed conflicted, according to recent polls. Some surveys suggest a victory by incumbent Republican Donald Trump would be better for the stock market, while others that say a win by Democratic challenger Joe Biden would help the market more.

Lloyd Blankfein, who retired as Goldman Sachs' (NYSE:GS) chairman and CEO in 2018 but remains on as "senior chairman," recently weighed in with his thoughts on presidential politics and the markets in an interview for Time magazine.

Aggressive regulation vs. unpredictability and volatility

In an article published Oct. 16 titled "Joe Biden Goes After President Donald Trump's Edge on the Economy -- And It's Working," Blankfein discusses the trade-offs between the two candidates.

"Many in business dreaded an outcome where the Democratic Party controls both houses and they put in a very progressive platform of aggressive regulation, higher taxes, and other business-unfriendly stuff," Blankfein said. "But at this point, the unpredictability and volatility of the Trump administration have made people's heads spin enough to make it six of one, half a dozen of the other." 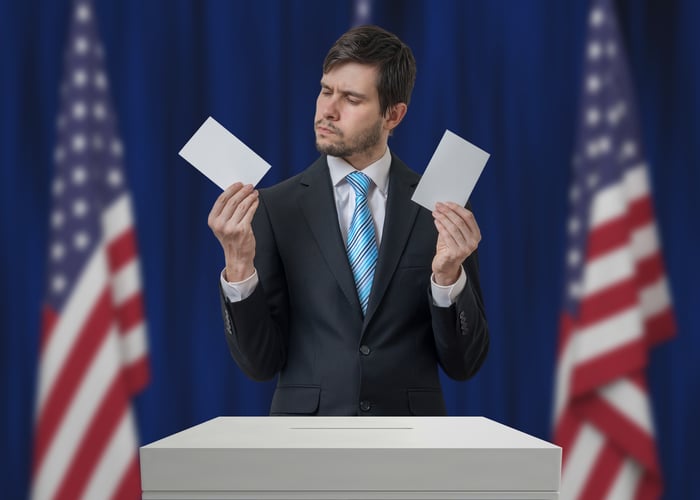 Blankfein added in the piece that investors "are not jumping off a bridge if Biden gets elected, because they're sick of what we have at this point." To that point, the Time article points out that people who work in the securities and investment industries have dominated five times more to Biden, $51 million, than Trump, about $10 million, citing data from the Center for Responsive Politics.

Blankfein supported Hillary Clinton's presidential bid in 2016 and once described himself as a "registered Democrat and a Rockefeller Republican," in an interview with CNBC back in 2012: "I'm probably conservative on fiscal issues and more liberal on social issues, and where that will get me, I'm not sure." Time pointed out that he has donated to both Democrats and Republicans.

Blankfein has also weighed in on presidential politics on the Twitter machine as of late.

"So far the stock market doesn't seem too upset at the prospect of Biden winning, despite Trump's more market friendly policies. Perhaps folks think their stocks and 401(k)s will do better with higher taxes and increased regulation than with nastiness and scorched earth," Blankfein tweeted on Sept. 30.

Lots of uncertainty, but stay focused

The Dow Jones Industrial Average is up 43% since Trump took office on Jan. 20, 2017, when it opened at about 19,804. That, of course, includes the fact that gains prior to March 2020 were entirely wiped out by the COVID-19 pandemic, only to fully recover and then some. But while the stock market has come storming back, unemployment remains high at 7.9% and the economy is in recession. Some fear that the overvalued tech sector, which led the market comeback, could be a bubble waiting to burst.

When you throw in uncertainty around the timeline for a COVID-19 vaccine, and its ultimate effectiveness, there are a lot of balls in the air. The pandemic has had a huge impact on the markets and economy, so which candidate wins, and how he deals with it, also figures into that equation.

What does it all mean for investors? Volatility, certainly in some sectors more than others. "The stock market hates uncertainty, and of course the election is the ultimate uncertainty," David Kelly, chief global strategist at JPMorgan Chase, told CNBC recently.

But that doesn't mean that all sectors and industries will react one way or the other. And it's critical to keep in mind that short-term volatility is just that -- short-term. Investors who got out back in March during the crash lost out on all the gains when the market came back. Stick with your plan, do your due diligence, and trust the long-term potential of your investments.