Apple (AAPL -1.77%) released the second-generation iPhone SE earlier this year, near the beginning of the COVID-19 pandemic that has upended the world. Leveraging a familiar strategy of adding state-of-the-art specs in a repurposed old chassis while charging a mid-range price, sales expectations for the iPhone SE 2 were high as the public health crisis has impacted discretionary incomes. Counterpoint Research initially estimated that Apple would sell 15 million iPhone SE 2 units this year. 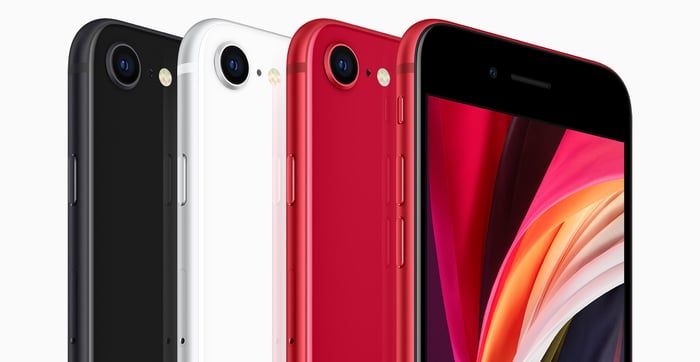 The midrange iPhone was a hit

The iPhone SE 2 represented approximately 22% of the iPhone mix in the U.S. during the third quarter, according to CIRP. The iPhone 11 lineup accounted for another 64% of sales, which was before the Cupertino tech giant unveiled the iPhone 12 after the end of the quarter. Like many retailers, Apple's retail operations had to quickly adapt to lockdown orders and safety guidelines imposed by governments around the world.

"In its first full quarter of sales, the $399 iPhone SE accounted for almost one-quarter of iPhone sales," CIRP partner and co-founder Josh Lowitz said in a release. "During a challenging quarter, with COVID-19 altering the retail landscape and delaying launch of new 2020 flagship models, the new SE model succeeded in attracting customers with old phones in need of an upgrade."

Apple's represented a greater share of total U.S. retail distribution than other channels like big-box electronics stores or wireless carriers. An estimated 21% of iPhone sales were conducted directly through Apple (including both retail stores and online), up from 13% a year ago. Overall, carriers remain the dominant distribution channel for people to buy new smartphones, accounting for 71% of domestic iPhone sales last quarter.

CIRP's estimates were derived from a survey of 500 Apple customers in the U.S. in the third quarter.

The iPhone SE 2 has clearly resonated with consumers, particularly when acknowledging the macroeconomic impacts of the virus outbreak, which were partially mitigated by government stimulus efforts. CEO Tim Cook noted on the last earnings call that the device was appealing to people that prefer smaller phones, while Apple is seeing a higher number of users switch from Android to the iPhone SE 2.

"We saw marked improvement around the world in May and June, which we attribute to an improved level of customer demand helped by the very successful launch of iPhone SE and economic stimulus packages," CFO Luca Maestri added. Cook said that the mid-range iPhone's momentum was continuing into the third quarter.

The mix will inevitably shift aggressively toward the iPhone 12 lineup in the fourth quarter. Apple reports quarterly results on Thursday.