Plastic isn't evil, which is why Coca-Cola is working with the material even as it looks to clean up its environmental footprint.

Running an international giant like Coca-Cola (KO -0.53%) is a complex affair that involves making a lot of trade-offs. For a long time, the environment and the company's effect on it weren't part of the equation at all, but increasingly that's changing.

However, creating a cleaner world isn't as easy as it may at first seem, and the obvious answers sometimes aren't so obvious, which is why Coca-Cola is sticking with plastic while it works to get green.

Some environmental groups estimate that there are over 50 trillion microscopic plastic particles in the world's oceans. That's roughly 269,000 tons of plastic. But plastic isn't just microscopic -- plastic waste also collects in huge ocean swirls. There's one called the Great Pacific garbage patch and it has its own Wikipedia page. Clearly plastic is an environmental nightmare, given that it's usually made from oil and can last hundreds of years, by some estimates, depending on the type. 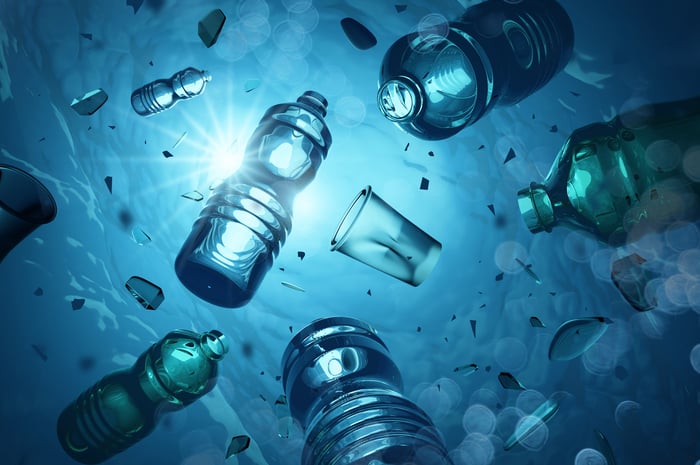 No wonder environmentalists want to see plastics go away. Unfortunately, it's just not that easy. Plastic is a very useful substance and, despite what you might want to believe, the alternatives aren't always better. For example, Coca-Cola explains that aluminum and glass can actually have worse environmental footprints than plastic depending on how they are made and whether they get recycled or reused. The key here is recycling and reusing, which -- when done right -- can make plastic just as desirable a substance as aluminum or glass.

Environmental, social, and governance (ESG) investors, then, should take a closer look at what this beverage giant is trying to do as it puts its World Without Waste initiative into action. The first, most important piece of the puzzle is to get rid of low-hanging fruit. That is basically plastic that is hard to recycle, like the six-pack rings that can choke birds when they get tangled up in them. These often just get tossed into the trash, and even if they didn't, recycling them wouldn't be very desirable. Instead, Coca-Cola is looking at alternatives like paper boxes. Equally bad is shrink wrap, which the company is looking to move away from as well.

However, the plastic used to make bottles is different. This is where recycling comes into play, which is the main thrust of Coca-Cola's sustainable packaging push. The company wants to make 100% of its packaging recyclable by 2025. It's up to 88% today. Meanwhile, it also wants to get recycled products up to 50% of its packaging by 2030. Right now the company is at 20%. These are sizable goals that involve material research and development.

For example, Coca-Cola is looking at ways to use plastic collected from the sea (remember the Great Pacific garbage patch?) and utilize that material in its bottles. This is no easy task because it involves extra cleaning and processing. However, the company has created a sample bottle that is 25% sea plastic. So it's well on its way toward making this goal a reality, and potentially helping to clean the oceans along the way.

All of that said, it's worth noting that Coca-Cola reports that it has 18 markets in which it offers bottles made from 100% recycled materials. The company operates in more than 200 countries around the world, so that may seem like a tiny number. But a journey of a thousand miles starts with a step. Indeed, it's going to take a lot of little steps like this to get to where Coca-Cola wants to go. The path to a cleaner world involves plastic all along the way. The key, as Coca-Cola is expressing through words and action, is to use it more wisely.

As Coca-Cola works to clean up its environmental footprint, it's important to remember that this is a slow-moving process. The company has set lofty goals that ESG investors should monitor closely, but don't expect any overnight sensations here. And the work Coca-Cola is doing can have trickle-down effects on the broader industry, getting them to follow the leader or try to compete can amplify efforts being made.

Before long-term investors simply toss Coca-Cola from a portfolio because of its ties to the plastic economy, they should really consider what it is doing to change. Perhaps you only want to own totally environmentally friendly companies for your investment portfolio, but sometimes backing an industry giant that is working to get better can be just as useful to the cleaner environment effort, even if it doesn't sound like it at first glance.