The stock has dropped a long way from its 52-week highs, but the company made important announcements in October.

Shares of Beyond Meat (BYND -3.96%) sank on Friday, dragged down with the rest of the market. As of 3 p.m. EDT, the stock was down 6%, and it's now fallen around 27% from 52-week highs reached earlier in October. Falling this far this fast would seem to indicate a fundamental problem with the business, but that's not the case with Beyond Meat.

Beyond Meat is a growth stock, increasing shareholder value via an aggressive expansion plan. The plan is multifaceted and includes new products, new markets, and new distribution channels. The company made progress on all three fronts in October. 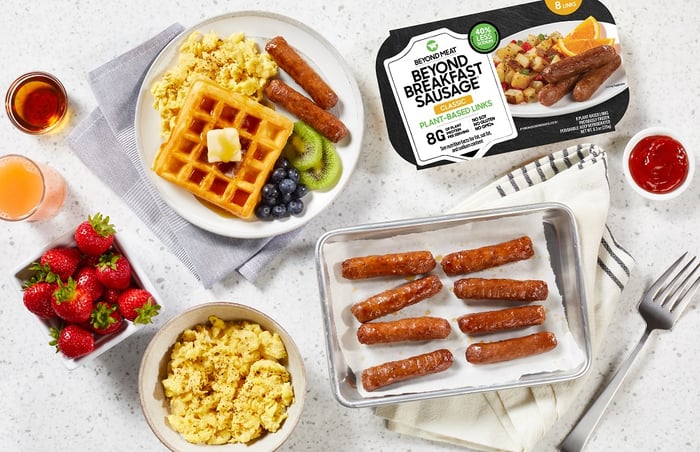 Regarding new products, Beyond Meat announced Beyond Breakfast Sausage Links on Oct. 8. Then on Oct. 11, the company announced KFC China, part of Yum China Holdings, would carry the Beyond Burger at over 200 locations for a limited time, helping it make progress in its new China market. Finally, on Oct. 23, it announced food company Golden Krust would make a new Jamaican-style patty using Beyond Meat product, helping it expand distribution further.

Beyond Meat is doing what it needs to do. But in the short term, it's impossible to predict which way the stock will go. There's no reason for the stock to drop today, but when the market falls, it drags almost all stocks down with it, even companies that are performing well.

That's why it's important to stay focused on the long term. Over time, stock returns more closely align with business results. For Beyond Meat, we'll get a clearer picture of how its business looks when it reports earnings for the third quarter of 2020 on Nov. 9.