The big biotech's recent clinical setback appears to be overshadowing its sizzling growth.

Vertex Pharmaceuticals' (VRTX -0.46%) great year screeched to a halt a couple of weeks ago. The company pulled the plug on a phase 2 study evaluating alpha-1 antitrypsin deficiency (AATD) candidate VX-814 because of safety concerns. All of the big gains Vertex had generated so far in 2020 evaporated.

Investors hoped for some good news from Vertex with its third-quarter update after the market closed on Thursday. The reality is that Vertex pretty much hit a home run in Q3 for shareholders, and even more so for cystic fibrosis (CF) patients. However, it's likely that few investors are cheering those results. 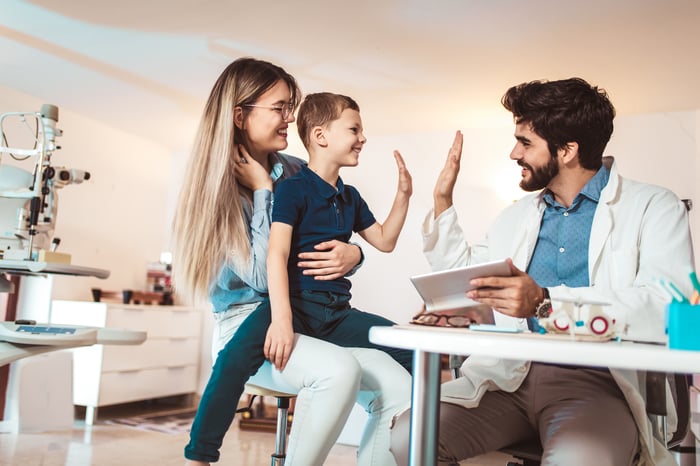 Vertex reported revenue in the third quarter of $1.54 billion, a 62% year-over-year jump. This result topped the average analyst estimate of $1.48 billion.

The company announced Q3 net income of $667 million, or $2.53 per share, based on generally accepted accounting principles (GAAP). This reflected tremendous improvement from Vertex's GAAP earnings of $58 million, or $0.22, generated in the prior-year period.

Why didn't the biotech stock jump significantly after reporting sizzling sales growth? We have to go back a quarter.

In Q2, Trikafta/Kaftrio generated sales of $918 million. Its latest result reflected less than 5% sequential growth. That's not bad at all. However, it does show that momentum in the U.S. is slowing after a fantastic commercial launch for the CF drug late last year.

Another issue is that Trikafta/Kaftrio is stealing the thunder of the rest of Vertex's CF lineup. Sales for all three of its other approved CF drugs fell year over year and quarter over quarter.

Still, Vertex can pat itself on the back for yet another strong quarter. It can also feel very good about its growing cash stockpile. The company reported cash, cash equivalents, and marketable securities totaling $6.2 billion as of Sept. 30, 2020. That's up from $3.8 billion at the end of 2019.

Thanks to Trikafta/Kaftrio, Vertex provided even more good news for investors by raising its full-year outlook. The company now anticipates full-year revenue of between $6 billion and $6.2 billion, up from its previous guidance of revenue between $5.7 billion and $5.9 billion.

Vertex also made significant progress in recent months toward expanding the markets for its CF drugs. Most importantly, it won European approval for Kaftrio in treating CF in individuals ages 12 and older with one F508del mutation and one minimal function mutation or two F508del mutations.

Many investors are no doubt still concerned about Vertex's second act after CF. CEO Reshma Kewalramani acknowledged that the company was "disappointed by the VX-814 outcome." However, she noted that Vertex expects to report phase 2 data from another AATD candidate, VX-864, in the first half of 2021.

Kewalramani added, "Our pipeline spans multiple diseases, and multiple important clinical readouts are expected from now through the end of 2021, each of which we expect will hold transformative potential for patients and further growth for Vertex."