Amgen and Bristol Myers Squibb have both drawn heavy criticism for their pricing practices.

Drugs in the U.S. are estimated to cost around 56% more on average than in similarly industrialized countries, and Americans are fed up. With prices for life-saving medications rising consistently, it's no surprise that people are irate and desperate for change. But should investors fear that public backlash will harm the share prices of their healthcare investments?

The sole way that backlash over drug prices would dent pharma stock prices is from policy change, whether it's through new laws or changes to the U.S. regulatory landscape. So far, political action to address rising drug prices has been scant, though congressional investigations into the causes of price hikes have been ongoing since at least 2015. At the end of September, the U.S. House of Representatives held hearings with testimonies from the CEOs of major pharmaceutical companies, including Bristol Myers Squibb (BMY -0.01%) and Amgen (AMGN 0.06%). Congressional researchers assembled a substantial set of reports that document how drug price increases were handled at each of the companies whose CEOs were scheduled to testify, and the findings were very illuminating. 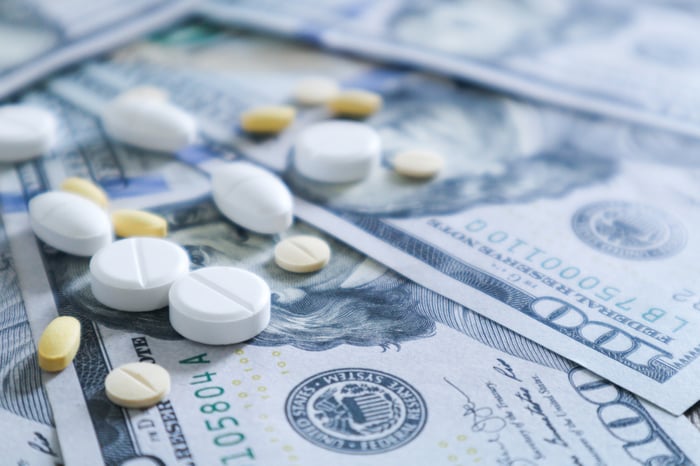 Bristol Myers and its subsidiary Celgene were singled out at the hearings on account of the rising price of its immunomodulatory drug Revlimid, which is prescribed for multiple myeloma. As a result of repeated price increases, the congressional report found that the monthly cost of Revlimid has more than tripled since its 2005 launch. This means that health insurance companies and uninsured patients are billed as much as $16,023 for each month of treatment. Revlimid is also covered by Medicare, but patients can still be left with copays upwards of $800 per dose.

Investors probably shouldn't be thrilled at the prospect of a company's leadership risking public outcry over price increases just to make the quarterly earnings figures look better. Likewise, consumers have every right to be infuriated by the company's actions, which are to their sharp and tangible detriment. On the other hand, there's no evidence that this outcry has hurt the earnings of Bristol Myers or any other pharmaceutical company, and harm to share prices may be transient.

Other portions of the congressional report pertain to Amgen. The report found that repeated price increases for Amgen's drug Enbrel were the result of a tit-for-tat strategy to maintain price parity with AbbVie's (ABBV 0.08%) drug Humira. If Humira's price increased, Amgen planned to increase the price of Enbrel to remain competitive. Overall, this is a favorable sign for Amgen investors. Demand for Enbrel is inelastic because there is a finite pool of eligible patients who need treatment, so there's no advantage in offering a large discount relative to competing products.

Maintaining a price level that's just below that of competing products is thus the most profitable strategy. Once again, consumers are left with the short end of the stick. But this does invite the question of how much a company could raise prices to keep up with its competition before facing public backlash.

What's the risk profile for 2021 and beyond?

In mid-September, President Trump issued an executive order which was aimed at controlling prescription drug prices. The order directs the federal government to negotiate with drug manufacturers when it purchases drugs that are covered by Medicare. While it's too early to see whether the order has had its intended effect, it is evidence that the risk of pricing backlash does include a real chance of political action.

Congress has also considered legislation to curb drug prices. H.R. 3, also known as the Elijah E. Cummings Lower Drug Costs Now Act, would require federal payors like the Department of Health and Human Services to negotiate drug prices. It would also cap the maximum price attainable by negotiations to 120% of the average price of a given drug in a handful of peer nations like France, Germany, and Japan. Furthermore, the bill would require drug manufacturers to issue rebates to federal payors for drugs that are both covered by Medicare and also cost $100 or more.

While these proposed changes to the law are highly favorable for consumers and especially for Medicare patients, they would be detrimental to the bottom line for both Amgen and Bristol Myers, not to mention many other pharmaceutical companies. The legislation has no chance of passing Congress with the current distribution of political power, though a Democratic victory in the upcoming election could pave the way for it to proceed.

How should investors use this information? In short, by refraining from investing in a company that has drawn flak from regulators and the media as a result of overpricing its drugs. Though raising prices has been a reliable way to pad margins so far, multiple wings of government have started to move in favor of curbing this practice, and it probably won't be viable in the long run. At the same time, if the price of certain drugs becomes tied to the cost of generic versions, it's reasonable to suspect that generic drug manufacturers will flourish.