Vertex Pharmaceuticals (NASDAQ:VRTX) reported its third-quarter results after the market closed on Thursday. Based on the stock's subsequent movement, you'd probably think the company announced a mix of good and bad news. That wasn't the case at all. Vertex actually hit a home run with its Q3 results, delivering sizzling revenue and earnings growth and easily beating Wall Street estimates.

Why weren't investors more fired up? There's still a significant level of uncertainty about Vertex's future following the recent discontinuation of a phase 2 study evaluating VX-814 as a potential treatment for alpha-1 antitrypsin deficiency (AATD).

I think that the reaction to Vertex's pipeline setback has been way overdone. Here are three really good reasons to still buy the biotech stock. 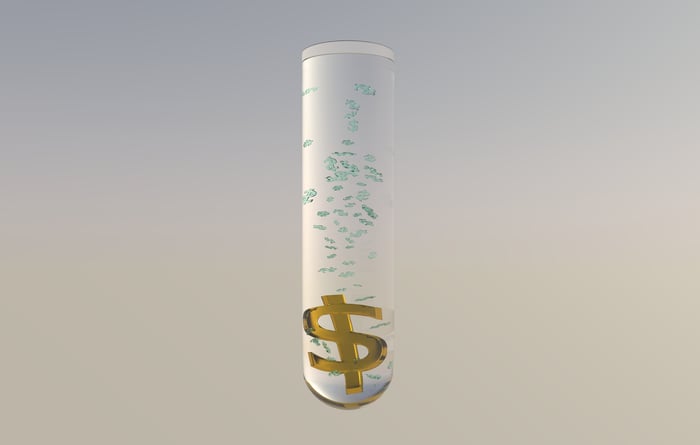 Don't be misled by the slowing sequential sales growth for Trikafta/Kaftrio, Vertex's newest blockbuster cystic fibrosis (CF) drug. That's mainly a function of the remarkably fast ramping up of sales in the U.S. market earlier this year. Vertex still has a big growth opportunity in CF.

The European launch of Kaftrio is just getting started in Germany, England, Ireland, Scotland, Wales, and Denmark. Expect a lot of pent-up demand for the drug. Vertex is working hard to secure reimbursement agreements in other European Union countries and across the world. There are also additional growth opportunities in winning label expansions and reimbursements for younger children and for additional genetic mutations for all of the company's CF drugs.

These efforts should be enough to give Vertex a clear growth runway for years to come. However, there is still another 10% of CF patients that the biotech's current therapies can't address. Vertex hopes to eventually be able to help those remaining patients as well.

2. Plenty of potential remaining in the pipeline

Some investors seemed to respond as if Vertex didn't have any pipeline candidates left after it threw in the towel on experimental AATD drug VX-814. However, the company actually has clinical-stage programs in five other disease areas outside of CF.

CEO Reshma Kewalramani acknowledged in Vertex's Q3 conference call that the discontinuation of the VX-814 program is "disappointing." However, she noted that early and mid-stage discontinuations of clinical programs aren't unusual. She added, "Our enthusiasm for the AATD program is not diminished."

Vertex's pipeline also includes promising therapies targeting rare diseases sickle cell disease, beta-thalassemia, and focal segmental glomerulosclerosis (FSGS). Several of these programs have important data readouts on the way by the end of next year. The company also plans to advance its type 1 diabetes candidate into early stage testing in 2021.

Kewalramani candidly stated that "not all of the molecules will succeed." She added, though, that "not all of them have to." Vertex believes that at least two or three of its pipeline programs will achieve success, enabling the company to deliver strong growth over the long run.

Last, but certainly not least, don't think for a second that Vertex's pipeline is static. It's highly likely that the big biotech will bolster its pipeline in the near future through acquisitions, licensing deals, and partnerships.

This gives Vertex a lot of financial flexibility for additional dealmaking. Kewalramani stated point-blank in the Q3 call, "We certainly have the capacity to do more deals or bigger deals." She also said, "We believe at our core that the best deployment of our capital is in innovation." Next year could be exciting for Vertex shareholders if the company puts some of its cash to work on the acquisitions front.