Give your portfolio a shot of growth with these up-and-coming companies.

The price of a stock in absolute dollars is not that important in itself, since valuing a stock involves comparing the price with measures of business performance and growth. Also, investors can buy fractional shares now, making stocks with high share prices accessible to even the smallest investors.

But stocks with a long history of growth tend to have high share prices, so perusing stocks with low dollar prices on their shares can help us find stocks that are still early in their growth years. Here are three stocks that sell for less than $20 per share, have strong growth prospects, and could be rising stars of the future. 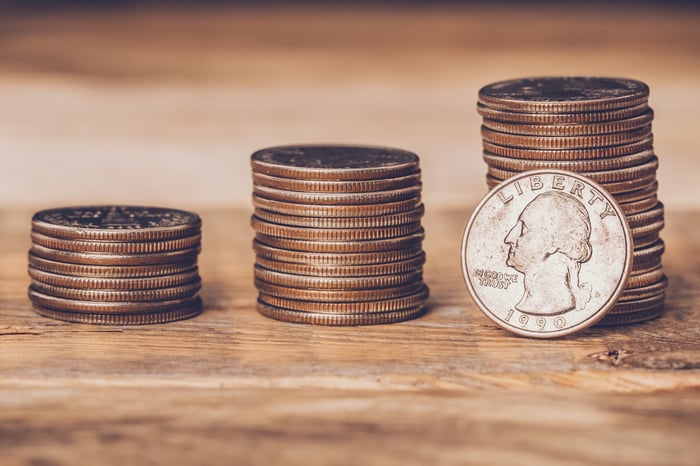 Growth at Upwork (UPWK 5.05%) has continued at a steady pace right through the months of the pandemic, and the struggles of businesses in 2020 may be laying the groundwork for even more lasting growth in the future. The company specializes in matching up freelance workers with job opportunities, but employers are finding that Upwork's products are valuable for managing a remote and flexible workforce.

For years, Upwork has allowed clients to onboard their existing freelancers onto its platform rather than just using it for finding them in the first place. But as employers have shifted part or all of their workforce to remote work during the pandemic, some of their larger customers have been moving employees as well as freelancers onto their platform to simplify payroll and management of the remote workforce. Upwork is working on expanding the availability of those options, which embeds the company's products deeper into their clients' core business.

The shift to a remote workforce during the pandemic is also reducing one of the main points of resistance to using freelancers: the idea that workers must be physically in the office to contribute. Companies are finding they can successfully fill roles with workers living in cheaper locations.

Upwork likely lowballed its guidance for Q3 revenue, estimating 14% growth after multiple quarters of increases of 19% or better, saying it was cautious about macro conditions. In the short term, I think the stock could get a boost after Upwork reports earnings on Nov. 4. Longer term, the pandemic will prove to be a tailwind for a company that's evolving from a matchmaker to the leading provider of flexible talent solutions in the gig economy. Despite a run-up in the share price this year, it still sells for 10% below the closing price on the first day of trading after its initial public offering.

Limited entertainment opportunities during the pandemic have led to great results from video game stocks, and Zynga (ZNGA) has been in the sweet spot of mobile and social games to fill a void in consumer lives. Acquisitions, internally developed titles, and improved monetization spurred by live events is driving rapid expansion of the company's business, and that trend should continue.

Revenue in the second quarter ballooned 47% year over year, beating the company's guidance. Daily active users (DAUs) grew 4% from the year before to 22 million, but revenue gains are coming from increased spending by those users, largely a consequence of the popularity of Zynga's live events. Average bookings per mobile average user was $0.248, up 32% from a year ago and above the $0.216 in Q1.

Zynga's acquisitions are an important part of its growth strategy, and the company has plenty of cash to snap up new expansion opportunities. The purchase of 80% of Rollic for $168 million in August allows it to enter the hyper-casual game segment, pick up another 5 million DAUs, and boost its advertising revenue, which has been declining this year. Zynga had $1.3 billion in cash on its balance sheet last quarter, so investors can expect plenty more acquisitions in the future.

Looking forward, Zynga, which reports earnings on Nov. 4, expects full year revenue of $1.8 billion and bookings of $2.2 billion, growth of 36% and 41%, respectively. Although the company is not yet profitable, it sells for 3.7 times analyst estimates of 2021 bookings, very reasonable for this sort of growth.

The pandemic took a toll on ad spending in the second quarter, but with businesses reopening, the return of live sports, and the election, Q3 should be a different story. Magnite (MGNI 1.40%) operates a "sell-side" advertising platform that allows content publishers to auction off space to advertisers, and its Q3 earnings report on Nov. 9 should paint a brightening picture.

Magnite provides a way for advertisers to buy space across various platforms such as web sites, mobile applications, and connected TV (CTV), but it's CTV that's hot. In last month's earnings report, Magnite said that while CTV revenue was up 12% year over year in Q2, it accelerated to 50% growth in July, the first month of Q3. Total ad spending may not completely recover this year, but Magnite is positioned well to capitalize on a boom in streaming television content. CTV was only 19% of Magnite's revenue in Q2, but the company is investing heavily in that channel, and if it continues to be successful, it should drive accelerating growth as it becomes a larger part of the business.

Shares of off-the-radar Magnite, which was formed after the merger earlier this year of Rubicon Project and Telaria, are down 31% from their 365-day peak, giving it a market capitalization of about $1 billion, a fraction of highly followed buy-side ad platform company The Trade Desk (TTD 4.42%), which is valued at $26 billion and was hitting all-time highs in early October.