There's a lot of uncertainty in the market these days. With Election Day around the corner, investors are trying to position their portfolios to align their fortunes with whoever comes out on top once the votes are all counted.

The best investing choice -- now, ahead of Tuesday's ballot showdown -- is a stock that will hold up well under President Trump or former Vice President Joe Biden at the country's helm. It's a name you know, but don't sleep on Target (NYSE:TGT) as a smart stock that's built to succeed no matter who's in the Oval Office on Jan. 20. Let's take a look at why the "cheap chic" retailer will win no matter who emerges victorious this week. 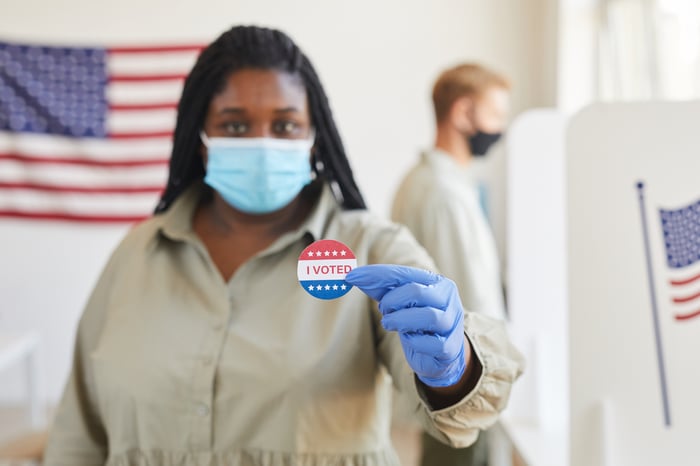 The Trump case for Target

If a Trump victory is a vote for more of the same, you won't see Target complaining. The stock clocks in with a return of 168% since his 2017 inauguration. Target has historically fared well when the economy's humming along, but it's showing its all-weather appeal these days.

Target has thrived in the pandemic, staying open while most conventional retailers succumbed to the lockdowns. Target's role as an essential retailer helped keep business brisk during the early stretches of the COVID-19 crisis, but it's faring even better now when most of the concepts that haven't gone under are back in operation. Revenue climbed 25% in its latest quarter, with earnings soaring 85% for the period.

Target checks off all of the boxes you'd like in a steady producer. It succeeds in good times because folks have more money to spend. It holds up well in downtimes as it attract shoppers trading down from full-priced department store chains. Target also pays out a reasonable 1.8% yield, and the taxing climate -- Target's earnings have improved markedly under Trump's tenure, with an assist from lower corporate tax rates -- will probably continue to be kind under Trump. The big twist is that Target may perform even better under Biden.

The Biden case for Target

You don't need to dump Target if Trump loses. The mass market retailer will also do well under Biden. Let's start with the minimum wage, because it's a bigger deal here than we think. Biden's platform supports a federal minimum wage of $15 an hour. A lot of retailers are fretting over the move, as they often rely on seasonal and either young or old employees who accept working for less than that.

However, three years ago, Target made it a public goal to get to $15 an hour by 2020, and on July 5 that goal became a reality. All U.S. hourly full-time and part-time team members at stores, distribution centers, and headquarters are now making at least $15 an hour at Target, and the chain claims that its starting hourly wage is 20% higher than the U.S. industry average. In short, the one thing that may price many of its rivals out of contention is already in the mix in Target's blowout results. Rivals below the $15 mark may have to raise prices or sacrifice margins, but it will be business as usual for Target. It will take advantage of the higher labor costs everywhere else.

A welcome byproduct of the bump to $15 an hour is that it will improve the discretionary income available to the low-income homes where the breadwinners are currently earning less than that. This could be a perfect situation for Target. Some of its competitors will get pinched, but many of its customers will have more money to spend.

It's fair to also say that a lot of Biden's platform promises to pump up spending on infrastructure and other jobs that could help widen the middle class. If Biden's able to live up to his promise to not raise taxes for families making less than $400,000, the slim slice of the market that would see their pre-tax earnings go down isn't exactly a prototypical Target shopper.

Investing in retail stocks is risky, but Target has more than lived up to its billing in these changing times. It has mastered the pandemic and the recession, and it should keep beating the market as an investment no matter who is in the White House next year. It should keep rocking if Trump wins, but it could also start rolling if Biden wins on Tuesday.