ExxonMobil (NYSE:XOM) reported its third-quarter results on Friday. The company's loss for the quarter shrank to $680 million compared to $1.1 billion in the second quarter. While that looks like a positive development, it is in stark contrast with $3.2 billion in profits Exxon churned out in the same quarter last year. Low oil prices, coupled with demand destruction due to COVID-19, have taken a toll on ExxonMobil's earnings, putting its dividends at risk. Let's discuss the factors that may drive the company's performance and dividends going forward.

Though oil and liquids prices and demand improved from the second-quarter lows, the improvements weren't enough to swing ExxonMobil back to profits. The company's total production stood at 3,672 koebd (thousands of oil equivalent barrels per day), nearly flat from 3,638 koebd in Q2. Production volumes fell from 3,899 koebd in the year-ago quarter. In the downstream segment, refinery margins during the quarter were at record low levels, severely hurting the segment's earnings.

An unfavorable environment left ExxonMobil with no options except to cut its costs to reduce losses. The company is cutting down its capital expenditures and other operating costs, including its workforce. ExxonMobil is reducing costs wherever possible, but it has kept its dividends intact so far.

The company sees improving oil market conditions ahead. According to ExxonMobil, the industry exploration spend is currently at its lowest level in decades. Continuing recovery in liquids demand and low investments by the industry will result in demand exceeding supply. This may boost prices of energy commodities. Similarly, refinery capacity reductions and closures will, over time, help to improve margins.

ExxonMobil believes it can maintain its dividends in 2021 even if oil and gas prices, and refining and chemicals margins, remain within the low end of their respective 10-year ranges. In the absence of requisite earnings growth, ExxonMobil hopes to lean on asset sales and cost reductions -- but does not intend to increase its leverage -- to maintain its dividends. The company fully understands its dependence on oil prices to be able to grow dividends in the long term.

It's all about oil prices

ExxonMobil derives its earnings from its upstream, downstream, and chemicals operations. Oil prices drive earnings of ExxonMobil's upstream segment, which is its largest segment. So, the company's earnings tend to be highly volatile. 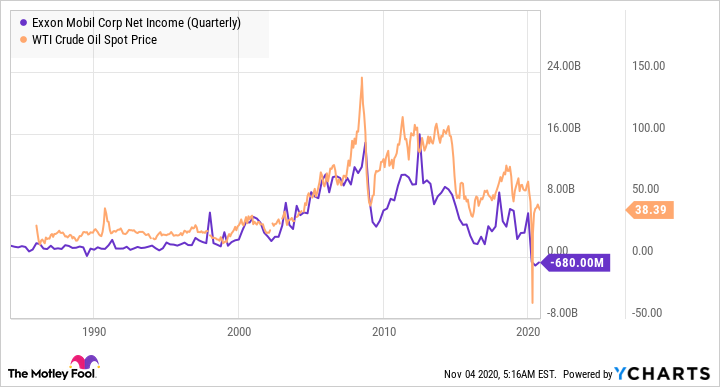 To get a sense of the extent to which Exxon's earnings are tied to oil prices, refer to the above graph, which shows ExxonMobil's income over 35 years along with oil prices over that timeframe.

Oil exploration and production is a capital-intensive activity spread over years. Energy companies' capital investment decisions are based on global demand-supply dynamics. With oil prices around $100 per barrel for roughly a decade up to 2014, oil and gas companies, including ExxonMobil, made investments that were profitable at those prices. Energy companies weren't prepared for the 2014 commodity price slump. That sent energy stocks reeling, and they haven't recovered even after more than five years.

Around the middle of 2017, oil prices started improving and reached an average of around $55 to $60 per barrel. Companies started adjusting their operations for this "new-normal" price. However, that price level also didn't sustain. Oil prices have averaged around $38 per barrel in 2020. It will take years before oil and gas companies could operate profitably at this price level. Until that time, the sector may continue to see consolidation, as has been happening over the last five years.

Whether ExxonMobil will be able to keep its dividends intact is uncertain. The company may be able to sustain them if oil prices improve soon. But nobody can predict that for sure. Still, maintaining dividends is just one aspect, albeit an important one, from a shareholders perspective. Over time, ExxonMobil's success will depend on its ability to bring down its costs of production, divest non-strategic assets, and reduce its debt burden.

Improvements in oil markets should help ExxonMobil. Improving demand for oil products, reduced industry exploration and production spend, and a key long-term role of fossil fuels to meet rising global energy needs may together provide a conducive environment for ExxonMobil to grow in the long term, but the path ahead sure looks rocky right now.