Xbox is set to kick off the next generation of gaming when it releases its new console, the Xbox Series X, next week. With the launch fast approaching, Xbox parent company Microsoft (NASDAQ:MSFT) is making moves to ensure it has the content to compete against the console's archnemesis, Sony's PlayStation.

First launched almost 20 years ago, Xbox has grown into a major player in the gaming industry, competing alongside devices from gaming giants Sony and Nintendo. Xbox has created a profitable services ecosystem with Xbox Live and now Xbox Game Pass, a subscription granting users on-demand access to a catalog of games.

Xbox Game Pass was introduced in 2017 and as of July had more than 10 million members in 41 countries. Game Pass currently provides unlimited access to a library of 100 games published by Microsoft as well as third parties. This is kind of like Netflix but for video games, and it has huge potential.

The Xbox Series X gaming console is scheduled to be released on Nov. 10, just in time for the holiday shopping season. In order to broaden its appeal, there will be two price options. The Xbox Series X is a traditional console offering with the latest and greatest gaming technology and will retail for $499. A $299 model will also be introduced, called the Xbox Series S. It will have less storage, slower processing speed, and will not ship with a disc drive.

Microsoft is also using a little creativity to ensure it can tangle as many customers as possible into its platform. The company is bundling its latest Xbox console with Game Pass and enabling customers to pay monthly over 24 months instead of paying the full console price upfront. This bundle is called Xbox All Access and will be available for the Series X at $34.99 per month and the Series S for $24.99 per month for 24 months. Of course, gamers are welcome to buy a console upfront and pay the $9.99 monthly price for Game Pass separately; however, the 24 months bundled pricing is a nice way for gamers to spread out the cost while gaining access to the full online experience. It will be interesting to see which choices consumers opt for. 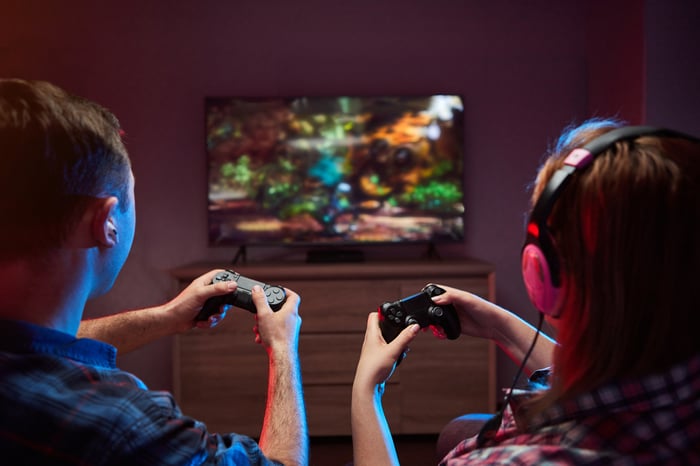 With all the fanfare around the new Xbox launch, Microsoft's latest acquisition has almost been lost in the noise. On Sept. 21, Microsoft agreed to buy video game studio ZeniMax Media for $7.5 billion in cash. ZeniMax is the owner of some of the industry's leading game studios, the biggest of which is Bethesda Softworks, the maker of Fallout and Elder Scrolls.

Microsoft is willing to pay $7.5 billion to acquire gaming studios because it wants to capture more of the global gaming market. In 2021, the gaming industry is expected to generate more than $200 billion in revenue, and selling game titles is the largest component of the pie.

In the battle for game exclusives that Xbox was losing, it is trying to go with the same strategy as Sony, acquiring developers in hopes of producing franchise games. Sony had more exclusive content and a large web of relationships with Japanese game studios and buying ZeniMax is yet another step to close the exclusive-content gap.

In 2014, Microsoft acquired the maker of Minecraft for $2.5 billion and in all likelihood, the company will continue to acquire studios as it builds a content library that it can exclusively offer on the Xbox platform and add to its growing Game Pass subscription service. Adding more content will strengthen its ecosystem and, in turn, sell more console units.

Microsoft expects the acquisition to close in the first half of 2021.

Throughout its history, the biggest issue Xbox has had to face is lagging Sony on exclusive content. The video game industry has shown that building great content and keeping it exclusive is a successful strategy because content can make the difference in whether a customer chooses one console over another.

This time around, Microsoft is beefing up its content arsenal, but it is also testing new pricing strategies. To be clear, Xbox is still expected to be the underdog in the console war. Sony sold more PlayStations last time around, and PlayStation has a stronger brand in markets outside of the U.S. However, Microsoft is clearly continuing to invest in its gaming division with its eye on the long term.