Shares of JinkoSolar (NYSE:JKS) rocketed 46.6% higher in October, according to data from S&P Global Market Intelligence. The China-based solar panel manufacturer rose following strong earnings report released toward the end of September, then accelerated as polls showed an increasingly likely Democratic win in the November elections. Yet perhaps the biggest reason for the stock's rise was a pledge by China to cap emissions by 2030 and become carbon neutral by 2060. 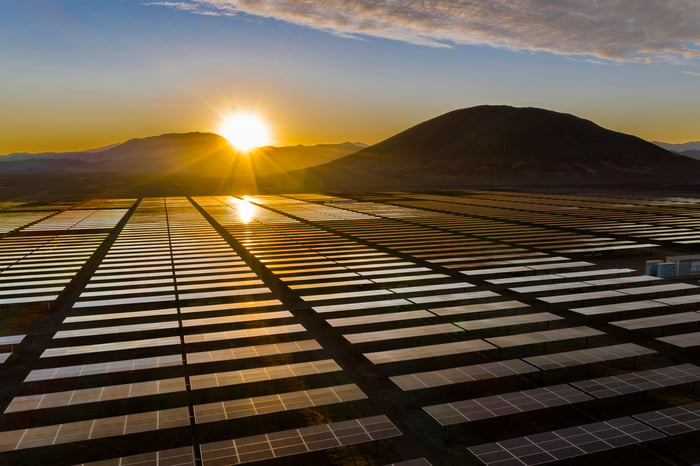 At the end of September, Jinko reported strong fiscal second quarter earnings. The company shipped modules toward the high end of guidance, increasing revenue 18.8% to $1.2 billion, with earnings per share of $0.93 beating analyst estimates by a handy $0.24. Management also announced an acceleration of GW production targets to 30 GW before the end of 2020, up from an initial target of 22 GW earlier this year.

Jinko, as a Chinese company, may have been encouraged to do so after Chinese President Xi Jinping pledged at a meeting of the U.N. General Assembly to accelerate China's progress to peak emissions to before its previous goal of 2030, and achieve zero net carbon emissions by 2060, saying, "Humankind can no longer afford to ignore the repeated warnings of nature."

Then, of course, as the U.S. November election drew closer, Joe Biden consistently polled ahead of Donald Trump, and talk of a "Blue Wave" circulated, which could lead to a more aggressive U.S. solar energy policy. That Blue Wave wave didn't quite happen, with the outcome of the Senate still a question mark; however, climate policies will likely still be a central issue for the incoming Democratic Administration and House of Representatives.

After such a big run in solar stocks and JinkoSolar in particular, there may be some cooling off in the offing; however, with the difficult solar panel industry more consolidated today than in years past, and continuous cost reductions making solar energy cost effective against fossil fuels even without subsidies, Jinko's future, along with those of other solar industry leaders, looks bright.