Pfizer this morning announced that its new coronavirus vaccine is 90% effective at preventing COVID-19. Is this good news?

For most stocks, yes. The Dow Jones Industrial Average is up nearly 4.5% at 2:25 p.m. EST. And yet, while most stocks are flying higher today, there are three notable exceptions: 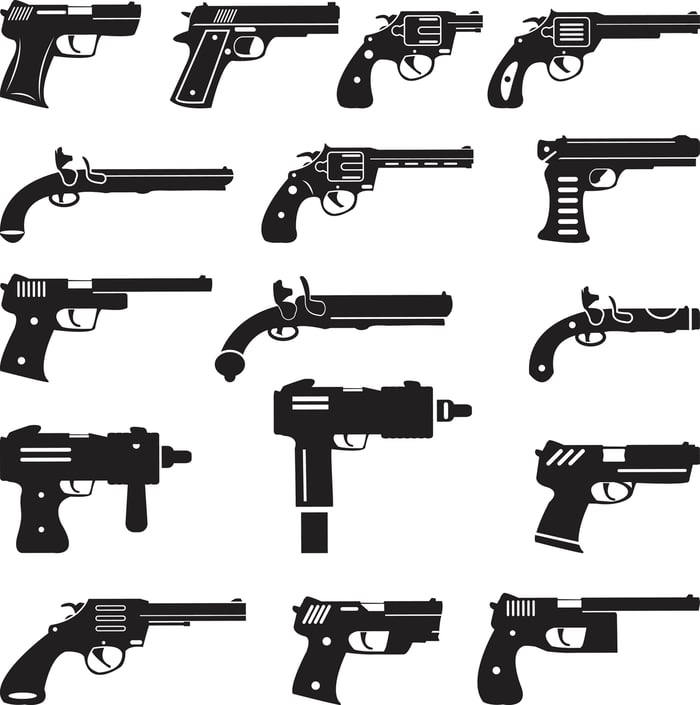 So what makes these three stocks different from all the rest on a day like today? One word: guns.

And two more words: the election.

As you may have heard, over the weekend, all of the major news networks came to the conclusion that President Donald Trump has lost the 2020 presidential election, and Democrat Joe Biden is now the president-elect. The change in party occupying the Oval Office, combined with a still solidly Democratic House of Representatives and the possibility of Democrats taking the majority in the Senate, has investors in gun stocks worried that a new round of firearms regulation may be in the offing.

And they're worried that may be bad news for Smith & Wesson and Sturm, Ruger, the two big publicly traded firearms manufacturers, and also Vista Outdoor, which manufactures ammunition.

Historically, this has been a bad bet. The fact is, the threat of gun regulation often scares gun buyers into buying more guns to stock up "before they ban 'em," so to speak. Whether or not the feared regulation actually materializes, the short-term effect of such fears is generally to increase gun sales, not decrease them.

Still, there are other reasons for gun investors to worry. According to the latest data from S&P Global Market Intelligence, neither Smith & Wesson nor Vista Outdoor are currently profitable, and unprofitable companies don't often make for promising investments. It'll take more than an act of Congress to change that fact.

That being said, I'm a bit more optimistic about Sturm, Ruger stock. For one thing, it's making money -- $67 million over the past 12 reported months, enough to give it a very reasonable-seeming price-to-earnings ratio of 17.9. For another thing, Ruger's earnings have been rising, and analysts who follow the stock predict its earnings could hit $4.50 per share by the time this year is over. At current prices, that would work out to a P/E of just 14.1 on Sturm, Ruger stock -- and that's without any rush to buy guns.

I have to say therefore that, despite all of the selling we're seeing today, voters' decision to put a Democrat back in the White House might actually end up being good news for Sturm, Ruger stock.