The average stock on the S&P 500 pays investors a dividend that's normally no better than 2%. And with the index up by more than 6% this year, many of those payouts are even lower than normal amid rising stock prices. However, the good news is that there are still many dividend stocks that pay much more than that, allowing investors to get more for their money.

Walgreens (NASDAQ:WBA), Citigroup (NYSE:C), and Intel (NASDAQ:INTC) are among some of the bigger-name stocks out there that pay better than 2% per year, and each is a company you should consider adding to your portfolio today. Investors have been bearish on these stocks in 2020, which has made them absurdly cheap, and investing in them could set you up for some great capital gains in the years ahead. 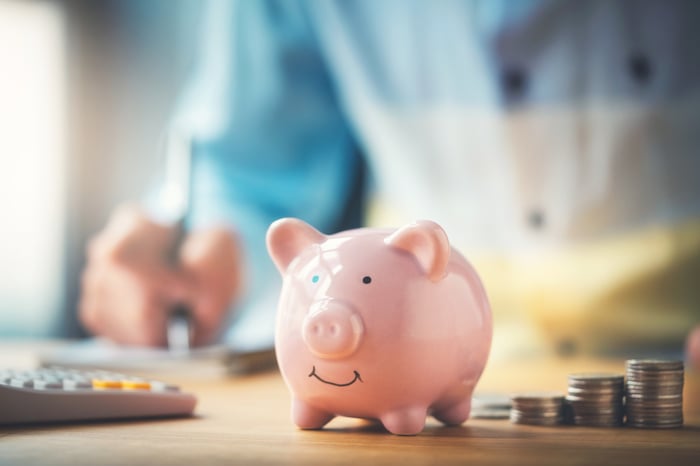 Pharmacy retailer Walgreens isn't getting much love this year, as its shares are down more than 33% thus far. Although the stock's been underperforming the S&P 500 by a wide margin, the business itself still looks strong. On Oct. 15, the Illinois-based business reported its year-end numbers for the period ending Aug. 31, and they showed modest growth. Sales of $139.5 billion for the year were a 2% improvement from the previous year's numbers. And for the quarter, sales of $34.7 billion were up by a similar percentage. The number investors felt a lot more negative about was net earnings, which were down 89% to just $456 million for the full year. However, impairment charges of $2 billion were a big part of that. The company also noted that it took on more expenses due to its "transformational cost management program," which management expects will be generating annual cost savings of at least $2 billion by 2022.

A sound business is important for the stability of a dividend. Today, Walgreens pays its shareholders a quarterly dividend of $0.4675 that yields 5.2% annually. What makes it an even better income investment is that the company is a Dividend Aristocrat, having raised its payouts for 45 years in a row.

The healthcare stock's price-to-earnings (P/E) multiple of over 39 looks high today. But because of the impairment and the poor bottom line this year, that's a bit misleading. Its forward P/E, which takes into account analyst forecasts for the next year, is incredibly cheap at just 8. By comparison, the average stock in the Health Care Select Sector SPDR Fund (NYSEMKT:XLV) trades at a P/E of 24.

Another stock that's been hit hard this year is Citigroup. Down 40% in 2020, its shares are struggling mightily, and it makes sense why: Investors haven't been thrilled with financial stocks during the recession, and fear the present and future economic and financial challenges of the downturn.

But there are signs that things are improving for the big bank. On Oct. 13, it released results for the third quarter, which ended Sept. 30. Its net income of $3.2 billion was more than double the $1.3 billion profit it recorded in the second quarter. A key reason for the difference: Citigroup wasn't building up its allowance for credit losses (ACL) in Q3. Its ACL build for this past quarter totaled $314 million -- a fraction of the $5.6 billion charge it incurred in Q2 (but still more than the $158 million it recorded in the prior-year period). While net income was still down 34% from the $4.9 billion that Citigroup made in Q3 last year, the New York-based company is giving investors hope that its ACL may be strong enough to last the recession and that it won't need to continue building up those reserves, at least not to the size that investors saw in Q2. And that could mean more stability for its bottom line. Revenue of $17.3 billion was down a much more modest 7% as sales from global consumer banking declined by 13%.

Overall, it's still not a terribly bad picture for Citigroup given that the economy's not in great shape right now. For contrarian investors, it can be an opportune time to take advantage of the dividend, which is yielding a high percentage due to the stock's sharp decline this year. Currently, Citigroup's paying investors a quarterly dividend of $0.51 that on an annual basis yields 4.9%. Although it's not an Aristocrat, Citigroup's hiked its payouts in recent years; they're up from $0.16 in early 2017.

Trading at a forward P/E of just 11.5, this is another relatively cheap stock compared to its peers. The average holding in the Financial Select Sector SPDR Fund (NYSEMKT:XLF) trades at a multiple of 15 times its earnings.

Tech company Intel has been the best-performing investment of the three stocks on this list, falling just 21% in value this year. The company has been struggling during the pandemic as companies cut costs and avoid unnecessary spending. The cloud is one place where there are signs for optimism, however. Management noted that cloud revenue in its data center group (DCG) increased by 15% year over year this past quarter. However, that wasn't enough to offset the 47% decline in the enterprise and government part of DCG, which was previously growing at a rate of 30% or better. The total revenue the California-based business reported on Oct. 22 for the third period ending Sept. 26 was $18.3 billion, down 4.5% from the same period last year. Its bottom line of $4.3 billion declined 29%.

But as with Citigroup, Intel will likely see its numbers strengthen as the economy recovers. The positive takeaway for investors today is that Intel remains profitable and its overall sales numbers haven't started a nosedive.

The tech stock continues to pay a quarterly dividend of $0.33, which it's increased over the years. But like Citigroup, it's not an Aristocrat. It's yielding 2.9% today, which makes it the lowest on this list, but still better than the S&P 500.

At a forward P/E of 9.5, it's also trading at a dirt cheap multiple when compared to the average of 33 among the holdings in the Technology Select Sector SPDR Fund.

Compared to the S&P 500, these stocks may look like awful buys right now: 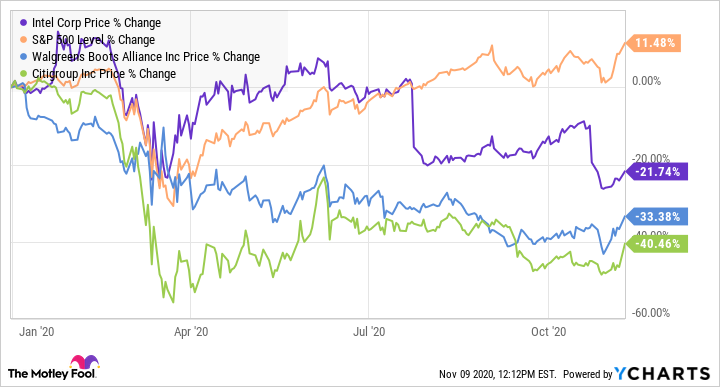 However, their businesses are still in good shape. Walgreens is holding steady, even achieving modest sales growth this year. Citigroup isn't stockpiling its ACL anymore, and Intel is showing growth in its cloud business. When the economy recovers, these companies will improve their performances, and in turn, their stock prices will rise. But these attractive dividend yields could be long gone by then, which is why investing now in companies like these -- while their values are cheap -- could be a great option for investors looking for recurring income.