For more than half a decade, European space giant ArianeGroup has struggled to compete with SpaceX on price. Relative to the $62 million launch cost of a SpaceX Falcon 9, the $175 million price tag on ArianeGroup's workhorse Ariane 5 nearly tripled the cost. So how would Ariane make itself price competitive?

By building an Ariane 6 rocket that costs half as much.

Introducing the Ariane 62 and 64

Built in two configurations, a central core surrounded by either two (Ariane 62) or four (Ariane 64) P120C boosters, Ariane boasted back in 2016 that its new rockets would drive down per-rocket costs to as little as $77 million (for the 62) and $126 million (the 64). 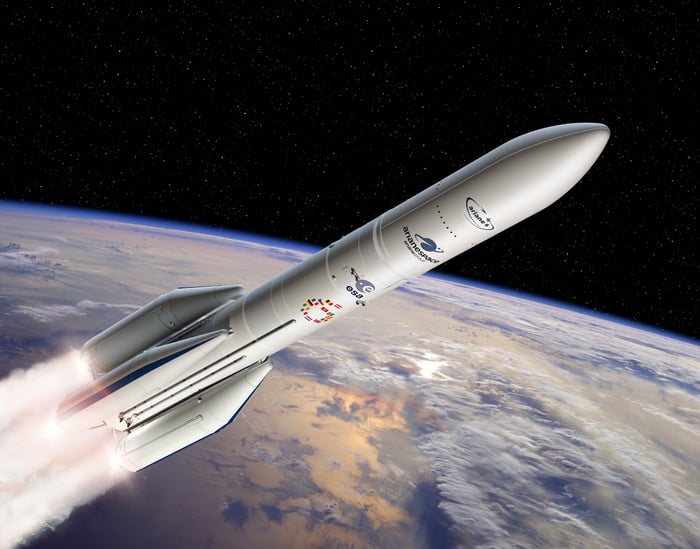 At those prices, the Airbus (OTC:EADSY) subsidiary still wouldn't quite be able to match SpaceX's offering, but it might get close enough that European customers could grin and bear it, eat the extra cost, and support a local manufacturer instead of giving their business to the Americans. And with added payload capacity, the Ariane 64 might even have some advantages over SpaceX's promised Falcon Heavy rocket.

The plan might have worked, too, but for the fact that, as Ariane was evolving, SpaceX wasn't sitting still. Through steady improvements in its engines and fueling technology, SpaceX grew the payload capacity of both the Falcon 9 and its larger Falcon Heavy cousin, to the point where a Falcon 9 now lifts nearly twice the payload (8.3 metric tons) to geosynchronous transfer orbit (GTO) as Ariane 62 (5 tons) plans to, while the Falcon Heavy's payload to GTO (26.7 tons) positively dwarfs the Ariane 64's mooted capacity of 10 tons.

Even worse for Ariane, as SpaceX was driving up its payload capacity, it was driving down its prices. In fact, according to the most recent estimates, a fully reusable Falcon 9 rocket now may cost SpaceX as little as $36 million to launch. That's not necessarily the price SpaceX is charging, but based on the lower cost of reusing rockets, it now appears SpaceX could charge less than half for a SpaceX launch than Ariane can charge for an Ariane 6.

And then things got even worse for Ariane.

In an announcement and conference call held by European Space Agency (ESA) General Director Jan Worner and Director for Space Transportation Daniel Neuenschwander held Oct. 29, ESA blamed COVID-19-related delays, plus certain technical issues and development delays, for the later launch date. ESA also appeared to lay the groundwork for even more delays, noting that it expects to continue launches on the Ariane 5 rocket through the end of 2022 or even 2023 -- which probably wouldn't be necessary if Ariane was certain it will have its new Ariane 6 ready by mid-2022.

With so much work still to be done, ESA advised that Ariane will be seeking additional subsidies from European member states to complete the rocket, increasing Ariane 6's development cost to about $4.4 billion total.

Here's what this means for Ariane and for Airbus -- and for everyone who competes with it in the field of space launch (SpaceX first of all, but also United Launch Alliance (ULA) owners Boeing and Lockheed Martin).

Begin with the fact that when ArianeGroup first announced plans to develop Ariane 6 with a projected $77 million/$126 million per-launch cost, the year was 2016 -- and the first launch was expected to happen in 2020. Delaying first launch into 2022 (or later) means that, with inflation, those launch costs are probably already going up (because they were initially quoted in 2016 dollars).

Next, add the additional funding that ESA is requesting for Ariane's development -- $273 million more than originally budgeted. This sum, too, must eventually be recouped from Ariane's customers, implying that launch costs will go up even more.

Finally, consider that delaying launch from 2020 into 2022 (or 2023) means fewer Ariane 6 launches overall, and fewer launches across which the rocket's $4.4 billion total development cost can be spread. This, too, will add to the cost of each individual launch.

While we don't yet know how much more cost we'll be talking about, it seems pretty clear that the costs are going up. And the higher they go, the less price-competitive Ariane 6 will be with competing products from SpaceX and ULA, and the less profitable the rocket will be for Airbus (which, according to data from S&P Global Market Intelligence, is already losing money in its defense and space division).

When you consider that lowering costs was the entire point of developing Ariane 6 in the first place, it's starting to look like that effort is turning into a flop.