It's been an absolutely fantastic year for Novavax (NASDAQ:NVAX); so far in 2020, the stock has skyrocketed more than 2,000%. Novavax belongs to an elite club of drugmakers with coronavirus vaccine candidates in late-stage testing.

Investors hoping for the year to get even better were eager to hear what Novavax had to say in its third-quarter update. Here are the biotech's numbers from Q3, and the bigger story behind those numbers. 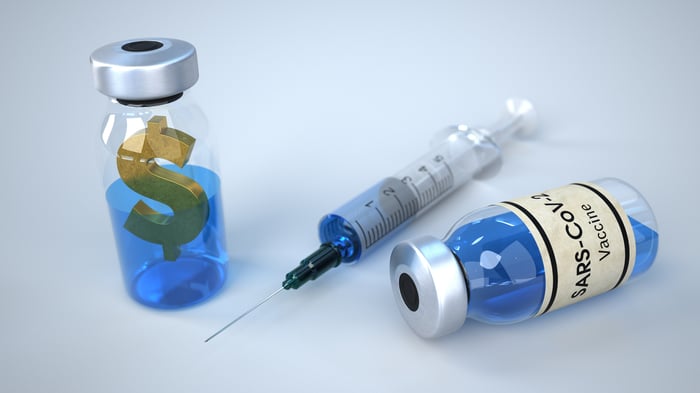 Novavax reported revenue of $157 million in the third quarter, up from only $2.5 million in the prior-year period. However, this result was well below the average analyst revenue estimate of $230.6 million.

Novavax's cash position at the end of the third quarter is arguably much more important than its top- and bottom-line numbers. The company reported cash, cash equivalents, marketable securities, and restricted cash of $571.6 million as of Sept. 30. This reflected a big jump from Novavax's cash stockpile of $82.2 million at the end of 2019.

Novavax's revenue stemmed from funds related to its COVID-19 vaccine candidate, NVX-CoV2373. The company has a development agreement with the Coalition for Epidemic Preparedness Innovations (CEPI) as well as deals with the U.S. government's Operation Warp Speed and the Department of Defense. Combined, these agreements total roughly $2 billion in funding.

The biotech's deteriorating bottom line also was mainly due to its COVID-19 vaccine program. Research and development expenses soared to $294.1 million in Q3, from $18.6 million in the prior-year period. Most of this increase -- $187.2 million -- was connected to manufacturing supply agreements for NVX-CoV2373.

Novavax's general and administrative expenses jumped to $56.9 million in Q3, from $7.9 million in the same period in 2019. The company attributed this increase primarily to higher employee-related costs (especially stock-based compensation expenses), and higher professional fees related to integrating a newly acquired Czech company and to supporting its COVID-19 vaccine program.

Even though Novavax didn't come close to hitting analysts' top- and bottom-line estimates, that's not a big deal. Analysts were pretty much guessing how much funding revenue the company would book in the third quarter, and they guessed wrong.

The bigger stories for Novavax in Q3 were its funding deals for NVX-CoV2373 and its advancement of the experimental vaccine in clinical studies. Novavax's most important clinical achievement in the third quarter was to initiate a late-stage study of the COVID-19 vaccine candidate in the U.K. This study is enrolling 15,000 participants, with full enrollment expected by the end of November.

Novavax is a biotech stock that could soar or sink depending on what happens over the next few months. The company hopes to begin a U.S. late-stage study of NVX-CoV2373 by the end of this month. Any delays could cause shares to tumble.

The first efficacy results from late-stage testing of Novavax's experimental coronavirus vaccine could come by early in the first quarter of 2021. Good news could set the stage for Novavax to make a ton of money. The company has a major supply deal in place with the U.S., and recently inked an agreement with the U.K. to supply 60 million doses of NVX-CoV2373.

It's understandable that investors are primarily focused on Novavax's COVID-19 vaccine program. However, don't forget NanoFlu, the company's promising flu vaccine candidate. Novavax CEO Stanley Erck said the company will provide updates about its efforts to file for U.S. regulatory approval of NanoFlu when a newly formed team set up to guide the process finalizes its strategy.