Shares of Chinese electric-vehicle maker NIO (NYSE:NIO) were rising on Thursday, after a key competitor reported third-quarter earnings that were better than Wall Street had expected.

As of 12:15 p.m. EST on Thursday, NIO's American depositary shares were up about 10.9% from Wednesday's closing price.

NIO rival XPeng (NYSE:XPEV) reported its third-quarter earnings before the U.S. market opened on Thursday, and they were good.

While XPeng (like NIO) isn't yet profitable, the growth numbers were impressive: Revenue of $293.1 million was up over 340% from the year-ago period, while deliveries numbering 8,578 represented an increase of over 160% from the second quarter of 2020.

Better yet for XPeng, 6,210 of those third-quarter deliveries were P7s, the company's newest model. The P7, a plush-riding electric sedan stuffed with advanced technology that starts around $35,000, began shipping in the second quarter. 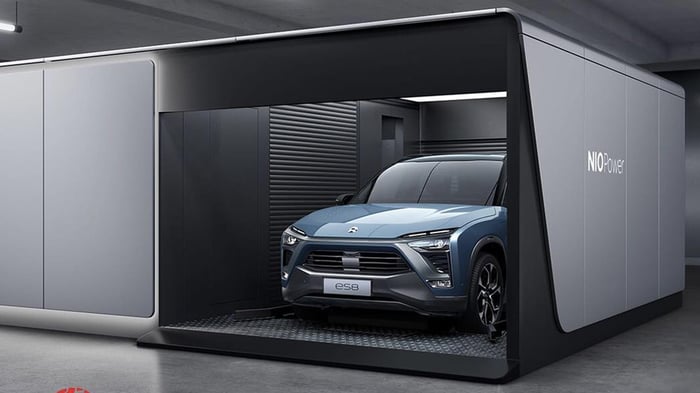 Among other things, investors will be eager to hear about NIO's new batteries-as-a-service initiative, which debuted in the third quarter. Image source: NIO.

What does all that have to do with NIO? Auto investors, at least in the U.S., have recently tended to see NIO, XPeng, and a third company -- Li Motors (NASDAQ:LI) -- as a group. All three are homegrown Chinese automakers focused on what the country's government calls "new energy vehicles," electrics and advanced hybrids.

Simply put, Xpeng's report bodes well for NIO, the largest of the group. NIO will report its own third-quarter results before the U.S. market opens next Tuesday, Nov. 17.