Shares of several names in electric vehicles (EVs) are rising today. The stocks of aspiring electric SUV maker Fisker (NYSE:FSR) and Chinese EV maker Kandi Technologies (NASDAQ:KNDI) were up 20% at their highs. And as of 1:40 p.m. EST on Friday, Fisker was up 14%, Kandi was up 7%, and EV semi-truck maker Nikola (NASDAQ:NKLA) was higher by 5%.

While Kandi had some company-specific news, much of the activity is more likely about the growing EV market in general.

It wasn't long ago that Tesla was the only major publicly traded EV automotive stock. But that has changed, and recent data from China on the sector has U.S. investors getting excited about several newcomers. 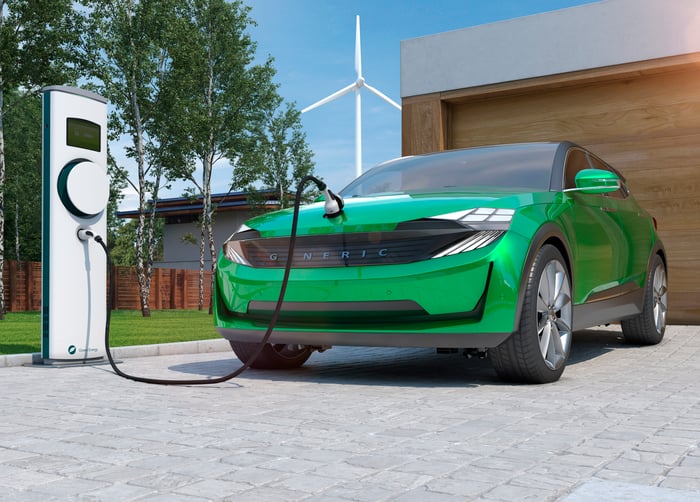 Fisker doesn't plan to have its Ocean midsize SUV in production until the fourth quarter of 2022. But with the company trading publicly since Oct. 30, investors are able to get a jump on that timeline.

Nikola has been in the news for mostly negative reasons since short-seller Hindenburg Research called the company an "intricate fraud" in a report in early September. Nikola has refuted the many claims in the report, but founder and former executive chairman Trevor Milton has resigned over the controversy. But Nikola's highly touted arrangement with General Motors may still come to fruition, giving investors reason to still believe in the company.

Of the three companies, the only real company-specific news was about Kandi Technologies. Yesterday it announced the closing of a registered direct offering for $60 million of common stock and warrants. The offering price was slightly below yesterday's closing price, but the associated warrants are being issued with an exercise price of $8.18, 18% above Thursday's closing price. Kandi said it will use the proceeds for general working capital needs.

More general news from the EV sector is coming out of China. Shares of Chinese EV makers have been soaring recently as sales data for October and outlooks have been published. XPeng (NYSE:XPEV) and Li Auto (NASDAQ:LI) reported earnings over the past two days, and vehicle deliveries are growing significantly.

Li Auto said revenue growth from vehicle sales jumped 28% just from the previous quarter, and it expects even higher sequential growth for the next quarter. XPeng said its third-quarter deliveries jumped 266% from the prior-year period.

Neither of these two companies are profitable yet, but investors are focused on the pace of growth. In the cases of Fisker and Nikola, there are no sales yet. But investors are looking beyond that on the belief that once they go into production, the U.S. market will see an upswing of interest in the same way that EV sales in China is growing.