Investors are often warned that past performance is no guarantee of future results. It's true that in the markets, there's no such thing as a sure thing. But when a company has knocked it out of the park over more than 10 years like Intuitive Surgical (NASDAQ:ISRG) it only makes sense that investors are optimistic about its future prospects.

Intuitive Surgical is the highly innovative and capably led company behind the da Vinci robotic surgery suite. Intuitive was an excellent investment over the last decade, gaining 711%, with the company's revenues and market penetration increasing steadily amid growing acceptance and adoption of its products. As of today, Intuitive is profitable, debt-free, and positioned for strong growth. Given its trajectory, the company will be even more formidable in 2030. 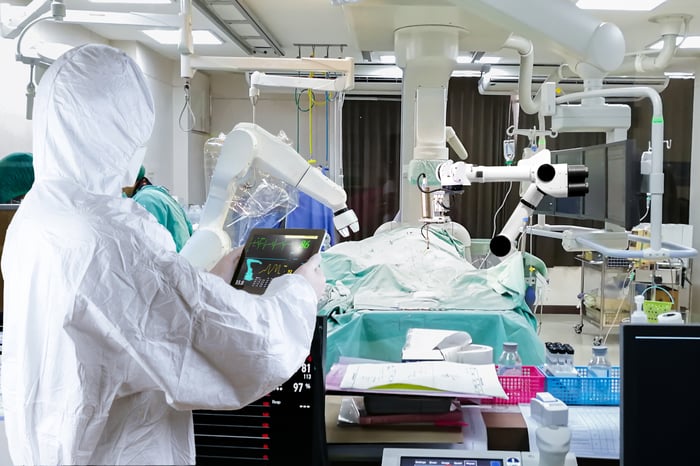 Even though its prospects are strong, investors should take note: The next decade will be evolutionary rather than revolutionary for Intuitive. The first order of business will be to recover from the negative impact of the pandemic. In March, the number of worldwide procedures performed by da Vinci systems fell by roughly half as hospitals everywhere deferred elective surgeries. Then, many hospitals faced a funding crunch that impacted their ability to pay for essential robotic surgery products. Management responded by implementing a financial relief package worth around $120 million which offered flexibly payment terms, extended warranties, and service credits. While expensive, this package is the first step down the road toward a normal level of demand for robotic surgery goods and services, which may take a year or so.

In 10 years, Intuitive Surgical will be even more entrenched in its position as a result of consistent penetration of its market, though competitors will almost certainly be starting to challenge its dominance. Management will need their research and development investments to continue paying off to keep the company healthy through 2030. 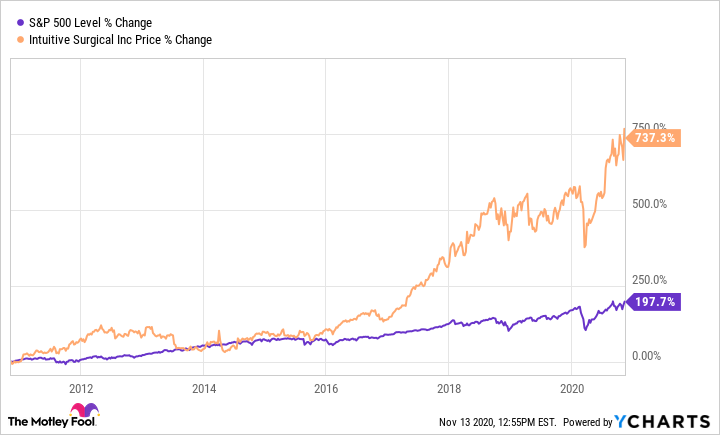 To ensure that it has a steady supply of access to innovation as it grows, Intuitive recently launched a venture capital fund intended for investment in minimally invasive care technologies. The fund currently has $100 million ready to invest, and it's reasonable to think it will soon initiate operations. By creating a separate investment fund, Intuitive is ensuring that it doesn't need to take on 100% of the exorbitant research and development costs that will create the robotic surgery technologies of the future. It'll also gain the ability to potentially buy out companies that could become its competitors in the long term.

Don't expect Intuitive's internal research and development activities to taper off now that its venture capital wing is taking off. By 2030, the company will have realized its goal to expand in Asia and the E.U. by seeking additional regulatory clearances in each region. In the U.S., the da Vinci robot system will be approved for more and more general surgeries, and it may become more prevalent in specialty practices as well.

Expect Intuitive to also develop new products for pre- and post-operative care, like imaging systems and software analytics suites. These will most likely build on the successes of its lung biopsy suite, which is currently its only product line other than the da Vinci robots. Finally, the company will continue to develop new surgical tools and adjacent products for use with its da Vinci units, such as its Iris augmented reality surgical guidance systems.

Recurring revenues will continue to grow in the face of competition

The number of surgical procedures performed by robots worldwide has been expanding with double-digit growth for several years, and Intuitive predicts that this trend will continue. General surgery has seen the largest increase in utilization of robotics since 2016, and it will likely continue to drive growth in demand for Intuitive's products. Gynecology and urology procedures are also becoming more common. And, while growth in thoracic surgeries has been quite slow over the last few years, it appears to be gaining traction, which means that it may start to grow more rapidly in the long-term. All of this is excellent news for the company's investors.

Intuitive's business model has three sources of revenue: Surgical robots, instruments and accessories for surgical robots, and maintenance contracts. In total, yearly revenue has exploded, growing from $1.05 billion in 2009 to reach $4.47 billion last year. Free cash flows have similarly expanded over the same period. 72% of its revenues are recurring, so it doesn't need to sell additional robots to continue to grow. This will work heavily in its favor as it expands its base of installed surgical suites over the next 10 years. Of the current base of systems, 12.7% are leased rather than purchased outright. Especially if management decides to emphasize leases rather than equipment sales, it's likely that leasing will become more common, which would fortify recurring revenue.

Even if competitors try to steal Intuitive's market share, they probably won't be able to affect its recurring revenue, at least in the short term. Hospitals won't want to retrain their surgeons on a new robotic surgery system, which gives Intuitive a small but significant moat. It also means that when Intuitive develops new accessories for the da Vinci, the company will be able to increase its revenue from its existing customers. This will also shore up its competitive advantage against other robotic surgery suites by adding functionalities that enable new types of surgery.

Intuitive's position in 2030 will be quite powerful, and its stock is very likely to grow strongly from now until then. Between its growing moat, consistent investment in research and development, and an expanding market that it seems destined to influence from top to bottom, Intuitive is on its way to becoming a monster.