Shares of Moderna (NASDAQ:MRNA) were sliding 5.5% lower as of 11:28 a.m. EST on Tuesday. The company announced earlier in the day that it had secured a supply deal with the U.K. for experimental coronavirus vaccine mRNA-1273. Moderna also reported that the European Medicines Agency (EMA) has begun a rolling review of its regulatory filing for approval of the COVID-19 vaccine candidate.

Both of these announcements were positive news for Moderna. So why is the biotech stock falling? The most likely reason is that investors are taking profits off the table after Moderna reported great interim efficacy results from a late-stage study of mRNA-1273 on Monday. 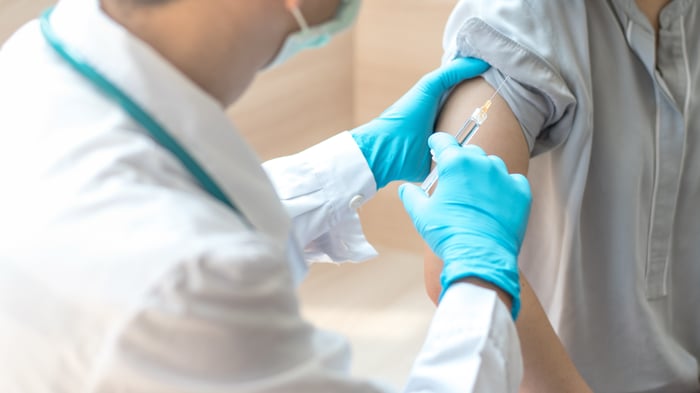 Today's downswing for Moderna doesn't mean much in the big scheme of things. Profit-taking following a major announcement isn't unusual. However, it doesn't impact Moderna's prospects at all.

Actually, the biotech's prospects now appear to be better than ever. Moderna reported 94.5% efficacy for mRNA-1273 on Monday with a solid safety profile. That should bode well for the COVID-19 vaccine winning Emergency Use Authorization (EUA) in the U.S. and regulatory approvals in other countries.

Moderna's supply agreement with the U.K. is the latest in a string of deals with other countries, notably including the U.S. The company appears to be well on its way to lining up buyers for most if not all of the 500 million or so doses that it plans to produce in 2021.

However, Moderna's market cap of close to $35 billion already prices in much of the company's prospects for mRNA-1273. This makes the stock more volatile than it would otherwise be.

The main thing to watch with Moderna now is the company's anticipated filing for EUA for mRNA-1273 with the Food and Drug Administration. The biotech has previously stated that it expects to have enough safety data for this filing by Nov. 25, 2020. Assuming Moderna wins EUA for its COVID-19 vaccine, today's decline will almost certainly be totally forgotten.