Nike (NYSE:NKE) shares have posted strong returns this year, and some investors may wonder whether it's time to take profits. The footwear giant already has earned its blue-chip status through consistent performance. However, Nike may be about to give its earnings growth a significant boost by forging a closer relationship with its customers.

Time to join the club

Well before COVID-19, Nike was building digital tools to connect with the people who wear its shoes and athletic gear. In 2009 , Nike launched the Training Club app, which evolved into the company's portable workout solution. 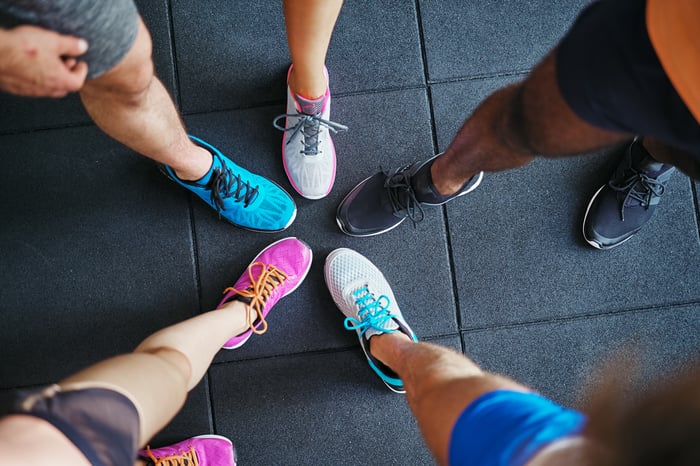 The  Nike Training Club offers over 100 class-style workouts, plus nutrition and wellness information. During the worst of the pandemic, as gyms closed and millions had to workout from home, Nike had two choices. Option one was to leave the Training Club premium subscription at $14.99 per month. Option two was to widen its reach and make its premium subscription free to all U.S. consumers. Nike decided to go with option two.

The strategy seems to be working. After making the app free in March, Nike said it witnessed a more than 100% annual increase in weekly active users. This increased usage has continued throughout 2020. Nike's CEO, John Donahoe II, said in the company's Q1 2021 conference call, more than 50% of members recorded a workout in the most recent quarter.

Though the Training Club is driving results in traditional workouts, Nike also offers a stand-alone app for the running enthusiast. Nike created the Nike+ Run Club   in the middle of 2016. This app connects millions of runners to experts ready to guide them on their way.

When most of the world was on a stay-at-home order early this year, exercise was an escape. Running has been a popular pastime, and Run Club witnessed huge growth in downloads this year. According to Donahoe, Nike reported four consecutive months of more than 1 million downloads.

The footwear giant helps runners with tracking, guided runs, and encouragement from professional athletes. This is a perfect target market for Nike, since runners tend to replace their footwear more frequently. A non-runner might keep a pair of shoes for a few years. A runner averaging 20 miles  per week may replace their shoes every four to six months.

From regular workouts to running, Nike isn't just about shoes for utility. The company wants customers looking for unique experiences and exclusive releases. Nike's SNKRS app is the place to go for hard-to-find designs and the newest product launches. The exclusive footwear app was launched in 2015, and it helps users to learn about shoe history and design, and alerts them to exclusive deals. SNKRS also allows users to reserve new releases and schedule shoe pickups from their closest Nike retailer. Between the Training Club, Run Club, and SNKRS apps, Nike is drawing customers into its footwear portfolio.

Investors can see the benefits of the footwear giant's focus on a direct customer connection through apps over the last five years. Nike's four-year average growth in total revenue has been 2.4% per year. During this same time, Nike released most of its digital apps, and direct sales increased an average of 12% per year. 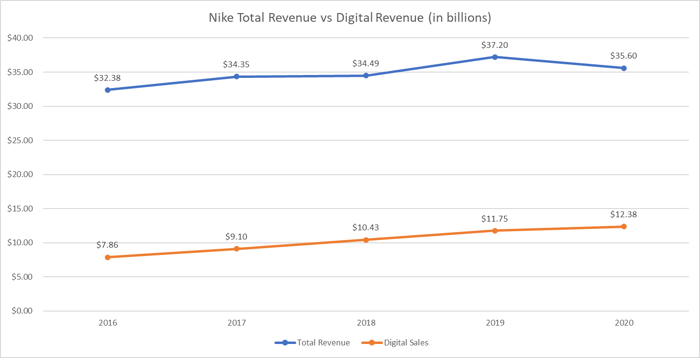 Though fiscal 2020 was obviously a tough year, Nike's most recent quarter shows a clear recovery. Though overall revenue was flat on an annual basis in constant currency, direct sales increased by 13% by this same measure.

Over the last three years, Nike's direct sales have increased from 28.7% of the company's total in 2018, to more than 33% during fiscal 2020. On Nike's Q4 2020 earnings call, CFO, Matthew Friend, gave investors insight into how important direct sales could be going forward. In short, he said that for each additional sale via digital channels, Nike generates twice the revenue and twice the operating income. Equally important is Friend also said that he believes Nike's total business could end up being 50% from digital in the "foreseeable future."

To get an idea of how significant Nike's digital business transformation could be, let's look at how the footwear giant's most recent quarter would have changed if digital sales represented 50% of the total. As a quick preview, if Nike generates twice the revenue from digital, this means $2.12 billion in additional revenue. Since Nike also gets twice the operating income, this $2.12 billion would carry an operating margin of 32.4%, or an additional $686.9 million. If we follow these assumptions down the income statement, Nike ends up not only with significantly faster revenue growth, but also much faster EPS growth.

In the most recent quarter, Nike reported that total revenue declined by 0.6%, while diluted EPS increased by 10%. If digital sales represented 50% of the total as in the table above, Nike's revenue would have increased by 19.3%, and diluted EPS would have jumped by 55.8% year over year.