Airline stocks have been surging as vaccine hopes benefit the sectors most affected by the COVID-19 pandemic.

Delta Air Lines (NYSE:DAL) has been one of the leading airlines in the industry, and its stock has been trading up on the news. Should investors ride the wave higher, or is Delta stock getting ahead of itself? 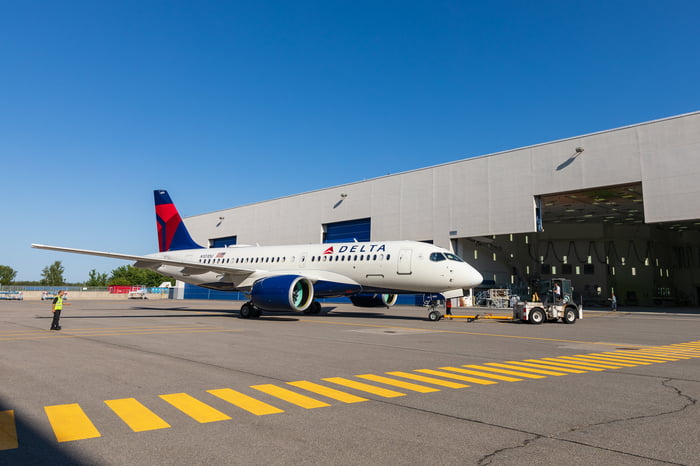 Given how the pandemic has altered our way of life, it shouldn't be surprising that Delta's year-over-year (YoY) numbers are ugly. Even as air traffic picked up in the third quarter, Delta reported a GAAP pre-tax loss of $6.9 billion, or $8.47 per share on total revenue of $3.1 billion. Delta's adjusted third-quarter revenue of $2.6 billion was 79% lower compared to the same period last year.

The YoY results are terrible. But sequentially, the numbers show improvement. As bad as the company's third-quarter results were, they were comparatively better than the second quarter GAAP pre-tax loss of $7 billion, or $9.01 per share on total revenue of $1.5 billion.

Investors may be asking themselves why airlines continue to post steep losses, given that other industrial dividend stocks are returning to growth. The main reason the numbers are bad is that people aren't flying like they used to. The Transportation Security Administration (TSA) tracks average daily throughput, or the passengers who go through its security checkpoints. Based on that data, traffic is down 65% YoY so far in November -- showing no improvement from October's numbers.

In fact, air traffic has only improved a few percentage points per month since July. In response, Delta has reduced costs by lowering capacity. It reported 63% lower YoY capacity in the third quarter.

Decreasing capacity has helped lower costs, but the company continues to lose a substantial amount of money. Blindsided by the drop-off in air traffic in late March, Delta was burning through an astounding $100 million per day. It averaged daily cash burn of $43 million during the second quarter, but noted it only burned $27 million or so per day in June, 70% less than it was burning in March. Third-quarter daily cash burn averaged $24 million, but $18 million in September. After how it's been wounded by the pandemic, it's encouraging to see Delta apply pressure to its problems, but it hasn't stopped the bleeding.

Hope is a dangerous thing

The short- to medium-term news driving optimism in Delta stock is a vaccine rollout. The bullish case is that a vaccine would bolster the overall economy, and in the process, lead to a surge in air travel from deprived vacationers. Moderna and Pfizer's vaccine news is encouraging, but a vaccine's effectiveness doesn't magically solve all of Delta's problems. It's unclear how long it would take to produce and distribute vaccines to hundreds of millions of people. Until that happens, Delta's path to profitability remains in question.

The short term should give us a better idea of Delta's improvements unrelated to the vaccine. Along with the summertime, the holiday season tends to be one of the busiest times to fly. If passengers trust Delta's safety precautions, then the holiday season could bring the airline closer to breaking even. Keep in mind that Delta originally predicted it would reach $0 daily cash burn by the end of the year, a forecast that looks less likely given its third-quarter results.

With Thanksgiving and the holiday season just around the corner, investors should keep an eye out for how traffic picks up or continues to stall in the fourth quarter. If it doesn't improve, or Delta isn't able to meaningfully reduce its cash burn, then the company may not be able to reach breakeven until the vaccine rollout is well under way.

A rising stock price and a declining balance sheet

Delta shares are up 20% since markets surged in response to positive vaccine news on Monday, Nov. 9. The stock is now up an astounding 73% in six months, and down just 35% for the year. A return to profitability and normalcy are good news for Delta Air Lines, but the stock simply isn't as cheap as it was a few months ago. The company ended the third quarter with $21.6 billion in liquidity, which could help it endure more losses if needed. However, mounting debt and months of negative cash flow have taken a toll on its financial health. As a result, Delta's balance sheet is now in its worst shape in five years. 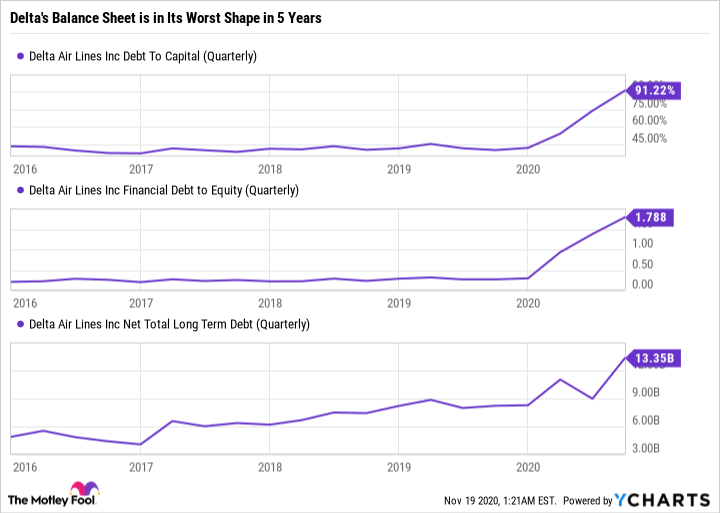 No rush to buy now

Although Delta Air Lines earnings showed signs that it has a plan to return to positive free cash flow by 2022, there doesn't seem to be any rush to jump into the stock at this time. We don't know when or how effective a vaccine rollout is going to be. We also don't know if Delta will benefit from the typical seasonal boost in holiday travel. And of course, the big "if" is whether air traffic can return to 2019 levels, or if there could be long-lasting paradigm shifts away from business travel toward working from home and virtual conferencing.

What we do know is that air traffic -- and Delta's ability to reduce its cash burn -- have only shown modest improvement since June or July. We also know that raising debt may solve short-term liquidity problems, but it also weakens the company's financial health.

The company is arguably navigating the pandemic better than its competitors, and it remains one of the best airlines to buy over the long term. But given the risks, uncertainty, unprofitability, and mounting debt, Delta doesn't seem to be a screaming buy at this time.