If you've ever tucked into a packet of Frito-Lay potato chips while watching a movie at home or refreshed yourself with a can of Gatorade after a gym workout, you would be enjoying one of the myriad brands and products offered by PepsiCo (NASDAQ:PEP). The food and beverage giant owns a multitude of brands that it has built up steadily over the years. Its flagship product, Pepsi, is a brand name you'll see in countless restaurants and supermarkets.

The coronavirus pandemic has, however, hurt a swath of food and beverage companies, as cafes and restaurants have been forced to temporarily shut around the globe due to lockdowns and movement restrictions. As more people work from home and commute less, they also pay fewer visits to food establishments, thus depressing the sales of many food companies.

Investors will rightly wonder if PepsiCo's business has been adversely affected and if growth may have stalled for the company. Does its stock still qualify as a buy? 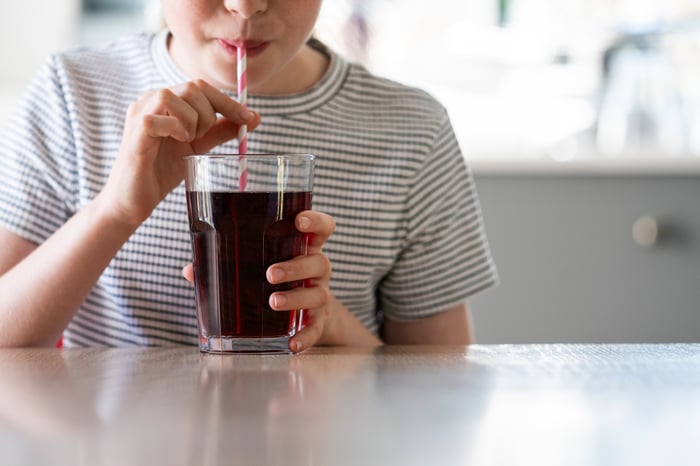 Resilience in the face of adversity

PepsiCo's recently announced third-quarter earnings showed that the company remains resilient even in the face of economic adversity. During the quarter, revenue rose 5.3% year over year while net income increased by 9.1% year over year. The company also saw its gross profit margin expand marginally in the first nine months of the year, inching up from 55.3% to 55.4%. What's more, PepsiCo continued to generate healthy free cash flow of $4 billion during the first nine months, up from $3 billion generated in the same period last year. This is an impressive achievement considering that food and beverage demand was hit badly during this crisis.

CEO Ramon Laguarta emphasized the company's motto of being "faster, stronger and better" in the company's latest earnings call. Being faster involves getting to market quicker by being more in tune with what customers want and using a two-pronged approach to invest in both large, established brands and smaller up-and-coming ones. The company will also invest in its digital capabilities to improve and scale up its e-commerce division, which saw a doubling in revenue during the quarter.

"Stronger" refers to maintaining a lean cost structure and tapping on data analytics to gain insights into customer behavior and wants. And by being "better," PepsiCo intends to do its part for both the community and the environment by championing social justice and conserving precious resources such as water and fuel.

A string of acquisitions

Rather than hunkering down, the company has gone on an aggressive acquisition spree this year, snapping up a major stake in Senselet Food Processing, an Ethiopian company that has a leading position with its Sun Chips brand, in early January. PepsiCo followed this up with a $705 million purchase of Be & Cheery, one of the largest online snack companies in China, which offers a wide product assortment consisting of dried fruits, nuts, and meat snacks.

Without slowing down, the company then announced the mega purchase of Rockstar Energy Beverages for $3.85 billion in March, to gain access to the lucrative energy drinks market. In line with management's focus on energy drinks, PepsiCo entered into an exclusive distribution agreement in April with Bang Energy drinks in the U.S., adding yet another brand to its growing portfolio of energy drinks.

Just two months later, an agreement was signed to acquire the shares of Pioneer Foods Group, an African food and beverage company that manufactures food staples, cereals, and juices, for $1.7 billion. PepsiCo also inked a deal to be the exclusive distributor for Evian brand bottled water with Danone in September.

These acquisitions and collaborations will take time to bear fruit, but signal that PepsiCo remains nimble and opportunistic in purchasing businesses that are complementary to its product portfolio. 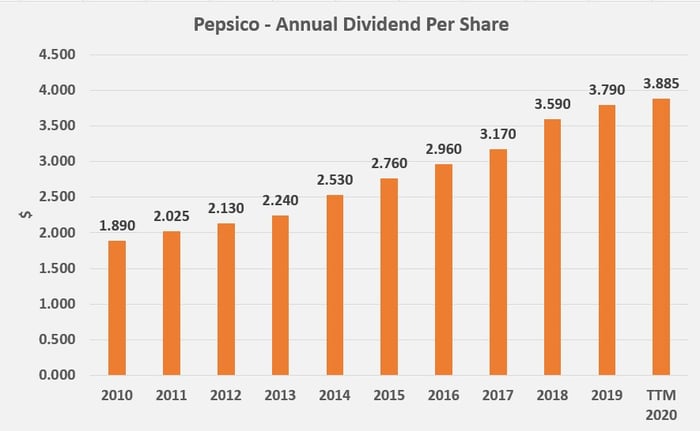 Investors should not forget that PepsiCo has also been growing its dividend steadily over the years. In the last decade, the company has never failed to declare a higher year-over-year dividend. Over the last 10 years, the annual dividend has more than doubled from $1.89 to $3.885, and there is a high probability that the company can continue to increase its dividends for the foreseeable future.

PepsiCo is a steady compounder that has grown both its dividends and its portfolio of products over time. Trading around 28 times its earnings at Friday's prices, it's not expensive if you consider its long track record of profitability, strong brand portfolio, and resilience during crises. The company's recent acquisitions should help to further boost its portfolio's strength and provide the business with more avenues for growth in the future, making its stock a compelling proposition.