Editor's note: This article was written last week. Check out this article for the latest news on AstraZeneca's vaccine.

When it rains, it pours, at least when it comes to effective coronavirus vaccines. With Moderna (NASDAQ:MRNA) joining Pfizer (NYSE:PFE) and BioNTech (NASDAQ:BNTX) this week in the very exclusive club of companies with an effective and safe candidate, it's only a matter of time until the trio start to make money from vaccine sales, assuming they get regulatory approval to do so. In the meantime, there's a decision to make: Which stock will be the best investment?

In my view, it isn't a close call. Now that it has the clinical evidence it needs to validate the scientific approach at the core of its platform, Moderna is going to become a monster. 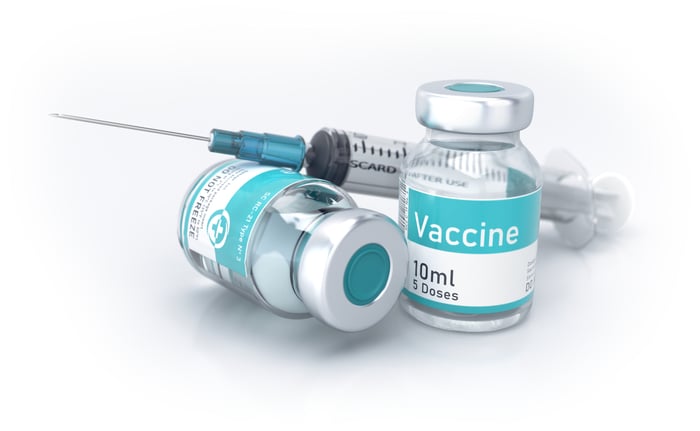 Until Pfizer and BioNTech delivered glowing preliminary results in their phase 3 clinical trials, nobody had ever come close to producing a vaccine composed of mRNA. For a company like Moderna, which aims to become the paramount mRNA medicine company, this fact was quite inconvenient and perhaps even a tad embarrassing. Biotech stocks often live and die by the quality and depth of the scientific evidence backing their core technology platforms, and it simply didn't have any clinical validation for its approach. Now, it has two: One from the third-party effort at Pfizer and BioNTech, and one from its own laboratories. Every single project in its pipeline is now more valuable as a result, and there's little doubt that it will be able to afford the cost of developing new programs in the future.

Furthermore, the company's favorable vaccine readout has rekindled management's dream of producing new treatments with the ease of typing (in its case, genetic) code into a computer. Of course, everyone agrees that drug development will never be that easy, but that hasn't stopped management from trying -- and in this case, succeeding.

After investing heavily into preclinical research automation, Moderna's pipeline is positioned to iterate new medicine concepts rapidly. That's what let it initiate phase 1 clinical trials for its coronavirus candidate in late February, long before its competitors had concluded their preclinical studies. Now that this rapid development capability is backed by a valid scientific approach, it'll be more effective at developing ambitious projects in-house, and it will also continue to attract powerful collaborators like Merck. In the epidemics of the future, it's also highly likely that governments will come knocking to seek help once again.

In short, the company is now spring-loaded to execute its vision at scale. Even if Pfizer and BioNTech sell their candidate effectively, neither is built around mRNA medicines or high-throughput innovation, and neither stand to benefit as much as Moderna.

What if yet another contender produces an effective vaccine?

Given that a plethora of companies are working on coronavirus inoculations, it's only a matter of time before there's fresh competition for market share. AstraZeneca may well be the next to report triumph, with the smaller contenders like Novavax to follow over the next year. But these players don't have as much riding on their candidates as Moderna does. AstraZeneca has plenty of other projects in development and medicines generating revenue. And Novavax has a very promising flu vaccine on the verge of being approved that might catapult it forward even if its coronavirus program flops.

Thus, investors should approach the growing field of proven vaccines by identifying which company stands to gain the most in a holistic sense. For me, that makes Moderna the only real choice, at least for the moment. In terms of the contenders on the horizon, Inovio Pharmaceuticals and Vaxart could eventually rival its potential for growth, but they have a lot of ground to cover before being worth a buy.