Shares of traditional digital payment network operator Mastercard (NYSE:MA) have mounted a comeback since plunging in the early days of the coronavirus pandemic. Although its revenue and net income have fallen off because of the disruption in consumer spending, the stock is up 11% year to date at Monday afternoon's prices.

Further, Mastercard has more good days ahead of it. Investors shouldn't expect it to be a millionaire-maker stock all on its own since it's such a large enterprise already, but the company is a good place to start if you're looking to invest in the premise of a gradual rebuilding of the global economy once the threat of COVID-19 recedes. It's also a solid way to profit from the general migration away from cash. 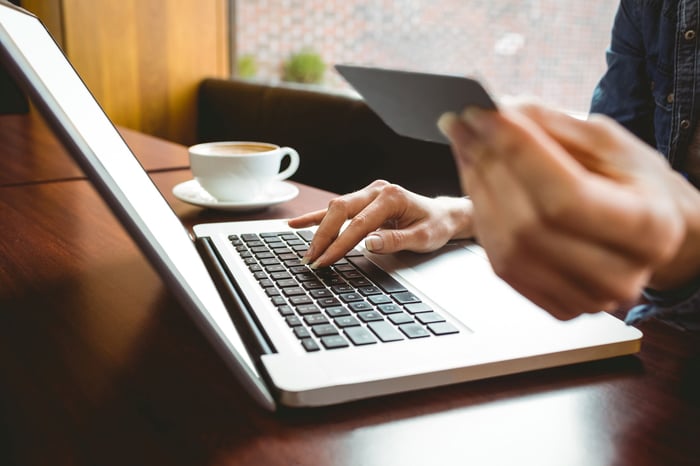 Mastercard's stock gains this year may seem baffling. After all, a less-than-ideal spring quarter (in which revenue and adjusted net income fell 19% and 29%, respectively, from a year prior) was followed by a similarly rough summer. In Q3, revenue fell 14% year over year, and adjusted net income slumped by 27%. With nine months of 2020 now in the books, it goes without saying that this will be a year the payment network company will want to forget.

A large share of Mastercard's troubles stemmed from a steep slide in cross-border transactions (i.e., purchases made using an account that was opened in a different country from the one where the merchant is located). Such transactions had been a key driver of growth at Mastercard, but through the end of September, their volume was down by 29% from 2019 levels. Given that travel restrictions remain in place, and that people are still largely attempting to practice social distancing, the world still has a ways to go before cross-border transactions begin to recover. My bet is that the metric will start notching year-over-year improvements again in the second quarter of 2021 as Mastercard's results begin to lap the pandemic.

Premium pricing, but only in the here and now

Given the ugly financials, Mastercard's stock looks more expensive than ever. It currently trades for 46 times trailing 12-month free cash flow (revenue less cash operating and capital expenditures). There's a good chance that the premium on the stock will increase even further, as profits in the final quarter of 2020 and the early months of 2021 are also likely to be down from the year prior.

Valuation is fluid, though. In pricing this company at its current premium, the market is factoring in Mastercard's longer-term potential, rather than basing its value on its performance right now. Digital transactions are rapidly replacing cash thanks in no small part to e-commerce -- especially in emerging markets. In fact, excluding cross-border transactions, in Q3, the company actually reported year-over-year growth in gross transaction volume (after factoring out the impact of currency exchange rate shifts). The number of switched transactions (the process of linking a payer's and merchant's financial institutions to facilitate the transfer of funds) also increased 5% during the period.

Mastercard has other irons in the fire too. Its data security and related services have remained in growth mode throughout this crisis. It's also building out new payment methods such as its account-to-account transfer service (think of it like PayPal's Venmo, but for companies), which can facilitate faster transactions between businesses.

As it recovers and adds new services, Mastercard's profit margins will also rebound, leading to even faster growth in the bottom line. And that point highlights another reason this stock commands a premium price: Even in challenging times, Mastercard boasts incredibly high profit margins, which provide management with ample cash to invest in growth initiatives. 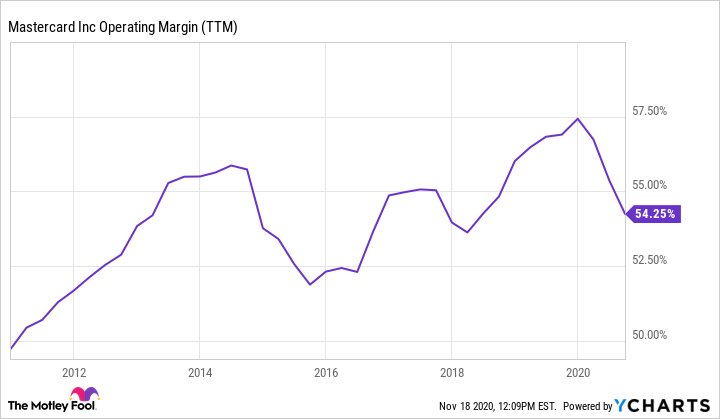 Even with a market cap of roughly $330 billion, Mastercard is still a promising stock for the decade ahead. The growth of digital payments is a secular trend, and while travel and other cross-border economic activities are in a trough right now, they will eventually recover. Mastercard and its peer Visa facilitate the lion's share of digital money movement around the globe, and are therefore solid bets on an eventual economic recovery in travel and general consumer spending. Mastercard won't be a millionaire-maker stock, but there are profits to be made here.