The role of logistics in global crises often goes unnoticed. In the attempt to increase vaccination rates throughout the world, supply chains often have more influence on which vaccines make a difference than the drug itself. Because of this, vaccine development is usually done with supply chain constraints in mind -- but the coronavirus pandemic has thrown some of these rules aside.

So far, the vaccines that have demonstrated efficacy require some kind of carefully constructed cold chain. Pfizer (NYSE:PFE) and BioNTech's (NASDAQ:BNTX) vaccine requires cold storage at negative 70 degrees Celsius. Moderna's (NASDAQ:MRNA) vaccine remains stable for 30 days at the more reasonable temperatures between 2 degrees and 8 degrees Celsius, or six months at colder temperatures. AstraZeneca's (NASDAQ:AZN) candidate, on the other hand, can be stored at regular refrigerator temperatures.

Earlier in the pandemic, logistics companies needed to move personal protective equipment (PPE) all over the globe when demand quickly exceeded supply. Masks, gloves, and gowns don't require any special temperature treatment, but the distribution was still not smooth. In the U.S., few supplies in the national stockpile and a lack of federal coordination led to a frenzy of states bidding against other states, hospitals fending for themselves, and in some cases, individual companies inking deals with foreign governments to obtain their own supply of PPE. As vaccine candidates creep tantalizingly closer to U.S. Food and Drug Administration (FDA) approval, logistics companies are determined to be prepared for the challenge this time around. 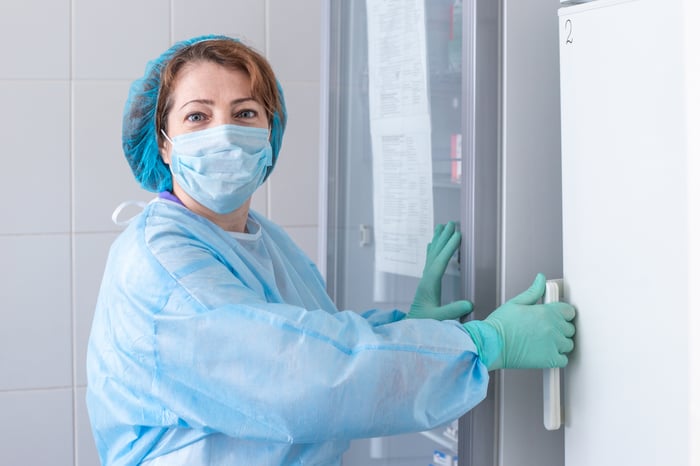 Logistics companies have gotten used to shipping biological material over the years. (Biologics, drugs that contain or are made from living organisms, are estimated to be a $255 billion market growing at more than 7% per year.)

It has been good business for companies like United Parcel Service (NYSE:UPS), FedEx (NYSE:FDX), and DHL Global Forwarding to invest in infrastructure supporting the transportation of this material all over the world. These companies often use freezer farms for tissue and blood samples, as well as vaccines. To support the pharmaceutical industry, FedEx built its Cold Chain Center in Tennessee, near its shipping hub. Most of the temperature controlled rooms are designed for one of two ranges: 15 degrees to 25 degrees Celsius or 2 degrees to 8 degrees Celsius. In addition to cold storage, UPS boasts its own temperature-controlled shipping container, the PharmaPort, that broadcasts its status and location no matter where it is in the world.

This global network will be tested as vaccines begin making the journey from warehouse to airports and cargo terminals, and eventually to clinics and hospitals. Vaccines for measles, tuberculosis, and yellow fever are shipped freeze-dried, with liquids added to the powdered vaccines before injection. Unlike those vaccines, shippers weren't sure which vaccines would be approved. This has made it difficult to prepare for unknowns like the quantity of vials, packaging dimensions, temperature constraints, and how quickly vaccines would need to be administered. Despite the uncertainty, logistics companies have invested in being prepared.

Logistics companies say they are ready

The company is also buying a limited amount of freezers for the U.K., Germany, and South America to ensure overnight delivery nearly anywhere in the world. UPS sees the investment in this cold chain as a competitive advantage given the growth of biologics in the pharmaceutical industry. For its part, FedEx is adding freezers, refrigerator trucks, sensors, and thermal blankets to its arsenal. The company has also built frozen rooms capable of temperatures between negative 25 and negative 10 degrees Celsius. In anticipation of the challenges, Pfizer has created a special case for their vaccine dubbed "the pizza box."

Experts think herd immunity may not be achieved until 70 percent of humanity is vaccinated. To understand how many doses that is, the number of vaccine packages required, lined up end-to-end, would stretch around the world 10 times. Regardless, the World Health Organization (WHO) aims to deliver two billion doses in 2021. Pfizer has said it can create about 50 million doses by the end of the year with half going to other countries. Since the vaccine is administered in a two-dose schedule, that would mean about 12.5 million Americans could be vaccinated by early January. Moderna's vaccine could add another 10 billion to that number.

McKesson (NYSE:MCK) has expanded its existing relationship with the U.S. Centers for Disease Control (CDC) to handle the last mile of distribution of vaccines to the hospitals and clinics where they will be administered. As the primary distributor of the seasonal flu vaccine, the company has experience on its side.

Determining how well it's going

It's much easier to make thousands of doses for a clinical trial than the millions of doses per day that a global vaccination program will require. Once they are produced, maintaining the integrity of gene-based vaccines in super-cold freezers and getting them to those most at risk will be one of the greatest logistic challenges in human history. There is one sign in particular we can look for to know how it's going.

We know from drug makers that enough vaccines to inoculate around 22 million Americans should be produced by the end of the year. Ideally, both the number of doses and the number of vaccinations will be made public. This would allow us to track the initial push to vaccinate healthcare workers. There are currently more than one million doctors, and nearly four million nurses in the U.S. Add in hospital custodians, paramedics, nurse assistants, and others, and you get closer to the approximately 16 million Americans who work in healthcare -- more than six million in hospitals.

I will be keeping a close eye on the number of these workers who get the vaccine, and especially any indication that they are struggling to receive it. Whether it is manufacturability or logistics, any indication that these workers aren't getting the vaccine will set off alarm bells for the general population and should make investors skeptical of companies who can't make distribution happen under the current circumstances.